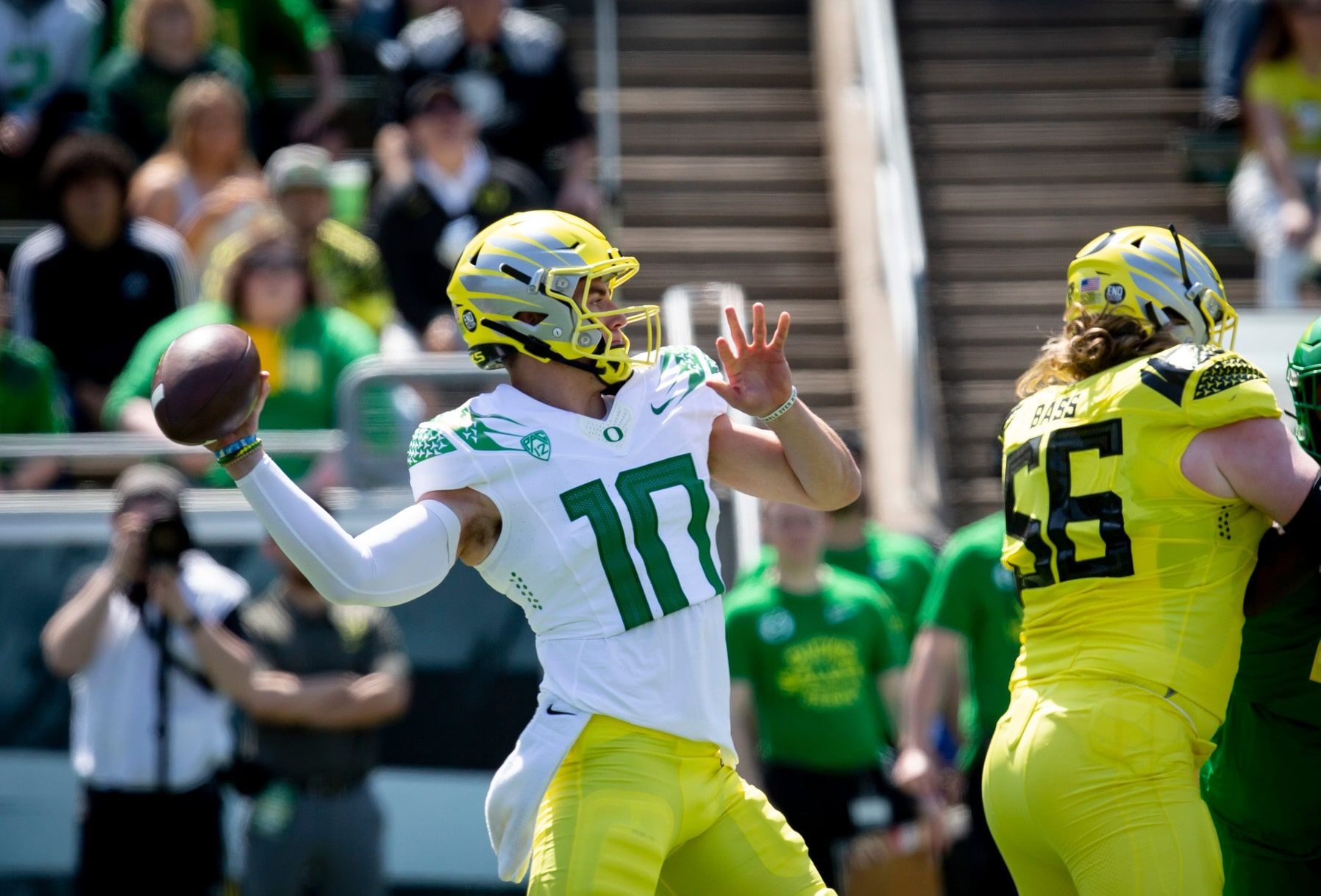 After 4 seasons as Oregon’s head coach, Mario Cristobal bolted for Miami and was replaced with first-time head coach and former Georgia defensive coordinator Dan Lanning. With a National Championship under his belt as a coordinator, Coach Lanning will be ready for his new challenge of leading his own team to the title game.

Can Lanning bring the SEC toughness out West? With just a few weeks remaining before college football begins, it is time to break down the Oregon Ducks.

The Ducks are listed at 90/1 to win the National Championship.

The Ducks started the 2021 season with an undefeated September, including an upset win over Ohio State in Columbus. They started October with an overtime loss at Stanford, who finished at the bottom of the Pac-12 North, thanks to a head-scratching performance from former quarterback Anthony Brown. The Ducks then bounced back by rattling off 5 straight conference wins before traveling to Utah where the Utes held the Ducks to 7 points and ended the winning streak. The Ducks finished the regular season with a win over their in-state rivals and managed to win the Pac-12 North – earning a rematch with the Utes in the conference championship game. Much like the first matchup, Utah took care of business in a 38-10 win, and then Cristobal left for Miami. Oregon finished its season with a 47-32 loss to Oklahoma in the Alamo Bowl.

The Ducks were not quite the offensive juggernaut of years past (36th in points per game), but Brown had his moments throughout the season – throwing for 2,989 yards, 19 touchdowns, and 7 interceptions while rushing for 658 yards and 9 more touchdowns. Furthermore, Travis Dye was a dynamic backfield running mate for Brown, as he accumulated 1,673 total yards and 18 touchdowns. On defense, Oregon left a bit to be desired, ranking 78th out of 130 teams in opponent points per game despite the presence of 5th overall pick Kayvon Thibodeaux.

Lanning will have to replace a few key pieces on both sides of the ball, but still has plenty to work with in his first year as head coach. Brown will be replaced with former Auburn quarterback Bo Nix, who transferred to Oregon to follow newly-hired offensive coordinator Kenny Dillingham. He will be playing behind one of the best offensive lines in college football, as the Ducks have a vast majority of its line production back from a unit that ranked top 10 in average line yards, stuff rate, and opportunity rate a season ago. There is quite a bit of youth at the skill positions around Nix, but the running backs and wide receivers have the talent to thrive in Dillingham’s vertical offense.

Defensively, there is hope in Eugene considering Coach Lanning’s success in Georgia under Kirby Smart. The Ducks could have one of the best linebacker duos in the country in Noah Sewell and Justin Flowe playing behind Brandon Dorlus on the defensive line – who leads all Pac-12 defensive tackles in quarterback hurries and quarterback hits since 2020. The Oregon defense was outside the top 100 on 3rd and 4th down last year, which should be an area of emphasis for the new coaching staff, but an improvement on the defensive end is inevitable under Lanning.

Check out our Pac-12 preview, which includes a couple of best bets!

Despite ample change in the Oregon program, the Ducks should have enough to maintain their winning ways with a veteran quarterback and offensive line, in addition to a better defensive philosophy. Oregon will likely start the season with a loss in a “neutral site” game against the defending-champion Georgia Bulldogs in Atlanta, but the schedule is forgiving after that. The Ducks should benefit from having games against BYU, UCLA, and Utah at home, while their toughest road games will be the back-to-back at Cal and Colorado, as well as the final game at Oregon State. They will also benefit from avoiding USC during the regular season. Considering the Ducks are currently listed as underdogs in just 1 game this season, there seems to be a bit of value on the season win total of over 8.5.