HomeAnalysisNFL NewsPickswise Computer Model best NFL futures bets ahead of Week 5: Chargers the team to bet on after win over Raiders

Pickswise Computer Model best NFL futures bets ahead of Week 5: Chargers the team to bet on after win over Raiders 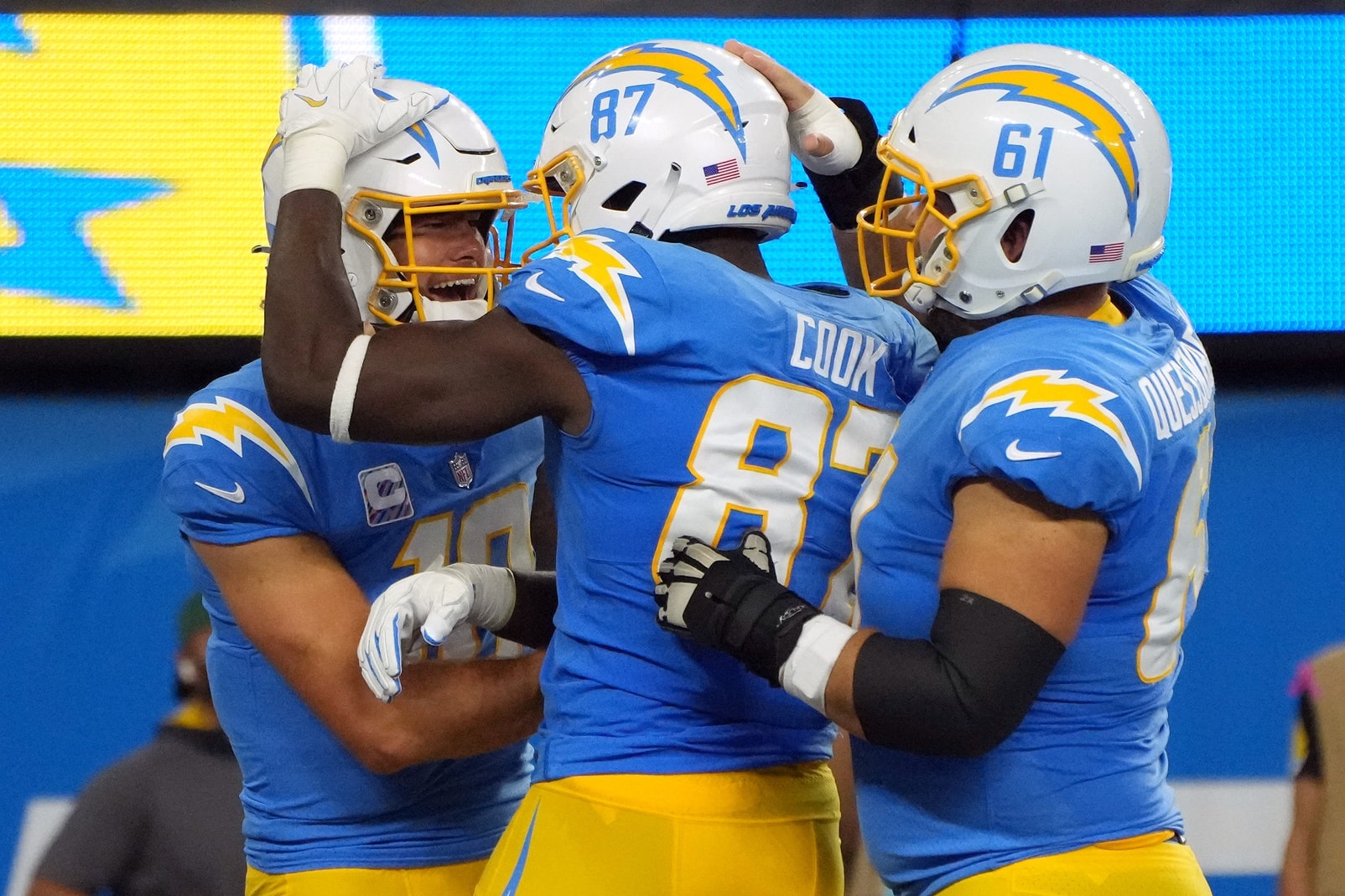 The 2021 NFL regular season is in full flow and every team has now played 4 games. That’s more than enough data for us to gauge who’s looking hot this year, and who looks destined for a high draft pick. One thing you can always get a slice of throughout the season is NFL futures bets.

After simulating the rest of the 2021 season 10,000 times and comparing each outcome’s probabilities to current consensus market prices, the model has picked its best and worst spots for value. Let’s dive into the best NFL futures bets ahead of Week 5, as highlighted by our model.

For two weeks the Raiders held the best value for winning the Super Bowl according to our computer model. Now the team with the value is the one that beat them — the Los Angeles Chargers. The Chargers moved to 3-1 following that win over Las Vegas, and with that coming after their big upset of the Chiefs, Justin Herbert and LA have a lot of momentum right now. Our model suggests now is the time to get on the Chargers bandwagon.

Los Angeles is currently deemed as having a 4.1% chance of winning the Super Bowl by most sportsbooks, but after running the simulations 10,000 times, our model indicates that the Chargers have a Super Bowl win probability of 10.92%. That is a difference of 6.84% compared to their current odds! They are more than 3% clear of the next team with the best value as well — the Baltimore Ravens, who have a difference of 3.81% between betting probability and model win probability. Other teams who are favored by our model include the Cowboys, Raiders, and Cardinals.

You can see the five teams with the best value for betting on the Super Bowl in the graphic below. 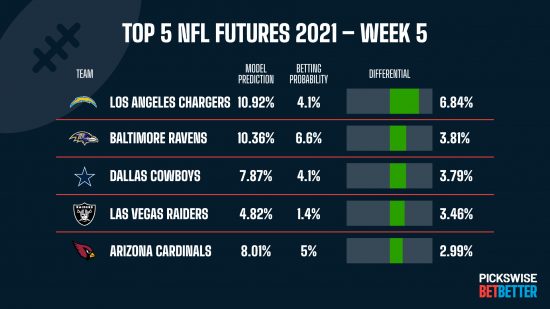 The Chiefs continue to be highlighted by our model as the worst-value Super Bowl bet, despite their crushing win over the Eagles last week. Their odds have shortened again to +550 to lift the Vince Lombardi Trophy, giving them a 12.2% betting probability of winning it. Our model rates them as having a 4.95% chance of winning the Super Bowl, meaning they have a negative difference of -7.21% compared to the betting odds (although that is an improvement on last week’s -7.64%). Our model now rates the Bills as having more than double the chance of winning the Super Bowl (10%).

As was the case last week, the next two teams with the worst value are the Rams (-5.84% difference between betting probability and model prediction) and the Buccaneers (-5.34%), although they have now swapped places. You can see the breakdown for the five worst value Super Bowl bets below. 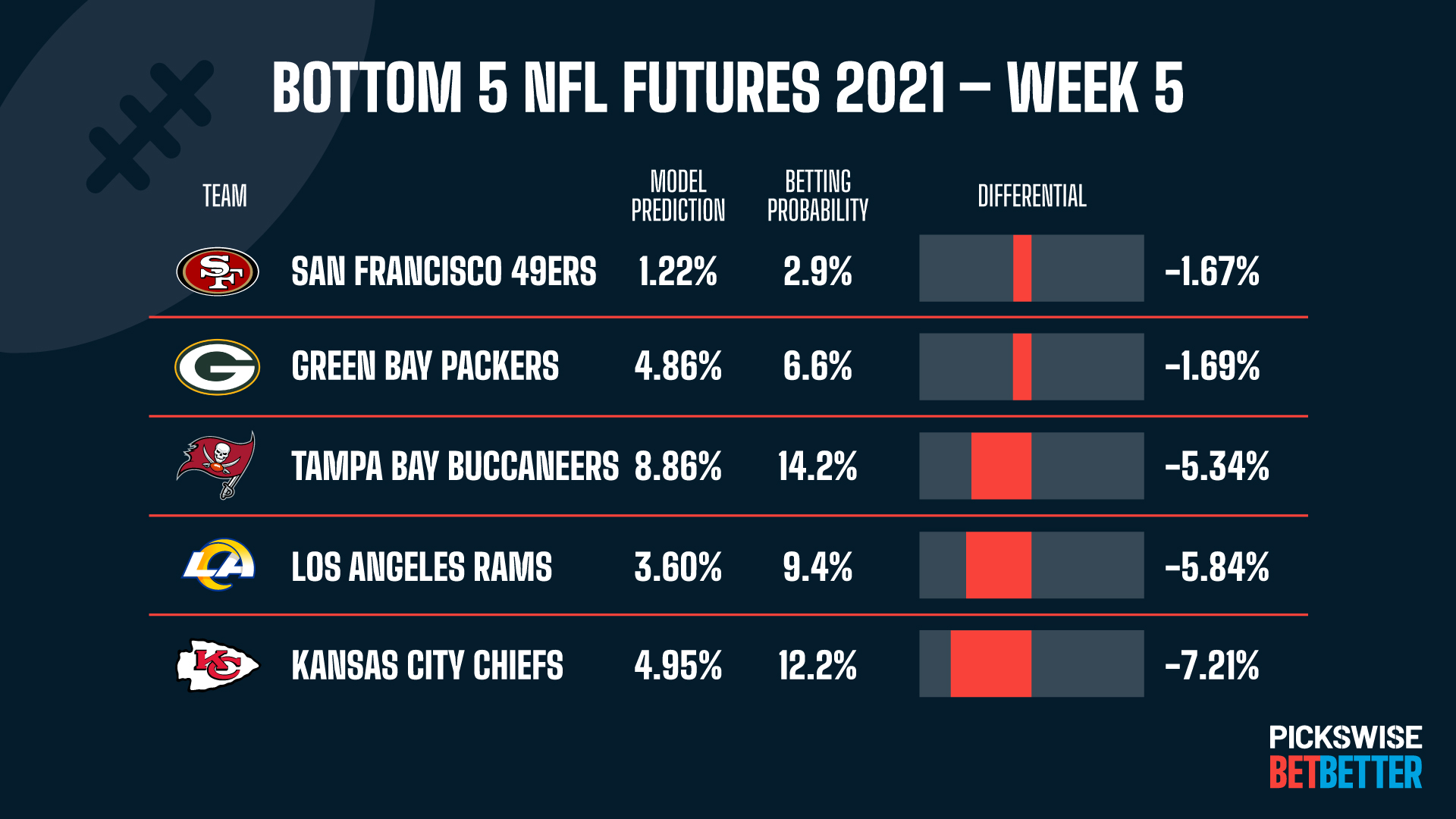 Will the Jaguars even win a game this season? Our model isn’t too sure. Jacksonville’s line on regular-season wins has dropped to 3.5, with the under available at -135 odds. That gives an implied probability that the Jags have a 57.4% chance of finishing the season with three or fewer wins, but our model indicates that there is a 90% chance that Jacksonville goes under 3.5 — a difference of 32.6% compared to the betting odds.

Up next for the Jags is a home game against the Titans, who will be looking to make a statement after their overtime loss to the Jets, before then taking on the struggling Dolphins. If Tennessee is still without AJ Brown and Julio Jones for that game, then you have to like Jacksonville’s chances of winning at least one of their next two games. If they don’t then they really could be in trouble.