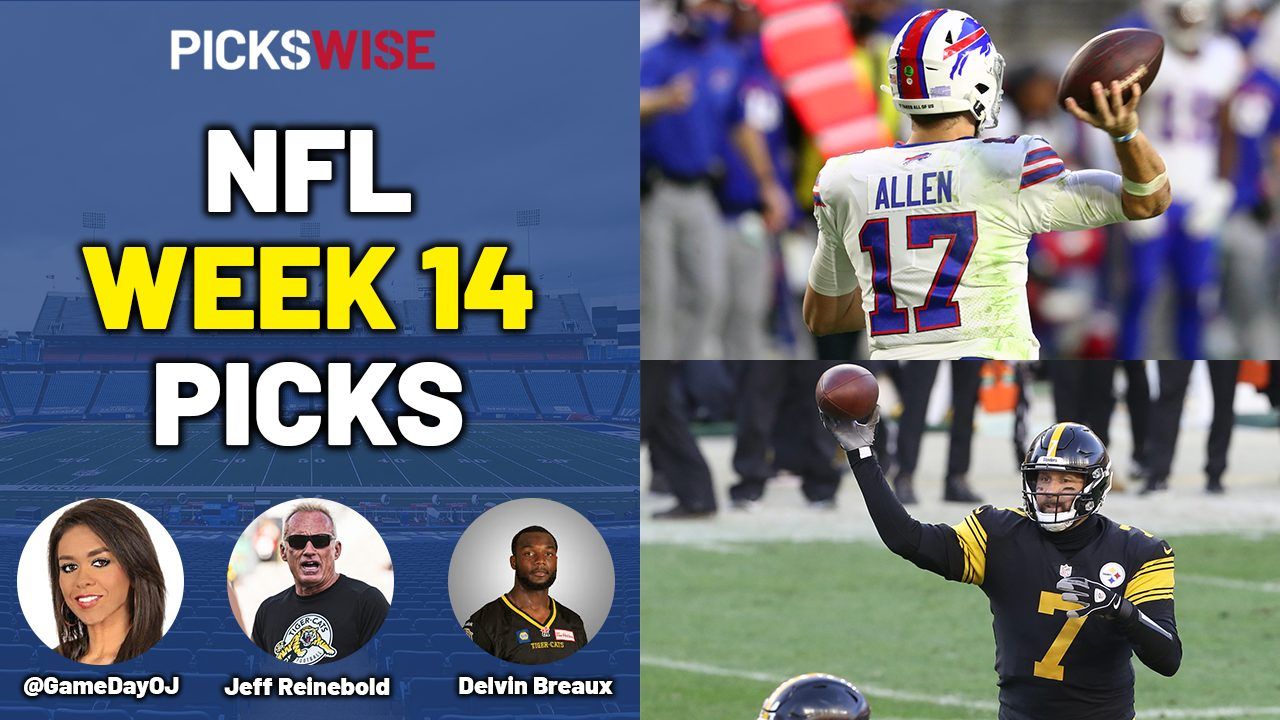 It’s Week 14 of the NFL season and we’re back with another episode of the Pickswise NFL Show! Our NFL betting preview is hosted by Rachael Van Oranje from ESPN975 radio and Jeff Reinebold, a man with over 30 years of coaching experience and a sharp eye for betting picks.

This week, Rachael and Jeff are joined by former New Orleans Saints cornerback Delvin Breaux to discuss their best picks and predictions for all the big NFL games. Breaux was voted the Saints’ defensive MVP by fans in 2015, and currently plays for the Hamilton Tiger-Cats in the CFL.

Week 14 kicks off with a crunch Thursday Night Football clash between the Patriots and Rams in a rematch of Super Bowl LIII. New England came out on top that day, but can Bill Belichick mastermind another victory over Los Angeles?

The standout game of the Sunday early window pits the Kansas City Chiefs against the Miami Dolphins. The Chiefs are 11-1 and have been looking unstoppable on offense, but will come up against a Dolphins defense that has been shutting down everybody lately. Miami would love to boost their postseason potential with a big performance here.

Sunday Night Football will feature two more AFC powerhouses as the Pittsburgh Steelers take on the Buffalo Bills. The Steelers suffered their first defeat of the season last Monday night to Washington, but can Mike Tomlin’s team bounce back? The Bills are also on a roll and this could be a preview of a game we wind up seeing in the playoffs.

Week 14 concludes with an AFC North divisional game as the Cleveland Browns host the Baltimore Ravens. The Browns improved to 9-3 last week with a dominant victory over the Titans, and will look to exact revenge on a Ravens team that embarrassed them in Week 1. Baltimore meanwhile are fighting to stay in the playoff hunt.

Along with the NFL previews for the biggest games, Rachael, Jeff, and Delvin provide us with their Pickswise parlay of the week. They also give their best underdog bets, a team they fancy to upset the odds, and both Rachael and Jeff were on the money last week. Rachael struck with the Lions against the Bears, while Jeff went with the Jaguars +10 against the Vikings. Jeff now has nine winning underdog picks out of 13, but can he reach double digits this week?

As always, you can also read our expert previews for every Week 14 game in the NFL.