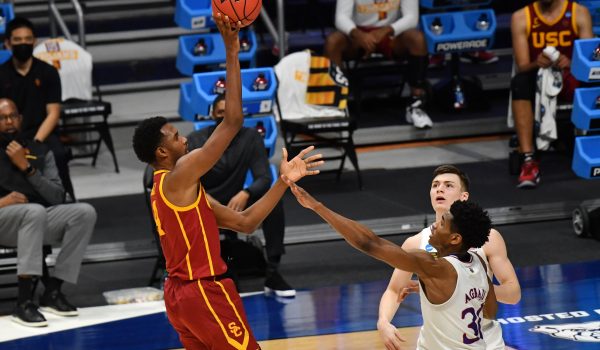 The first weekend of March Madness is in the books, and what a four days it was. The NCAA Tournament action has been incredible so far, and I can’t wait for the Sweet 16 this weekend. Now that the field has been narrowed and individual games will get more attention, this is when the public will truly get introduced to some of these star players.

With that in mind, today I’m going to be breaking down my top five players so far through the first two rounds of March Madness. These are guys you’re going to want to keep an eye on in the Sweet 16, except for one who has already been sent home. Pickswise has a ton of great content coming, so make sure to check out their March Madness hub to stay on top of everything that goes on. Also, be sure to check out their picks on the side and total for every single game in the tournament.

But first, let’s dive into those top five players, in reverse order:

At number five I’ve got the junior and former Auburn transfer Mitchell. He’s a terrific combo guard who does a great job of picking and choosing when to get his own shot, and when he wants to facilitate and get his teammates good looks. He’s a fantastic defender, he’s very tough, and he’s one of the main reasons I believe Baylor will be going to the National Championship game. Through his first two tournament games he’s shooting 11/18 from the field, and 4/9 from beyond the arc. You can’t beat that efficiency combined with his defense.

I mean, c’mon, are we watching this kid? Boeheim has been truly incredible so far. He’s a fantastic shooter, and has a great fundamental base with how he plays the game. He gets to his spots, he doesn’t waste dribbles, and he has terrific range on his jumpshot. Everything you’re looking for from a shooter. His play is what is going to continue to give Syracuse hope that they can keep their run going. If the Orange are going to upset Houston in the Sweet 16, a distinct possibility, it’s going to be on the back of Boeheim.

This kid is what I call a four-level hybrid guard. He’s still the most dangerous player in March Madness. He leads the nation in scoring, but it’s not just that. It’s the way he leads the nation in scoring. He does it efficiently, he has great speed, he also understands how to get to his spots and understands how to get his shot off over bigger defenders. If he continues to play the way he has, I think Oral Roberts has a shot to continue their miracle run and advance to the Elite 8 by knocking off Arkansas in yet another upset.

This kid is as poised of a basketball player that you’ll see in this tournament. The way I’d put it is he’s like a WiFi signal. The closer his teammates are to him, the better they get. That’s how he elevates his guys. He has a magnetism about him, doesn’t press the issue, understands time and situation, and knows how to deliver the ball. He’s also a better athlete than he’s given credit for. Ohio does a great job of putting him in dribble handoffs, and putting him in the post to let him bully smaller guards. Unfortunately Ohio is out of the tournament now, but this isn’t the last you’ll be hearing of Preston. I really love this kid’s chances at the NBA level.

We’ve talked about a lot of guards, but my favorite player of March Madness so far has to be USC big man Evan Mobley. This kid has a terrific motor, and he has a nonchalant greatness about him. He’s a great shot blocker and great interior defender, but that’s not even what makes him most special on defense. If you look at bigs in today’s game, if you can’t defend the ball screen you’re going to struggle at the next level. Mobley has shown that he can play against the ball screens, and can switch onto different styles of offensive players and hold his own. That’s an invaluable skill for a seven-footer to have, and it’s going to help him make it in the NBA.

Want more of Rashad Phillips’ March Madness thoughts, including why he believes there have been so many upsets in the NCAA Tournament so far? Check out the video below!