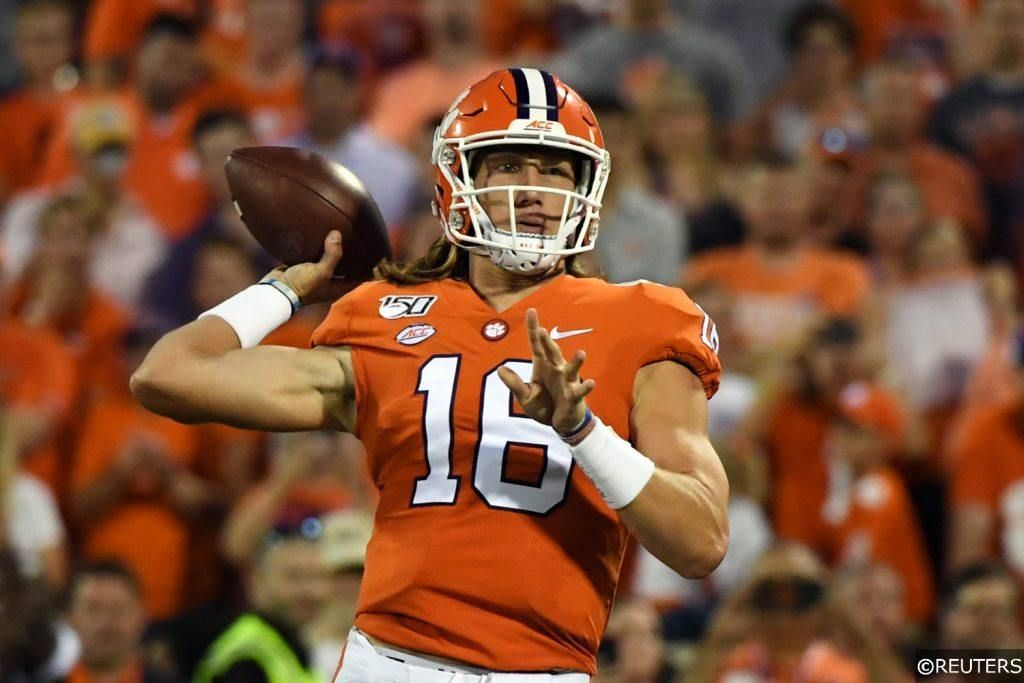 Since graduating from Davidson (The College That Stephen Curry Built), I have been writing about sports--just about any and all you can think of!--and coaching tennis in Atlanta, Ga. Beyond the four major sports, I am an avid tennis fan and cover the ATP Tour on a daily basis. If I'm not busy writing, you can generally find me on a tennis court or traveling the world wherever a sporting event takes me.
@Dimonator133
Updated: 10:21 AM ET December 03, 2019

What’s in store for championship week? Only time will tell, but the table is set for plenty of entertainment from Friday evening (Pac-12 Championship) through Saturday night (Big Ten Championship). Six of this weekend’s 10 college football games feature showdowns between two teams both in the Top 25. Yes, even the ACC Championship enjoys that distinction, as Virginia broke into the AP and coaches’ polls on Monday (and will likely do the same with the College Football Playoff on Tuesday).

Let’s take a quick look at those super six, in order from least intriguing to most (AP rank in parentheses). And you should also take a look at our free college football picks for this week.

The ACC is quite simply a disaster of a football conference. But it is somewhat unfair to lump Clemson into the sum of everyone else’s parts, so let’s leave the Atlantic Division out of it and just talk about the Coastal. Well, the Coastal stinks. Someone had to win it, and that someone was Virginia thanks to last week’s defeat of Virginia Tech. Clemson losing to the Wahoos would create all kinds of CFP chaos, but let’s be honest: that isn’t happening.

To some extent the Big Ten is similar to the SEC in that one division is far superior than the other. The difference is that the SEC East at least has one very good team (Georgia) and the Big Ten West does not have any. Even if Wisconsin pulls off the upset, it is not going to the College Football Playoff. And even if Ohio State loses, it is not getting left out of the College Football Playoff. Zzzzzzzz.

This is a rematch of the exact same game in the exact same place just last weekend, when Memphis took care of business at home with a 34-24 victory over Cincinnati. That gave the Tigers home-field advantage in this one, and if they win again they are headed to the Cotton Bowl as the Group of 5 representative. Should the Bearcats exact revenge, there would be New Year’s Six controversy between them, Boise State, and Appalachian State.

With the second half of this list we get into the meat of College Football Playoff implications. Oregon is out following its second loss of the season to Arizona State, but Utah would get back in the picture with a win and a Georgia loss in the SEC Championship. The 11-1 Utes have won eight in a row since falling to USC 30-23 on Sept. 20. This would have been even bigger—No. 5 vs. No. 6, in fact—if the Ducks had defeated the Sun Devils…. But it’s still big.

This is what the Pac-12 Championship could have been: both teams firmly in contention for a College Football Playoff berth. If Clemson wins (as expected), Georgia loses (as expected), and Utah wins, the fourth and final spot will come down to the Utes and the winner of this Oklahoma-Baylor rematch. The Sooners remained alive by avoiding a second loss when they stormed back from a 28-3 deficit to stun Baylor 34-31 on Nov. 16.

Everyone else needs the Bulldogs to lose, because LSU is a lock for the College Football Playoff no matter the outcome of the SEC Championship. It’s not complicated: if Georgia wins, the SEC gets two teams in the CFP; if LSU wins, the SEC gets one. The Dawgs may be getting more than a touchdown, but don’t count them out. They have played in two of the last three conference title tilts, beating Auburn (2017) and falling to Alabama in a thriller (2018).