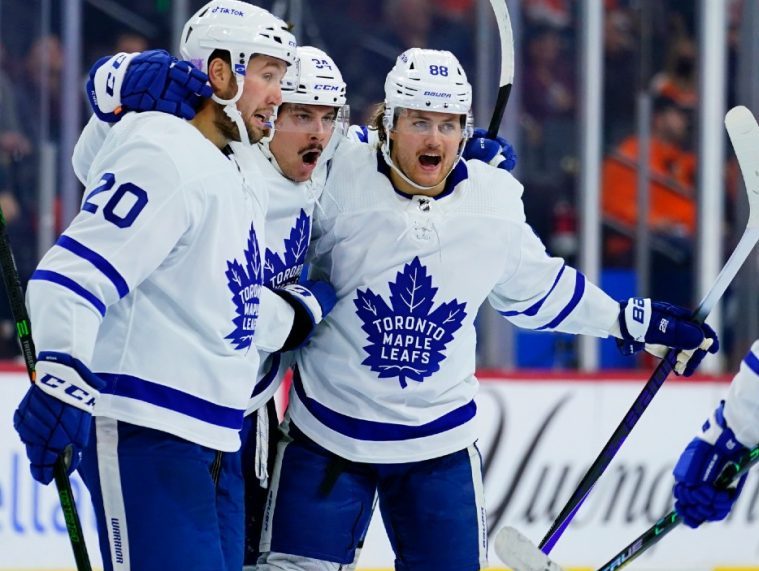 There are six games this evening in the NHL. We’re looking to parlay three of the games for a  parlay that will hopefully pay big. This parlay is just over a 10/1 payout for you. But before we dive in, be sure to check out all of our picks and previews for every game tonight.  You can also follow Pickswise on Twitter for plenty of daily betting content.

The Flyers are underdogs for this game, which is somewhat surprising. Their backup goaltender, Martin Jones, is the confirmed starter so that could partially be an explanation, but he still has some great underlying numbers as a backup this season. He’s posting a 2.67 GAA and .927 SVP through six games with the Flyers. Another explanation for the odds could be that the Flyers are currently on a five game losing streak… However, the Devils are on a two game losing streak, and on paper, Philadelphia is a much better team than NJ. The Flyers five game losing streak shouldn’t reflect too poorly on them, they went up against some of the best teams in the league over the last couple of weeks. Their opponents included the Lightning twice, the Hurricanes, the Bruins, and the Panthers. Most teams in the NHL would struggle through that schedule. With an easier opponent tonight, expect a big bounce back from the Flyers.

The Flyers have the fourth best faceoff percentage in the league. If they can maintain the majority of possession they should be able to dictate play in their favor. They currently have a 2-1-1 record against divisional opponents, this will be a big game for the standings and they’ve fared well in their own division. Despite their losing streak, we think +135 on the money line provides bettors with some great odds.

Be sure to check out our full game preview for the Philadelphia Flyers vs. New Jersey Devils

The Vancouver Canucks are in big trouble this season, and something needs to change if they’re going to have any chance of making the playoffs. Luckily for bettors, we’re going to hopefully take advantage of a broken team today and bet against them on the puck line. The Bruins have been respectably this season with a 10-7-0 record and a 6-3-0 home record, but the Canucks have just been awful. They’re 6-13-2 on the year and have a 3-7-1 record while playing on the road. This should be an easy game for the Bruins tonight. Jaroslav Halak is starting for the Canucks tonight, he’ll be going head to head against his former team in the Bruins. This could really benefit Boston tonight, knowing the goalies’ tendencies and weaknesses could prove to be a huge advantage. Halak is posting a 2.79 GAA and .903 SVP with an 0-3-1 record. The goalie has gone winless all season and the Canucks are currently on a three game losing streak. Vancouver is broken, and until something changes bettors should continue to bet against them. They’ve turned into one of the worst teams in the league and their superstars can barely record any points. Take the Bruins on the puck line tonight.

Be sure to check out our full game preview for the Vancouver Canucks vs. Boston Bruins

After a very slow start to the season, the Leafs have been on an absolute roll winning 13 of 15. They’ve been one of, if not the hottest team in the NHL over the last month and have found themselves on a three game win streak. In their last three games, they’ve covered the spread in each one. They’re finally playing like a team and are starting to live up to the expectations of fans. Jack Campbell is back in the net tonight, the league leader in save percentage and goals against averages will be looking to build on his season totals. He’s currently posting a 1.68 GAA and .943 SVP with three shutouts this season. He’s a favorite to win goaltender of the year and through 22 games he’s been the Leafs MVP. Defensively, Toronto has been incredible this season. They’ve allowed just 2.18 goals per game, the third fewest in the league, and have allowed the eighth fewest shots per game with 30. If they can have a strong defensive game tonight, they should walk away with a win and cover the spread.

Toronto’s special teams have separated them from the rest of the pack this season. They’ve been consistently good on both fronts, the powerplay is sixth best in the NHL with a 24.6% success rate and their penalty kill is the seventh best with an 86.4 success rate. In their last three games, they’ve outscored their opponents 13-3. Take the Leafs on the puck line here, they’ve been playing incredibly well as of late.