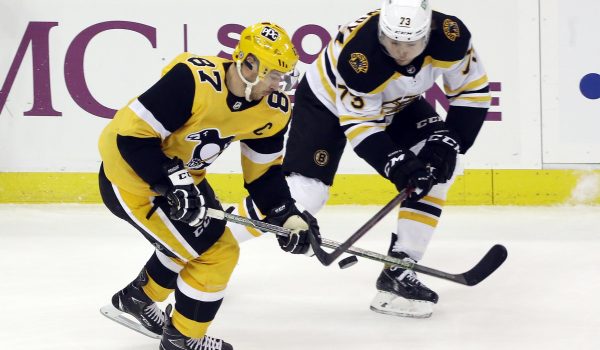 We’ve got eight games on deck for Tuesday in the NHL, and we’ve got a four-leg parlay at over a 17/1 payout to go with it. All eight teams in the East Division are in action on Tuesday night with important points up for grabs.

Before I reveal this mega parlay, don’t forget to check out our picks for the side and total on every NHL game first. We’ve been on a roll this hockey season, so don’t miss out on their picks for all eight of today’s games.

The Pittsburgh Penguins picked up a big win on Sunday against the Boston Bruins to extend their winning streak to four games and earn sole possession of first place in the East Division. Tristan Jarry recorded 29 saves in the game and earned his first shutout of the season. Jarry has now won four straight games and earned a point in 11 out of his last 12 starts. Sidney Crosby picked up an assist on Sunday and has ensured that he’ll finish with yet another season averaging at least one point per game.

The Bruins dropped their second straight game on Sunday which reduced their lead over the New York Rangers to just four points. Boston is struggling to get any offense production out of their bottom six which has resulted in a new look for their third and fourth line. Head coach Bruce Cassidy hopes that this will help Charlie Coyle, who hasn’t scored since February 28, find a spark. The Penguins will be a tough team to experiment against and have been solid on their home ice this season, posting a record of 20-3-2.

Be sure to also check out our full-game preview for Boston Bruins vs. Pittsburgh Penguins.

The New York Rangers are running out of time trying to catch the Boston Bruins for the final playoff spot in the East but it is not for a lack of effort. On Sunday they beat the Buffalo Sabres 6-3 and will play them in their final meeting on Tuesday night. The Rangers have won six of their last eight games with all six of those wins by more than one goal. In the Rangers’ last eight games they are averaging 3.88 goals with a 35 percent powerplay rating, and Igor Shesterkin has been shutting the door in net with his 2.47 goals-against average and .919 save percentage.

Buffalo has lost three of their last four games with an average of only 2.5 goals during that stretch. Rasmus Dahlin has had a year to forget as he is last in the NHL with a -34 rating and only 23 points. The Rangers have won five of the seven games between these two this year. New York knows it is going to be tough to get into the playoffs but if they want any chance they need to beat the Sabres.

Be sure to also check out our full-game preview for Buffalo Sabres vs. New York Rangers.

The Washington Capitals have owned the season series against the Islanders so far, winning five of the first seven meetings. They won the most recent meeting in dominating fashion, 6-3. The Capitals are currently sitting second in the NHL, averaging 3.48 goals per game. They also have one of the league’s best powerplays with Alex Ovechkin on it. Ovechkin can be a very streaky goal scorer, and he is currently on one of his runs. He has five goals in his last eight games. The Capitals will be looking to build off of their victory last game and should come out on top.

Playing the Capitals three games in a row is no easy task. The New York Islanders are one of the league’s best defensive teams, but at times, their lack of offensive production can catch up to them. They will have to play a near-perfect defensive game because I do not believe they have the offensive firepower to keep pace with the Capitals. There is extra motivation on both sides in this game, as the two teams are separated by just three points in the standings.

The New Jersey Devils will host the Philadelphia Flyers for their fifth meeting of the season. This is the second of four games in a row between these teams. The Devils have been on a slide over the last month, they’re now only two points ahead of the last-place team in the league. They’ve been one of the coldest teams in the NHL as of late. They’re 0-9-1 in their last 10 games, allowing 4.1 goals per game during that stretch. The Devils have plummeted hard and are now looking at a possible first overall pick after losing 10 games in a row. At this point, New Jersey might be embracing the chance at a first overall pick.

Be sure to also check out our full-game preview for Philadelphia Flyers vs. New Jersey Devils.