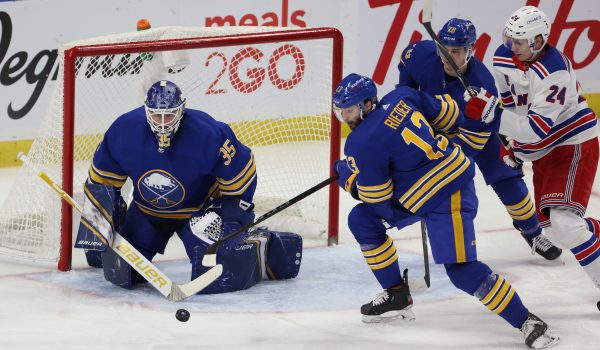 We’ve got ten games on deck for Tuesday in the NHL, and we’ve got a four-leg parlay at over a 19/1 payout to go with it. It’s a busy night in the East Division as all eight teams will be in action.

Before I reveal this mega parlay, don’t forget to check out our picks for the side and total on every NHL game first. We’ve been on a roll this hockey season, and our experts are on fire right now. Don’t miss out on their picks for all ten of today’s games.

For this play, we’ve got two underdogs on the money line, one favorite and one on the puck line. Let’s break each of them down.

The Buffalo Sabres are on a four-game point streak after grabbing three out of four possible points in their series against the New York Rangers. Goaltender Linus Ullmark has been terrific for the Sabres, going 2-1-2 in his last five starts. Their offense has also gained confidence after forcing overtime in both games against the Rangers with goals in the last four minutes of each game. This is not the same Sabres team that we saw lose 18 games in a row, they’ll be confident as they take on a team that’s only one spot ahead of them in the division standings.

The New Jersey Devils were swept by the Washington Capitals over the weekend and have now lost five out of their last six games. Kyle Palmieri was held out of Sunday’s game in anticipation of a trade in the coming days which means he’ll almost certainly miss Tuesday’s game against the Sabres as well. Palmieri is a huge part of the Devils offense and will be a huge loss in this one.

Be sure to also check out our full-game preview for Buffalo Sabres vs. New Jersey Devils.

The Pittsburgh Penguins had their five-game winning streak snapped on Saturday in a 7-5 loss to the Boston Bruins. The Penguins hold the third-place spot in the East Division and are only four points behind the Washington Capitals who sit in first place. They are set to begin their last series against the New York Rangers this season, who they’ve beat in five out of their six matchups.

The Rangers were starting to make a serious push for the last playoff spot in the East Division and had a great opportunity to close the gap with a series against the Buffalo Sabres. Instead, they split the series due to their inability to close out games which has been a problem for them all season. Zibanejad hasn’t scored a goal in regulation against a team other than the Flyers since March 20 and is a huge part of their struggles on the first line. Pittsburgh should have no problem against a very inconsistent New York team.

Be sure to also check out our full-game preview for Pittsburgh Penguins vs. New York Rangers.

The Bruins are 9-5-3 on the road and have won two of their last four games. Boston is holding down the fourth and final playoff spot in the East Division and is having a consistent season so far with a 2.74 goals for average and 2.47 goals-against average. With Tuukka Rask out for a few more games, Daniel Vladar got the start on Monday and Jaroslav Halak will get the start on Tuesday with his .910 save percentage as these two backups hold down the fort while Rask gets ready for a long playoff run.

The Flyers are not in a good place and have not been for almost a month now. This puts them outside a playoff spot and chasing a team like Boston. The Flyers are 4-4-2 in their last 10 games and have lost two of their last three. The struggle is real for players like Jakub Voracek, who has no goals in his last eight, and Travis Konecny, who has one goal in his last 13 games.

Be sure to also check out our full-game preview for Boston Bruins vs. Philadelphia Flyers.

The Tampa Bay Lightning are coming off one of their most disappointing losses of the year, losing 5-1 to the Detroit Red Wings – who are last in the Central Division. They will be looking for redemption against the Columbus Blue Jackets on Tuesday night. Tampa Bay has won two of its last three and is 11-6-2 on the road. As a team, the Lightning are averaging 3.39 goals for per game and have a 20.2 power-play percentage which is one of the best in the league. Their leader on the PP is Victor Hedman who has 20 power-play points this year and leads all NHL defensemen with 35 points on the year.

The Blue Jackets are 3-6-1 in their last 10 and have lost three in a row. In their last eight games, their powerplay is at 8.1 percent, which is a far different look than TB. They do not play a well-structured defensive game with a lot of neutral-zone turnovers, which cause their shots against to be at 33.8 per game over their last eight.

Be sure to also check out our full-game preview for Tampa Bay Lightning vs. Columbus Blue Jackets.