Tuesday NHL three-team mega parlay (+1020 odds): Flyers look to get back on track 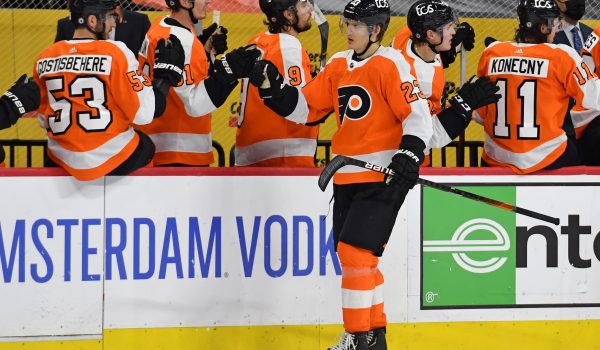 We’ve got five games on deck for Tuesday in the NHL, and we’ve got a three-leg parlay at over a 10/1 payout to go with it.

For this play, we’ve got one favorite on the money line and two on the puck line. Let’s break each of them down.

The Philadelphia Flyers dropped their second straight game on Monday night against the New York Islanders. This was, however, the best game that Philadelphia has played in weeks as they were able to pick up a point to put themselves just two points out of a playoff spot. Philadelphia completely controlled the game, outshooting New York 37-20. Oskar Lindblom is starting to return to his old form, scoring three goals in the last three games. They have a great opportunity to grab two points on Tuesday night as they welcome the New Jersey Devils who they’ve beat in both matchups this season. New Jersey is ahead of only the Buffalo Sabres in the division standings and don’t have much to play for this season. The Devils are struggling as they’ve only won five games in their last 18. The Flyers are the better team and will be looking to build off of their much-improved performance on Monday night.

Be sure to also check out our full-game preview for New Jersey Devils vs. Philadelphia Flyers.

This will be the fifth meeting between these teams this season. The Florida Panthers have dominated the series and they are 4-0 against the Chicago Blackhawks this season. In three of the four games they have managed to cover the puck-line spread. The Panthers are second in the Central Division, and for a good reason. They are an offensive powerhouse, led by Aleksander Barkov and Jonathan Huberdeau. Those players have 37 and 35 points respectively. That has led them to being the third-highest scoring team in the NHL, averaging 3.35 goals per game. As for goaltending, Sergei Bobrovsky seems to have found his game. He has a 12-4-2 record in 18 starts. The Blackhawks have slowly began cooling off. In their last seven games they are 1-6. That includes the current four-game skid. Patrick Kane and Alex DeBrincat will only be able to take this team so far. Outside of those two players, their team does not generate much offense.

Be sure to also check out our full-game preview for Florida Panthers vs. Chicago Blackhawks.

In three meetings this season, the Tampa Bay Lightning have beaten the Dallas Stars every time, including two shutouts. One of the biggest surprises of the year is how the Stars have struggled out of the gate. They are only 10-10-8 this season with a brutal home record of 6-4-6. The Lightning are 10-4-2 on the road and Andrei Vasilevskiy has been playing out of his mind, winning 11 in a row. In 24 games this season he’s only lost four times, and he is posting a 1.88 GAA and .933 SVP. Offensively, Tampa Bay probably has one of, if not the strongest attack in the NHL. The Lightning are scoring 3.68 goals per game, the most in the entire league, and they have four players hovering around at a point per game or better. Their powerplay is ranked second in the league by scoring 28.6 percent of the time and they have scored four power-play goals in their three games against the Stars.

Be sure to also check out our full-game preview for Tampa Bay Lightning vs. Dallas Stars.