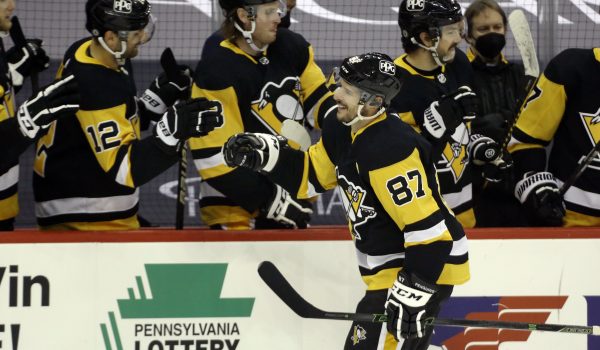 We’ve got five games on deck for Friday in the NHL, and we’ve got our favorite pick from each game for a five-leg parlay at over a 19/1 payout to go with it.

For this play, we’ve got two favorites on the money line, two on the puck line and an under on a game total. Let’s break each of them down.

Following their loss to the Ottawa Senators on Monday, the Calgary Flames should be looking to bounce back. Ottawa has three injured goaltenders right now, so Flip Gustavsson is expected to get his third ever NHL start for this one which should play into the Flames favor. His lack of experience in the NHL could lead to a lot of positive things for the Flames. The Senators are ranked third worst in the league when it comes to defending shots on goal, which should seriously help Calgary in this case. In their last ten games, the Senators are only averaging 2.2 goals per game, while the Flames have averaged 2.9 during that stretch. Additionally, Ottawa has been allowing 3.7 goals in their last ten, while Calgary has been able to hold their opponents to 2.8 goals per game. Offensively, the Flames have more experienced players like Elias Lindholm and Matthew Tkachuk leading the way for their team, while the Senators are built on an extremely young core.

Be sure to also check out our full-game preview for Calgary Flames vs. Ottawa Senators.

The Wild have owned the season series against the Anaheim Ducks, they are 4-1 against them in five meetings. They have covered the puck line in two of their four wins against them. They Wild are averaging 2.97 goals for per game, good for 15th best in the NHL, and they are averaging 2.53 goals against per game, good for eighth best in the league. A large part of the good defensive numbers has been the play of goaltender Kaapo Kahkonen. Through 17 games started, he has a 12-5-0 record, with a 2.29 GAA and a .921 SVP. The Ducks are in the middle of a poor stretch of hockey. They are 1-6 in their last seven games. They have been plagued by their poor defensive game all season. They are allowing the fifth most goals against so far this season, averaging 3.33 per game. Their goaltender, John Gibson, has completely fallen off the rails as of late. His record is now 6-12-5, with a 3.11 GAA and a .894 SVP.

Be sure to also check out our full-game preview for Anaheim Ducks vs. Minnesota Wild.

The Pittsburgh Penguins are coming off of a tough three game series against the New Jersey Devils. This ended a brutal stretch where they played five games in seven days. The Penguins got a much-needed break with two consecutive days off and will return to the ice with a matchup against the worst team in the league, the Buffalo Sabres. Despite suffering injuries to Evgeni Malkin and Brandon Tanev, the Penguins still rank in the top third of the league in average goals for with 3.10 per game. The Sabres matched their longest losing streak in franchise history on Monday night with their fourteenth straight loss. They also lost goaltender Carter Hutton to injury and had to call on Dustin Tokarski, who was playing in his first NHL game since 2016, to fill the void. The Penguins have beat the Sabres by three goals in each of their previous matchups this season and should have no problem doing that again coming off of a two-day break.

Be sure to also check out our full-game preview for Buffalo Sabres vs. Pittsburgh Penguins.

In the last 23 meetings between these two clubs, the over has only cashed on four occasions. Look for a similar result to what we saw on Monday night, as both teams did a good job to limit high-danger scoring chances. This is particularly true for the Kings of late, as they have gone under the total in five of their last six games. Both teams rank in the bottom half in the league in goals scored and shots on goal. There has also been a trend towards lower scoring games this year since teams are now playing each other so often and becoming more familiar of their opponent’s offensive threats. Cal Petersen has been fantastic for the Kings this year and his 2.45 GAA and .926 SVP should play a big part of keeping this game under the total.

Be sure to also check out our full-game preview for Los Angeles Kings vs. San Jose Sharks.

On Monday night the Jets beat the Canucks 4-0 behind a shutout by Connor Hellebuyck and two goals from Adam Lowry. The Jets are now 9-6-1 on the road and have the fifth leading point producer in the NHL in Mark Scheifele. The Jets depth is what scares most of the teams in the North division which includes Kyle Connor who has five points in his last five games and captain Blake Wheeler who has scored two goals in his last four games while showing some grit in the defensive zone. The Canucks have the second highest shots against total of 33.7 per game which is a reason their goals against average is over 3 a game. Quinn Hughes has been great offensively in this his second season in the NHL but defensively his mistakes are piling up as he is minus 17 on the year and becoming a liability in his own zone. This will be the Canucks fourth game in six nights and the Jets will take advantage to win the game.

Be sure to also check out our full-game preview for Winnipeg Jets vs. Vancouver Canucks.