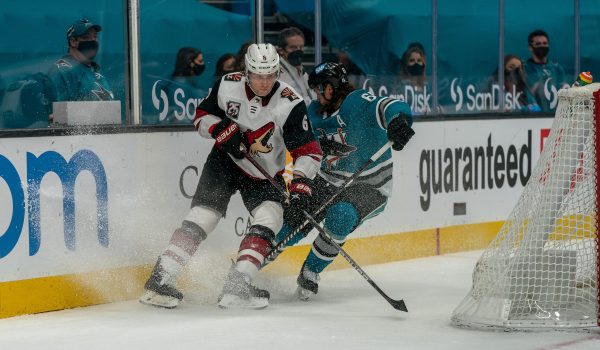 We’ve got seven games on deck for Wednesday in the NHL, and we’ve got a four-leg parlay at over a 14/1 payout to go with it. It’s a big night in the West Division as all eight teams are in action.

For this play, we’ve got two favorites on the money line, one on the puck line, and a game total pick. Let’s break each of them down.

The Toronto Maple Leafs have now taken a stranglehold on the top spot in the North Division and it looks as though they will play the Montreal Canadiens in the first round. Toronto has won two in a row as they sit seventh in the NHL in goals for average with 3.29 and have one of the best road records at 16-6-2 on the year. The Maple Leafs are strong down the middle of the ice and John Tavares has picked up his game of late with eight points in his last five games. Jack Campbell will get the start and try to continue his winning ways with his 13-2-1 record and .922 save percentage. The Leafs have won four of the six head-to-head matchups with the Canadiens this year.

Montreal has lost four of their last six games and all four of those losses have been by more than one goal. The Canadiens are without Carey Price, Jonathan Drouin, and Brendan Gallagher, and this will be their fourth game in six nights. As a team they have only averaged 1.83 goals over their last six games.

Be sure to also check out our full-game preview for Toronto Maple Leafs vs. Montreal Canadiens.

Hellebuyck has lost his last four starts for the Jets with a .833 save percentage and 5.34 GAA and one of his top defensemen is Josh Morrissey, who is -9 in his last five games. The Jets did not handle the Oilers’ offense on Monday and they probably won’t be able to again on Wednesday. Connor McDavid has 81 points on the year and he had four points including a hat trick vs the Jets in the last game.

McDavid now has 12 points in his last four games and is heating up at the right time. Linemate Leon Draisaitl is having an unbelievable year with 66 points–including five in his last four games. Those two have helped the Oilers go over the total number in their last two games and five of the eight games against the Jets have gone over as well. The Oilers’ powerplay is clicking at 23.8 percent over their last seven games and the slower Jets defensemen will be forced to take penalties against the skilled Oilers’ players.

Be sure to also check out our full-game preview for Edmonton Oilers vs. Winnipeg Jets.

The Los Angeles Kings were able to get back in the win column on Monday night with a 4-1 win over the Anaheim Ducks. The Kings still have a very small chance of making the playoffs and must pick up points against the worst team in the West Division if they want to keep things interesting. It’ll likely be Cal Peterson in the crease for the Kings who has been a bright spot for Los Angeles this season. Peterson is only allowing an average of 2.74 goals per game with a .917 save percentage and should have no trouble against Anaheim’s lackluster offense.

The Ducks were handed their fifth straight loss on Monday and have now only won three out of their last 11 road games. The Ducks have nothing to play for the rest of the season while the Kings will be motivated to pick up points as they have three straight games against the worst team in the division. Los Angeles has won the last three meetings between these teams by a combined score of 13-3 so they should have no trouble in this one.

Be sure to also check out our full-game preview for Anaheim Ducks vs. Los Angeles Kings.

The Arizona Coyotes are 3-1-1 against the San Jose Sharks in their five previous meetings this season. If the Coyotes want to stay in the playoff race in the West Division, this game is a must-win. The Coyotes are one point back of the St. Louis Blues for the fourth and final playoff spot. The Coyotes don’t have any offensive superstars on their team, but they have a solid group of players that can attack in waves and cause problems for their opponents defensively. They are also solid defensively and should be able to shut down the limited offensive threat that the San Jose Sharks pose.

The Sharks have been plagued by their poor defensive play all season long. They are currently allowing the fifth most goals against per game in the NHL, with 3.42. It doesn’t help that they will have a rookie goaltender in net, who has a 3.27 GAA and a .882 SVP. This isn’t good enough for a team that gives up plenty of scoring chances.

Be sure to also check out our full-game preview for Arizona Coyotes vs. San Jose Sharks.