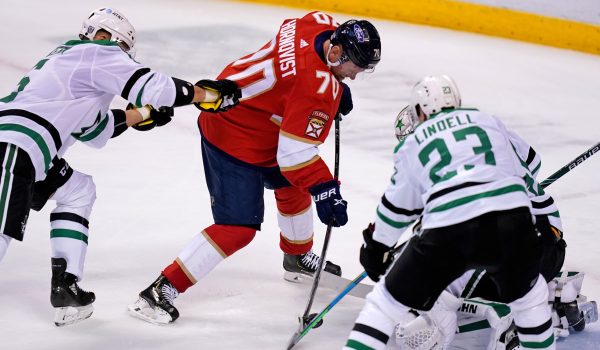 There’s a seven-game slate in the NHL on Wednesday, including back-to-back nationally televised games on NBCSN. The Rangers visit the Flyers at 7:00 p.m ET to get things started on NBCSN as Philadelphia seeks revenge for last week’s shootout loss to the Rangers.

Kick off Wednesday’s slate with our three-team parlay at nearly 8/1 odds. Make sure you also check out our picks on the side and total for all of tonight’s matchups so you’re as informed as possible before making your bets.

Here’s our three-team parlay for Wednesday:

For this play, we’ve got a mix of two outright winners and one favorite on the puck line. Let’s break each of them down.

The Florida Panthers have the highest points percentage in the NHL. They are one of the top teams this season, winning four of their last five games. The Panthers are 6-2-1 at home and have the fifth-highest goals for per game average at 3.41. Jonathan Huberdeau is showing why he is an elite player in the NHL leading the Panthers in points and recording eight points in his last five games. Florida is always pushing the puck up the ice and they spend the majority of the game in the offensive zone. They currently sit second in shots per game at 33.5 and will look to exploit a Stars team that they dominated on Monday night, winning 3-1. Losing eight of their last nine has the Stars on a downward spiral that will continue again against this high-powered Panthers team.

Be sure to also check out our full-game preview for Dallas Stars vs. Florida Panthers.

The Philadelphia Flyers will be looking for some revenge against the New York Rangers on Wednesday night. Last week the Flyers lost in the shootout with a final score of 3-2 against NYR. Despite their loss, Carter Hart had a fantastic night in the crease. He posted a .939 SVP and 1.90 GAA, some of his best numbers of the season. Philly also has the sixth-best goals per game, currently averaging 3.4. Additionally, the Flyers are scoring on 14.6% of their shots, the best in the entire league. The list of injuries for this game is a long one, but the most notable player expected to be absent is Rangers’ forward Artemi Panarin. Without him, the Rangers lack any identity. They’ve struggled to score goals; they have the sixth-worst average in the league only scoring 2.44 a game. Without him, the team is bound to struggle.

Be sure to also check out our full-game preview for New York Rangers vs. Philadelphia Flyers.

The Colorado Avalanche just finished up a four-game series against the Vegas Golden Knights, which they split 2-2. Those are easily two of the best teams in the NHL. Captain Gabriel Landeskog returned to the lineup on Saturday. He provides a big physical and offensive boost. Colorado’s defensive core is solid in their own end, helping lead them to the second-best goals-against average in the NHL with 2.13 per game. Not only are they strong in their own end, but they also have the likes of Cale Makar who can be considered an extra forward when in the offensive zone. Their defense is backed by a goaltender is in the early talks for the Vezina Trophy, as Philipp Grubauer has a 9-4-0 record with a 1.78 GAA and .932 SVP. The Wild have played the Avalanche three times already this season, losing two of them.

Be sure to also check out our full-game preview for Minnesota Wild vs. Colorado Avalanche.