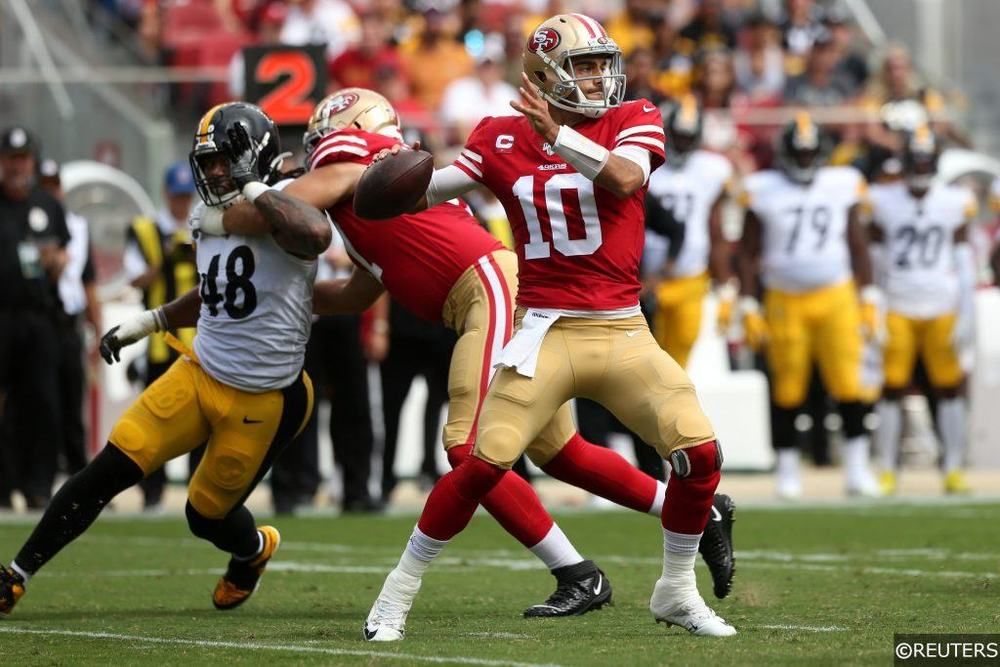 I'm an NFL handicapper here at Pickswise who was raised in a household full of sports fanatics. Since I unfortunately never had LeBron James' jumping ability I wasn't able to make it to the NBA, and chose writing about sports as the next best thing. An avid sports bettor myself, I'm excited to get to write about the industry as it gets set to take off across the country. Buckle up.
Published: 14:44 PM ET November 06, 2019

The first nine weeks of the 2019 NFL season are officially in the books. Things are beginning to take shape, and we’ve got a good idea of who the contenders and pretenders are. Accordingly, the Pickswise team has come up with their post-Week 9 NFL power rankings as we head into Week 10. There are a lot of interesting games in Week 10 so make sure to check our NFL Picks as well. Let’s check out below who went up and down the new NFL Power Rankings!

The Patriots lost a tough road game to the Ravens, but I’m not ready to knock them down this list. If they lose to the Eagles coming off the bye in two weeks though, then they’ll start to tumble.

The Saints were on a bye, but move up because of the Packers’ ineptitude. What should be a cakewalk against the Falcons awaits them in Week 10.

The 49ers are still undefeated, but something still bugs me about them. This past week, they only beat the Cardinals by three points. An important test against Seattle awaits.

The Chiefs picked up a much-needed win over the Vikings with Matt Moore under center. Now, it looks like they’ll be getting Patrick Mahomes back this week. The sky is the limit.

The Ravens became the first team to beat New England, and Lamar Jackson might just be the MVP frontrunner. Buckle up.

The Packers got smoked by the Chargers over the weekend, and Aaron Rodgers aptly said they got served a slice of ‘humble pie’. Hopefully, the reality check benefits them in the long run.

The Vikings dropped a game they really needed to take advantage of against Moore. Kirk Cousins continues searching for that defining big win with Minnesota.

Another week, another close Seahawks win that they arguably should’ve lost. Seattle continues to narrowly escape games, and that isn’t sustainable.

Are the Eagles back? They’ve now picked up back to back wins and are starting to get a lot healthier on defense. The Desean Jackson loss hurts, but I think they’ve got a chance to knock off New England after the bye.

The Rams are coming off the bye preparing to face the Steelers. Sean McVay with an extra week to prepare is a scary thought.

The Colts lost narrowly to the Steelers because of a last-second shanked Adam Vinatieri field-goal attempt, but they didn’t deserve to lose that game. They were playing without Jacoby Brissett for most of the game. A get-right spot against Miami awaits.

The Texans steamrolled the Jaguars in London, but they didn’t play as well as the final score there indicates. The secondary still is full of question marks, and Deshaun Watson can’t do it all by himself….

Dallas pummeled the Giants on Monday Night Football, but I’m not drawing too many conclusions from that easy matchup.

Kyle Allen bounced back well from his worst start as a pro, and led the Panthers to an easy win over the Titans. With Cam Newton going on injured reserve, it’s his team moving forward.

The Bills beat the Redskins, which isn’t deserving of too much praise. Buffalo continues to feel overrated.

The Chargers picked up a huge win over the Packers, and are starting to turn a corner. I’ve been saying for a while not to sleep on this team.

The Raiders beat the Lions on Sunday, and continue to be better than expected. A pivotal AFC West game against the Chargers is coming up on Thursday Night Football.

The Cardinals lost to the 49ers on Thursday Night Football, but they showed an impressive amount of fight. They only lost by three points, and they have still won three of their past five games.

The Lions are starting to fall apart. They lost to Oakland this past Sunday, and players are beginning to openly question the coaching staff. That’s never a good sign.

The Jaguars lost in London, and soon after announced they were going back to Nick Foles under Center. Alas, Minshew Mania is over.

After back-to-back lucky wins, the Titans finally got exposed by the Panthers. Ryan Tannehill isn’t the long-term answer, and Tennessee isn’t going anywhere this season.

The Steelers have won three straight games, but I’m not buying it. Their last two were against the Dolphins and a backup quarterback in Brian Hoyer, and I think they’ll get exposed soon.

The Bears further humiliated themselves this past Sunday, gaining only 164 yards of total offense against the Eagles. They’ve got one last chance to save their season this week against the Lions.

The Browns managed to sink even lower this past week, losing to Brandon Allen and the Broncos in his first career start.

Tampa Bay suffered another heartbreaking loss to the Seahawks. It was another game they arguably deserved to win, and this squad is a lot better than their record indicates.

Broncos picked up a neat win over the Browns, but I’m not hopping on the Brandon Allen bandwagon just yet. Denver is still just playing out the string.

The Giants might have the worst defense in the league at this point, and they aren’t giving Daniel Jones much of a chance.

Dan Quinn somehow still has a job, but he might not if the Falcons get pummeled by the Saints in Week 10.

The Dolphins have been surprisingly competitive over the past month, and they just picked up their first win of the season over the Jets. The tank is no longer perfect.

Sam Darnold continues to get worse every week, and the Jets just got completely embarrassed by the Dolphins. Adam Gase could be running out of time in the Big Apple.

Dwayne Haskins got the first start of his career, and it unsurprisingly did not go well. Washington continues to be a dumpster fire.

The Bengals are now in a clear first place in the race for the first overall pick. At least they’ve got that going for them.