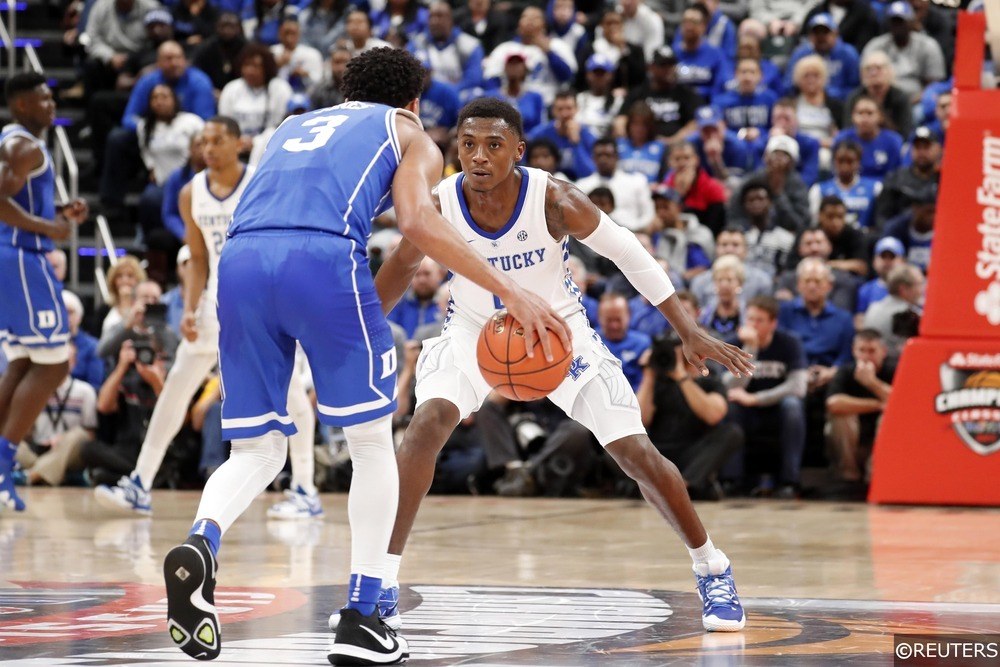 As we enter the first week of 2020, teams throughout the country open up conference play and there are plenty of intriguing match-ups ahead. Gonzaga has flexed their muscles and has a tight hold on the top spot in the AP Poll. How long can they hold the top spot? Others are right on their heels, but the first week of 2020 will be telling for all the teams that feel like contenders come March. Pickswise takes a look at the most important player for each of the College Basketball Power 16 teams.

The Bulldogs have continued to build momentum and following a blowout of Detroit-Mercy, Killian Tillie remains the key player that keeps the Bulldogs who they are. Tillie must remain healthy if this team wants to be a contender in the NCAA Tournament. Next Games: @ Portland (Thurs. 1/2), vs. Pepperdine (Sat. 1/4).

Like Gonzaga, Duke must get its leader back and healthy. Tre Jones has missed the last two games with a mild foot sprain. The Blue Devils will need him back plus a third scoring option to consistently be available if they want to reach the Final Four in March. Jones led Duke to a convincing win at Michigan State earlier this season, they need him for the tough road ahead. Next Games: vs. Boston College (Today), @ Miami-FL (Sat. 1/4).

The Bears have had a strong start to the season, but if they want to reach their true ceiling Tristan Clark must stay healthy. He has yet to return to the form he was at when he suffered a knee injury last January. He is only averaging five points per game. If the Bears are a true contender their best players must contribute. Next Games: vs. Texas (Sat. 1/4).

The Jayhawks remain among the top contenders nationally, even with a couple of tough losses against Duke and Villanova. Devon Dotson has settled down since troubles with turnovers to start the season, but with no other point guard on the roster, he has a lot of pressure to succeed. Dotson paired with Udoka Azubuike inside has Kansas in a good position for March. Next Game: vs. West Virginia (Sat. 1/4).

The Ducks have really rattled off strong wins and guard Payton Pritchard has thrived all season for Oregon. The emergence of freshman CJ Walker has the Ducks ready to pounce. Next Games: @ Colorado (Thurs. 1/2), @ Utah (Sat. 1/4).

Auburn doesn’t have a marquee win yet, but that hasn’t stopped the Tigers from remaining unbeaten so far.  With four players averaging in double figures Samir Doughty stands out averaging 16.4 points per game. They likely won’t face a major opponent until they play Kentucky in February. Yet anything can happen in the SEC. Next Game: @ Mississippi State (Sat. 1/4).

If the Aztecs can get past Utah State this weekend, they will likely be favored in every remaining game after that. San Diego State’s unbeaten start has been led by guard Malachi Flynn who has been the key leader the Aztecs have needed. The key in March will be the leadership of a guard, and San Diego State has one of the best in the country. Next Games: vs. Fresno State (Wed. 1/1), @ Utah State (Sat. 1/4).

The Buckeyes stumble after dopping a neutral site game against the West Virginia Mountaineers in Cleveland. Ohio State has now lost two of its last four games, but still hold wins over Kentucky, Villanova, North Carolina, Penn State, and Cincinnati. Kyle Young could be out for a certain amount of time due to appendicitis. Young has been a key cog due to his energy and crashing the glass. Next Game: vs. Wisconsin (Fri. 1/3).

The Bulldogs face an ultimate test on this New Year’s eve as they visit St. John’s to open Big East play. Can Kamar Baldwin return to the level the Bulldogs need? The Big East has had a history of self-destruction, could this be the case for Butler? Next Games: @ St. John’s (Today), vs. Creighton (Sat. 1/4).

The Tigers loom to have found a way to live without James Wiseman. Memphis was able to kick off AAC play with a win over Tulane to start the week. Turnovers have been the one major problem for the Tigers. The return of freshman Lester Quinones should help cut down on some of those problems. Next Game: vs. Georgia (Sat. 1/4).

The Mountaineers picked up a major victory over the weekend, as they took down the Ohio State Buckeyes on Sunday. Big man Oscar Tshiebwe has been a huge contributor for the Mountaineers, but the biggest shocker was that he was held to just eight minutes against the Buckeyes due to foul trouble. Freshman Miles McBride pitched in 21 points of the bench in the win. West Virginia gets the ultimate test ahead on the schedule. Next Game: @ Kansas (Sat. 1/4).

The Cardinals drop big time after losing the battle of Kentucky against the Wildcats in overtime. Their record is kind of lacking other than their home blowout win of Michigan. Jordan Nwora has been the key player for this Cardinal team, but he has struggled against any team with a pulse this season. They need Nwora to paly at the level he has in past seasons. Next Game: vs. Florida State (Sat. 1/4).

The Wildcats opened Big East play against Xavier, and there were lucky to escape with a win. Having Bryan Antoine healthy would help keep Villanova at the level they want to be. He didn’t even play in the Wildcats win over Kansas last week. Next Game: @ Marquette (Sat. 1/4).

The Wolverines are thrown into the thick of it as 2020 starts, with an important road trip to East Lansing for a clash with rival Michigan State. Michigan will hope for Isaiah Livers to return from his groin injury as soon as possible. They aren’t getting to the free-throw line, and if the three-point shot doesn’t fall then this team will be in for a tough time in Big Ten play. Next Game: @ Michigan State (Sun. 1/5).

The Wildcats looked to be in for a free-fall, but they were able to respond with a convincing overtime win over rival Louisville. Can Tyrese Maxey consistently put up the numbers he has had against Michigan State and Louisville or is he an only show up ever so often kind of player for the Cats. It’s tough to judge this team so far. Next Game: vs. Missouri (Sat. 1/4).

The Terps are barely holding on to the final spot in the power 16, after a pair of losses in December. The departure of the Mitchell twins has the center spot pretty thin, but freshman center Chol Marial looks ready to fill the void. Next Game: vs. Indiana (Sat. 1/4).

The Spartans were able to pick up their fifth straight victory in a blowout of Western Michigan. That was even without Cassius Winston playing, as he rested to prepare for the tough stretch ahead to start the new year. The Spartans could be in prime position to take a foothold in the Big Ten with their next three games at home. Next Games: vs. Illinois (Thurs. 1/2), vs. Michigan (Sun. 1/5).

Penn State has been the feel-good story of the Big Ten so far. They will start 2020 as an NCAA tourney hopeful but must fight history to make that a reality. Lamar Stevens looks like a legitimate Big Ten Player of the Year candidate. Next Game: vs Iowa (Sat. 1/4).

The Noles get a chance for a big level win, as they visit Louisville this weekend. They are 1-1 in the ACC, and win against the Cardinals could help in their hopes in the ACC gauntlet. The Noles pride themseleves on defense, but Trent Forrest has proven to be their top scoring threat. Next Games: vs. Georgia Tech (Today), @ Louisville (Sat. 1/4).