Get our top College Football futures for the 2022/23 season. Our experts look ahead to the end of the season to find the best NCAAF futures odds and bets, including conference winners, Heisman Trophy candidates, National Championship Game predictions and more.

This isn’t an exciting pick, but CJ Stroud is the favorite for a reason. While it took him a few weeks to get going, Stroud eventually showed out in 2021. The Ohio State quarterback came on strong toward the end of last year, showing his potential for a dominant campaign in 2022. As a true freshman, Stroud finished with over 4,400 yards and 44 touchdowns to just 6 interceptions last season. With a 72% completion percentage and the highest QBR in the nation, Stroud was effective and efficient. While the year didn’t go exactly to plan for the Buckeyes, Stroud’s second season as a starter should be sensational.

While the receiving core did take a hit with the losses of Garrett Wilson and Chris Olave, Ohio State’s offense should be just fine. Stroud still has Jaxon Smith-Njigba on the outside, along with Marvin Harrison Jr. Additionally, TreVeyon Henderson is always a threat out of the backfield, and Stroud should show more willingness as a runner this fall. It’s not a great price, but backing Stroud to win the Heisman is a much better bet than a -200 ticket on Ohio State to win the Big Ten. 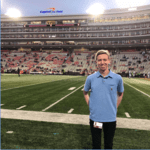 Last season’s Rose Bowl game was an exciting back-and-forth affair, ultimately resulting in an Ohio State victory. This year, I think it’s quite possible that we see a rematch of that game in the College Football Playoff. After fighting off a tumultuous start last year, Utah turned to Cam Rising at quarterback and the team responded. The Utes finished the season on a tear en route to a PAC-12 title and Kyle Whittingham’s bunch should be even better this fall. Whittingham has built a model of consistency in Salt Lake City. You know what you are going to get from Utah every season, and that’s winning.

Rising could be the best quarterback to play the position at Utah. But the rest of the offense is built around a dominant offensive line and running game. Additionally, the Utes should field an experienced defense, particularly in the front seven. With the biggest game of the season against USC coming at home, Utah should get back to the PAC-12 championship game. The Utes are currently sitting behind Michigan, Notre Dame, USC and Texas A&M. Don’t be surprised if they’ve eclipsed those teams by November.

As soon as the national championship odds were posted, I immediately grabbed Ohio State at 8/1. And while this 3/1 price point is the lowest I would go, the Buckeyes still have value at the current number. It all starts with CJ Stroud. As a true freshman, Stroud came on strong toward the end of last year, showing his potential for a dominant campaign in 2022. Now in his second year as a starter, Stroud should build on his 4,400 yards and 44 touchdown showing in 2021.

Around him is an embarrassment of riches on offense. TreVeyon Henderson will lead the rushing attack, while Jaxon Smith-Njigba and Marvin Harrison Jr. stretch opposing defenses on the outside. But the biggest improvement for Ohio State could come on the defensive end, with the hiring of ex-Oklahoma State defensive coordinator Jim Knowles. If the Buckeyes can get consistently solid performances from their defense, the sky is the limit for this group.

There are three main college football futures markets that sports bettors will wager on from before the season starts, right throughout the season, but a whole host of others you can bet on too. The most obvious one of these is betting on a team to win the National Championship. You can bet on a team to win the national championship pretty much right after the National Championship game of the previous season. Another similar type of college football futures betting is a team to make the playoffs. With only 4 teams making the playoffs each year, for now, at least, the odds for these can offer some value. You may see Alabama, Clemson, and Ohio State with short odds, but there is often value in finding that 3rd or fourth team to make the playoffs. The other main market for college football futures betting is a players market, and that’s the winner of the Heisman Trophy award. With plenty of upsets or winners coming from left-field over the years, such as Joe Burrow and DeVonta Smith, you can find some huge-priced winners in this market.

If you don’t want to bet on a team to win it all, or even if you do, betting on a team to win their conference is also a very popular College football futures wager. Sportsbooks will offer odds on just about every FBS conference in the nation in the lead up to the season, and also throughout it, so don’t think that you can only bet on the Power 5 conferences. The more obscure, and often more contested conferences is where our experts here at Pickswise come to the fore. With years of sports betting expertise, our team offer the best free College Football Conference winner predictions throughout the year, each of which comes will full analysis and key stats and data.

Our Heisman Trophy winner picks and predictions are posted well ahead of the season to lock in the best odds, but our team of college football experts also provide regular updates and analysis throughout the NCAAF season. The Heisman race is one of the most talked about parts of college football each season, with wide ranging debates reacting to players’ performances each week on TV and online, as well as having continually updated odds. A Heisman trophy winner pick is and exciting wager to place, and can be a lucrative one if you’re on at tasty odds early in the year.

Some bettors prefer to focus just on a solitary team, be it your alma mater, the team you support, or just a team you have a strong feeling about this upcoming season. This is where the NCAAF Win Totals predictions come in hand. Here you’re just betting on a team to have over or under a set number of wins in the season, with the exact lines differing team to team, and set by the sportsbooks. These markets only include the regular season, and not championship games, so Alabama for example have a line of Over/Under 11.5 this season, must win all 12 games for the overs to cash, it would not included the SEC Championship game should they reach it.