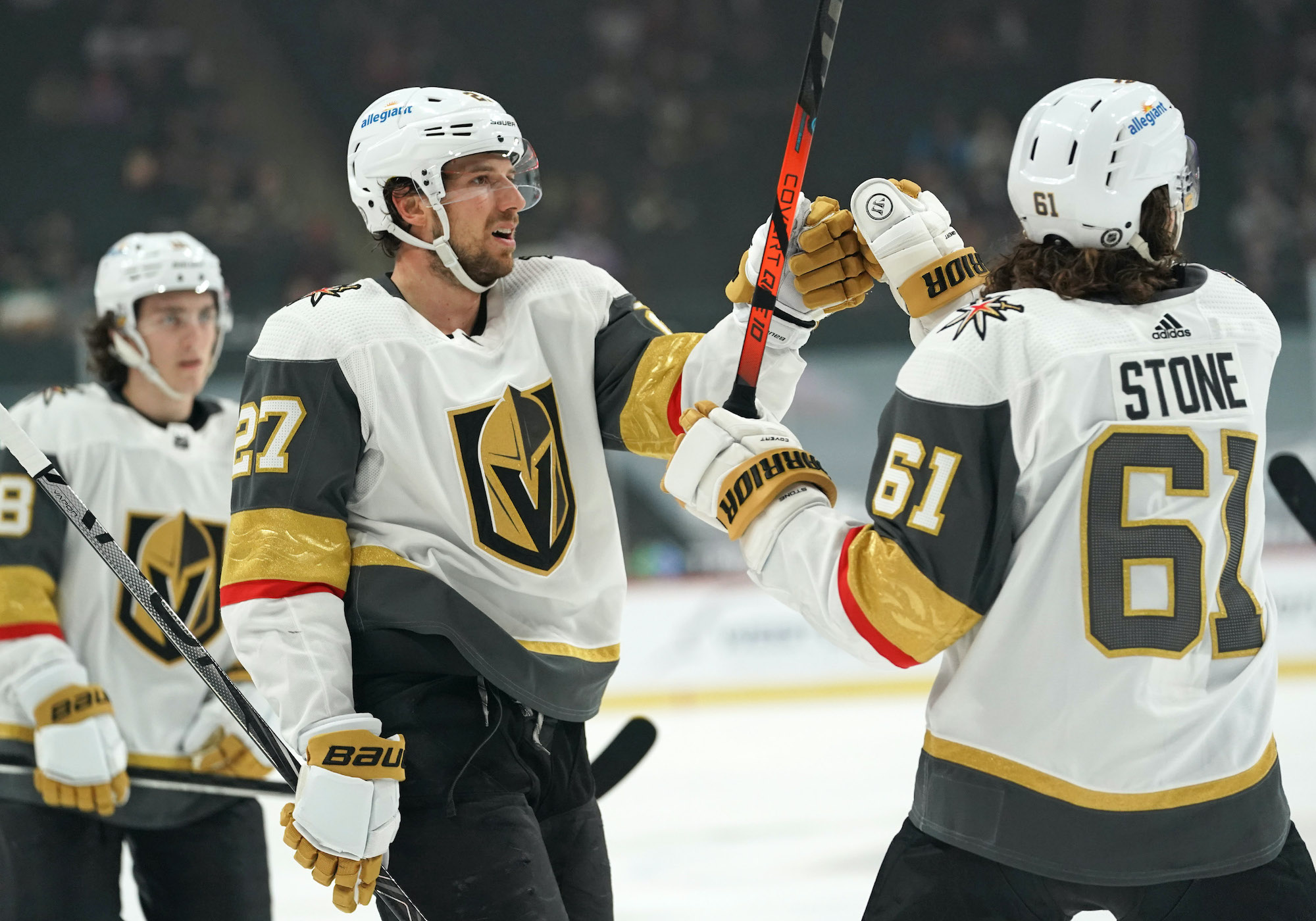 We have separated the weak from the strong in the NHL and now it is time to get serious as we enter hockey fans’ favorite time of the year: the playoffs.

The Boston Bruins and Washington Capitals have the honor of opening the postseason on Saturday night so now’s the perfect time to check on who might be getting their hands on the Stanley Cup when everything is said and done at the end of the postseason.

The Colorado Avalanche started the year as favorites to win the Stanley Cup for a third time and that is where they remain at +450 after an impressive regular season. The Avs just edged out the Vegas Golden Knights to claim both the West Division title and the Presidents’ Trophy, finishing with a record of 39-13-4. No team managed more goals than Colorado in the regular season (197) with Mikko Rantanen, Nathan MacKinnon, and Gabriel Landeskog all hitting 20 goals each, while Rantanen leads the team with 66 points.

The Avalanche will now look to become the ninth team in NHL history to complete the Presidents’ Trophy/Stanley Cup double and start out with a tough First Round series against the St. Louis Blues. The team they just edged out for the Presidents’ Trophy, Vegas, is +550 to win their maiden Stanley Cup, while North Division champions Toronto Maple Leafs are +650.

The defending champions Tampa Bay Lightning are still very much alive and kicking at +750 with Nikita Kucherov and Steven Stamkos set to return from injury to boost the Bolts’ chances of going back-to-back. Carolina finished ahead of Tampa Bay as they landed the Central Division title and the Hurricanes are +850.

Three teams from the slug-fest that is the East Division are next with the Boston Bruins, Washington Capitals, and division champions Pittsburgh Penguins available at +1300. Those odds might have a bit of juice in them for Boston after they ended the season so well.

The remaining teams are available at +1500 or higher, with Connor McDavid +2200 to follow up his ridiculous 104-point regular season by steering the Edmonton Oilers to Stanley Cup glory.

Having picked the Golden Knights to go all the way at the start of the season, there’s no chance of us abandoning that bandwagon given what we have seen so far. No team won more games in the regular season than the Knights as they went 40-14-2, maintaining the franchise’s 100 percent record of reaching the playoffs in their four seasons in the league.

Vegas enters the postseason with the best one-two goaltending tandem in the league with Marc-Andre Fleury and Robin Lehner allowing the fewest goals in the NHL this year. The addition of Lehner in the off-season has not only given Vegas a top-class back-up but has seemingly spurred on Fleury, who has produced a career-high save percentage of .928 with the 36-year-old looking better than ever.

The goalies are well protected by two of the best defensemen in hockey in Shea Theodore and Alex Pietrangelo, the latter proving worth every penny of the $61.6million deal he signed when Vegas landed him in free agency. The Knights have protected their net well all year, allowing the second-lowest shots against percentage and the fifth-fewest efforts on goal.

At the other end of the ice, Vegas has averaged 3.41 goals per game, third-best in the league, with Mark Stone the standout contributor. Stone has 61 points on the year, including 21 goals, while Max Pacioretty leads the team with 24 goals. Their biggest question mark remains at the center position.

Vegas’ reward for finishing second in the West Division is a First Round series against the Minnesota Wild, who gave the Knights a few issues in the regular season. It’s certainly not a gimme of a first round series and, of course, the Avs are likely to be waiting for them in the next round making it a tough road to the Cup.

This is a franchise that has known nothing but playoff hockey though and having reached the Western Conference Finals last year, they know how to grind it out and get the job done. 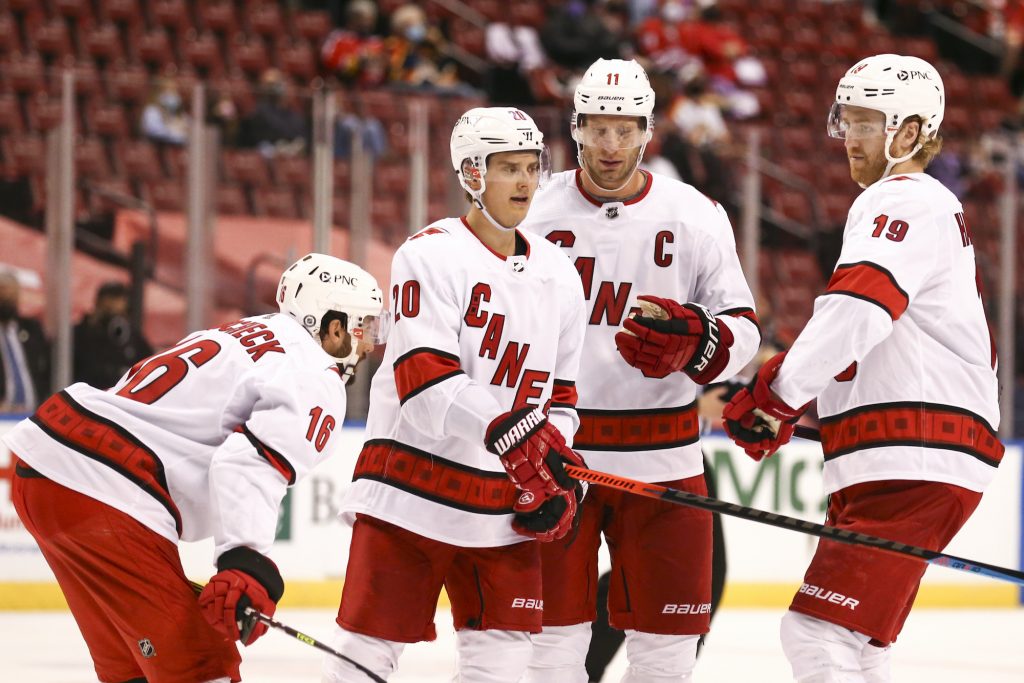 If it isn’t to be the Knights’ year, then the Carolina Hurricanes look to have a great chance of picking up their second Stanley Cup. We have been banging the drum for the Canes since before the start of the season and they have yet to disappoint, clinching the Central Division ahead of reigning Stanley Cup champions Tampa Bay Lightning.

Carolina ended the regular season with 80 points with a record of 36-12-8 and their reward is a First Round series against the Nashville Predators. Carolina won the regular-season series 6-2 with the Preds’ two wins coming in a couple of meaningless games earlier this month.

While discounting the Predators would be a mistake given how hot they have gotten to secure the fourth seed in the Central, this looks a mismatch on paper with Carolina’s power-play prowess likely seeing them through. That will set up a meeting with either the Lightning, who haven’t looked good in recent weeks, or the Florida Panthers, a team the Hurricanes had the better of in the regular season as they won the series 6-2. It all appears set up for Carolina to go on a deep playoff run.

The big question at the start of the season was whether the Canes’ goaltending was good enough and that appears to have been answered with Alex Nedeljkovic, who has the highest save percentage in the league, and Petr Mrazek excellent between the pipes.

The quality elsewhere was more well-known with the top line, lead by Sebastian Aho on 56 points, one to be feared. Aho has 24 points from his last 19 games so enters the playoffs in red hot form. Vincent Trocheck has added depth on the second line, helping himself to 43 points from 47 games, while top defenseman Dougie Hamilton has enjoyed an excellent season.

The Canes have been one of the top teams in hockey this year and there’s no reason why that should change in the playoffs. 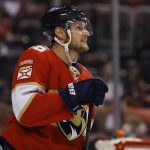