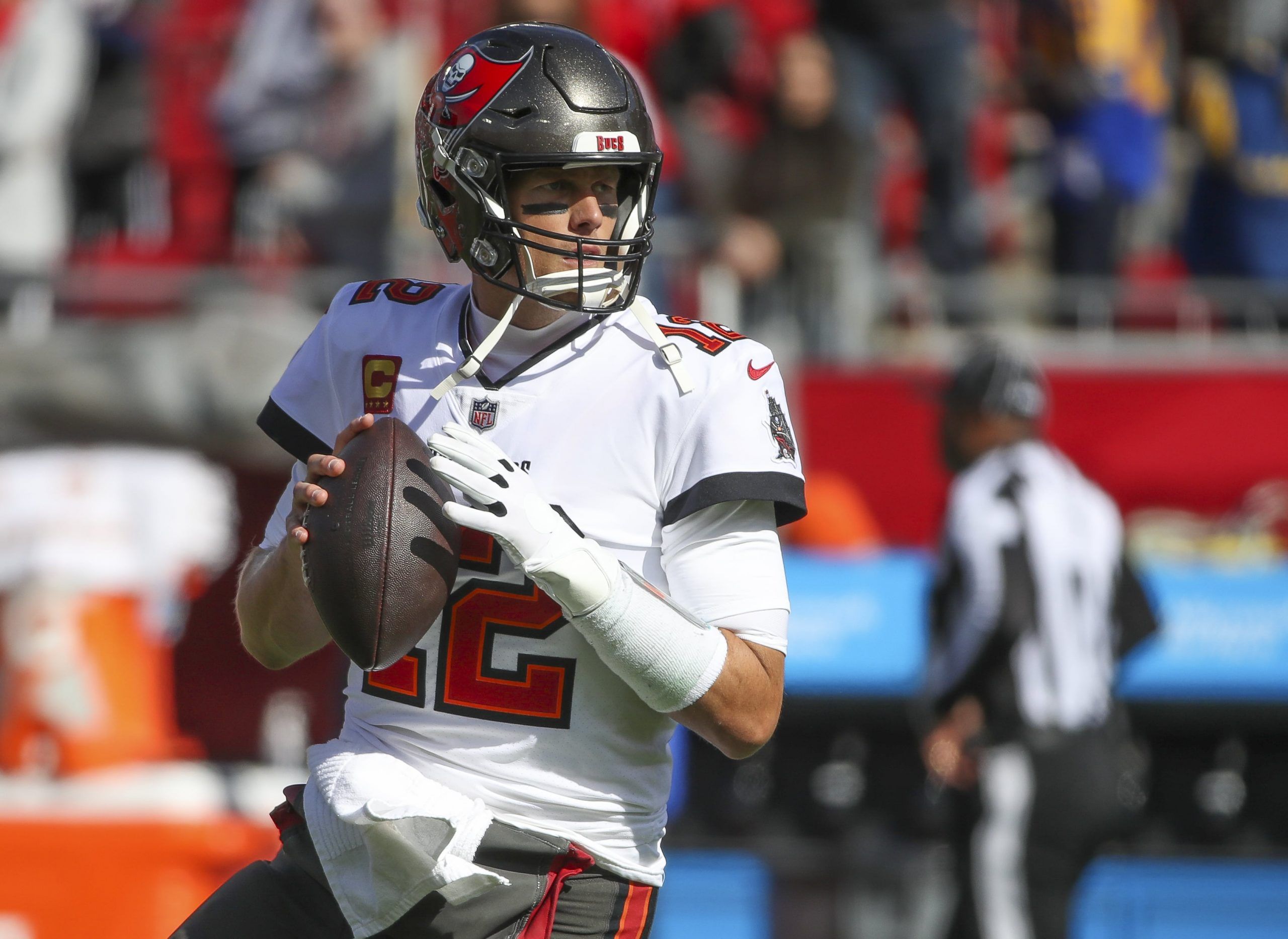 Jared Smith, a versatile host and analyst with over 10 years of experience in sports media and two decades as a sports bettor, has joined the Pickswise team as a lead betting analyst. Smith will serve as a full-time content creator, producing informative and engaging content every day across multiple platforms.
@JaredLeeSmith
Updated: 6:25 AM ET September 02, 2022

Teams across the NFL are finalizing their rosters for the 2022 season, so I am doing the same here at Pickswise. In addition to the talented group of analysts who will be gracing our airwaves to discuss the NFL, I wanted to take a moment to introduce you to our panel of sportsbook traders and data scientists who will be assisting us on our journey through this campaign. If you hear me talk about one of these sportsbooks on the air, the information is likely coming from the following sources. Make no mistake, I could not do my job without their help and collaboration. Thank you!

Okay enough small talk, it’s time to get to work! I reached out to our panel to learn more about which teams have been receiving the most action, who the public loves, and surprising bets from the offseason.  This was a popular column last year, and it was intriguing to see how different some of the answers were from book to book – even more so this year with nearly twice as many oddsmakers on our panel.

Here’s what the oddsmakers are saying this year:

What is your biggest NFL team futures liability?

BetMGM: Including all futures markets, the Denver Broncos are the biggest liability. For just the Super Bowl, it’s the Buffalo Bills.

Circa: The Steelers and Raiders for the Super Bowl. The Texans and Seahawks for the conferences.

TwinSpires: The top 3 in order are the Ravens, Bengals and Bills.

Westgate: Our biggest NFL futures liability is on the hometown Las Vegas Raiders to win the Super Bowl. They opened at 40/1 and are now 25/1.

WynnBET: Our biggest liability is the Washington Commanders. We took a few bets at 100/1 and then moved to 75/1. We are now at 70/1, and have been taking smaller action on them all the way down. We are not high on Carson Wentz, however he will be the best quarterback that they have had in recent times.

What is your biggest NFL player futures liability?

BetMGM: Russell Wilson for MVP is the biggest liability for the player awards.

Caesars: Jameis Winston has been well backed for MVP (90/1) and most passing yards (30/1). Trey Lance (50/1) is second to Winston for MVP even though he hasn’t been fully in charge of a team yet. He’s on a good team with a good defense so he doesn’t have to be perfect.

Circa: Jalen Tolbert and Zamir White for Rookie of the Year. Dan Campbell and Nathaniel Hackett for Coach of the Year. Davante Adams and Trey Lance for MVP.

TwinSpires: Lamar Jackson MVP at 18/1. He is our most-bet player in the MVP futures market.

Westgate: Our biggest player liability is on Mr. Gadget Taysom Hill to win MVP. We opened him at 5,000/1 and are down to 500/1 just based on liability. Next in line is new Colts quarterback Matt Ryan for MVP. We opened at 100/1 and are now down to 60/1.

What was the most surprising NFL bet you took this offseason?

Caesars: Nothing really surprises me anymore, especially after last year with the Bengals having incredibly long odds and making it to the Super Bowl. You can’t say any bet is crazy. You could say a large bet on the Texans (300/1) might be. What happened last year that gets people excited about those teams with longer odds. It adds to people’s excitement, thinking if the Bengals can do it maybe the Lions or the Jets could do it.

TwinSpires: The amount of Houston Texans Super Bowl tickets we have. I have no idea what they’re seeing. I would be shocked if they win more than 6 games.

Westgate: Those Taysom Hill MVP bets were interesting to see. Once you have a year of experience in this business almost nothing that comes across the bet ticker is surprising – you see it all.

Which NFL team is the most popular bet to win their division?

TwinSpires:  LA Rams by far. They have eight times the tickets and six times the money compared to the second most bet team in their division. We’re at +125 for them to win the NFC West.

Westgate: The most popular bet to win their division so far has been the Eagles in terms of ticket count. The team that has seen the most money is the Colts.

Wynn: The most popular bets in ticket count are the Ravens to win the AFC North and the Eagles to win the NFC East. Interestingly, our largest liability for a division is also in the NFC East with the Giants. That division has historically seen large variance with teams coming from last the previous year to win. The NFC East has not had a repeat winner since the 2003 and 2004 seasons.

Which NFL futures market has received the most attention this offseason?

PointsBet: Super Bowl winner is always the most popular NFL futures market, but we are also seeing a ton of action on teams to make or miss the playoffs as well as regular-season win totals.

TwinSpires: The Super Bowl market per usual. We’ve seen an uptick in the total wins market but the Super Bowl will always lead the way.

Westgate: The Super Bowl market has received the most attention. Other markets have been good, but nothing compares to that. The handle on Super Bowl futures is more than double any other futures market for the NFL.

What is the biggest price adjustment you’ve made in the NFL futures market this offseason?

Caesars: Two adjustments stand out. One is Tampa Bay because of Tom Brady. They were 35/1 to win the Super Bowl before he unretired. Now they are 15/2. The other one has been the Broncos, who opened around 50/1. Everyone knew they were looking for a quarterback and when they got Russell Wilson, their odds plummeted. They are currently 16/1. The Dolphins have been another team that has seen big movement. They were 75/1 and are now 40/1. The Dolphins made a few moves, most notably getting Tyreek Hill, but the other teams had big changes at quarterback.

Wynn: The news surrounding Tom Brady and his supposed retirement. The Bucs were around 15/1 to 20/1 to win the Super Bowl, however as soon as he came back we got popped a few times and immediately moved Tampa Bay to a favorite in the NFC.

Westgate: The Bucs to win the Super Bowl thanks to Tom Brady retiring then unretiring. We opened this market in early February and they were 50/1. Right now, we are sitting at 7/1.

Who is the most publicly bet NFL team in Week 1?

PointsBet: The most lopsided action in NFL Week 1 is the Broncos -5 at the Seahawks, the Bills ML in the opening game against the Rams, and the Ravens -6 at the Jets.

Westgate: The Bills on TNF in the opener at the LA Rams. Currently -1, we opened them +1.

Do you think there are any longshots currently undervalued in the NFL futures market?

Caesars: It’s tough now. After what the Bengals did last year, you have the feeling anything is possible. If I had to pick one, I’d maybe look at the Dolphins. I’m not sure I’d say they are undervalued but they are sort of an interesting mid-range longshot. They finished the season so well last year and just missed out of the playoffs, so it is not surprising that a lot of people are backing them.

PointsBet: Vikings +4000 and Ravens +2000. I also think people are starting to overlook the Chiefs with the rest of the teams in the AFC West having a busy off-season and I would play the Chiefs to win the division above +175.

TwinSpires: Colts 22/1 and Ravens 21/1 both stand out to me. The Ravens had some bad luck, losing by three points or less in five of their final six regular-season games. Those swings could have easily gone their way. The Ravens RBs will be healthy and they have one of the league’s strongest rushing attacks. Their defense is solid and should be able to keep them in games. The Colts have a top-3 defense, one of the best offensive-minded coaches in the league and the addition of Matt Ryan is an improvement over Wentz.

Westgate: It’s tough because the market has settled a little bit. For example, the Ravens opened at around 30/1 which bettors felt was too high and the market has adjusted where now you’re seeing between 15 to 20/1. If I had to take a long shot at 100/1 or higher to make some noise I might look to Jacksonville as recently we have seen a lot of second-year quarterbacks find some success, such as Lamar Jackson and Joe Burrow. I’m not sure if they have the team this year but Doug Pederson has a reputation for helping QBs, so I wouldn’t be shocked if they are better than people think.

Which Super Bowl longshots could be this season’s Cincinnati Bengals?

What is the biggest NFL bet you’ve taken so far for this season?

Westgate: We recently took a 5-figure bet on the Chargers to win the Super Bowl at 14/1.

Check out our 2022 season previews of all 32 NFL teams