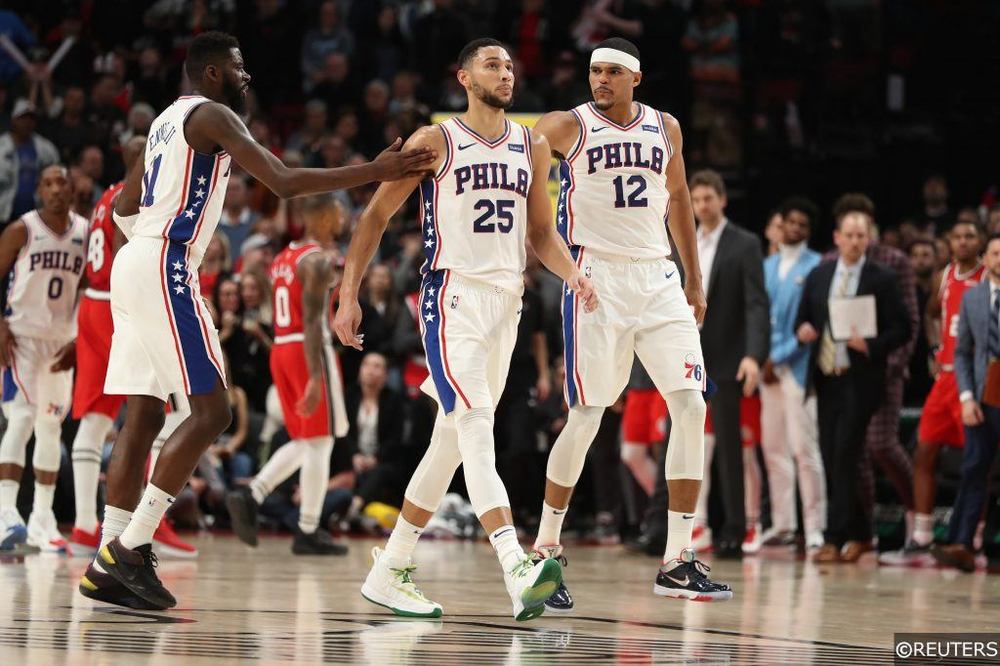 We’re treated to five NBA games on tap for Saturday. The Suns and Sixers kick us off with a matinee showdown in Phoenix. And tonight features four more intriguing matchups, including the Nets visiting the Warriors. All five game lines have the spread at six points or fewer, in what is poised to be a great day of basketball. Before you place your game side or total bets, be sure to check out our full game previews with picks and analysis.

So far this week, I’m sitting at 9-6 with my player prop picks as I look to clinch my sixth winning week in the first seven of the young season. For today, I’ve identified two spots where my analysis has yielded overvalued lines.

Line available at publishing. Playable down to under 30.5.

It’s never easy to take an under on a player who can stuff that stat sheet like Simmons, but this line reads as too high. Simmons is averaging a 30.3 combined line (PRA) this season, and has stayed under this total in 13 of his 23 games. In his road games, he’s averaging 29.1 PRA – the 4% drop off is in line with his career home/road splits. That has translated to the Aussie remaining under this line in eight of 12 road games.

In this one, he’ll be facing a defensive minded Suns team. Phoenix currently ranks seventh in defensive efficiency. Versus teams in the top half of the league in this statistic, Simmons has stayed under this total in eight of thirteen games. And beyond efficiency, the Suns are a slow team, averaging the third-fewest possessions per game.

Unsurprisingly, Simmons garners the majority of his points at the rim. This season, Phoenix allows the 11th-lowest opponent field-goal percentage within six feet of the basket. Furthermore, the Suns are stingy with opponent assists, allowing the fewest per game. And, lastly, Phoenix allows the third-fewest percentage of opposing rebounds to point guards and wings. With the under trending positively in all three statistics, I love playing the combined line.

In this matchup, it’s difficult to see Simmons succeed in all three phases. With the early west coast start time, I’m pulling for a sluggish start and a grind-it-out type game.

Line available at publishing. Playable down to under 17.5 for a partial unit.

Another under, but this time in a game with an over/under of 246.5? Maybe I’m crazy, but there’s value. Oubre is averaging 13.8 points this season, so we’re getting almost five points of wiggle room here. He’s stayed under 18.5 points in 22 of 26 games this season.

I can’t sit here and sell you on the Nets being a good defensive team; they aren’t. However, what they have tried recently is to slow the pace. Through five games in February, the Nets rank 20th in pace (compared to ranking third overall this season). And since the Harden trade, Brooklyn allows the thirteenth lowest three point field goal percentage. In his four high-scoring games this season, 42 percent of his combined points came from behind the arc.

Look, I know it’s not an under isn’t the first notion in a potential track meet type game. But when the numbers make sense, I’m not shying away when I see value. I personally have him projected at 16 points.