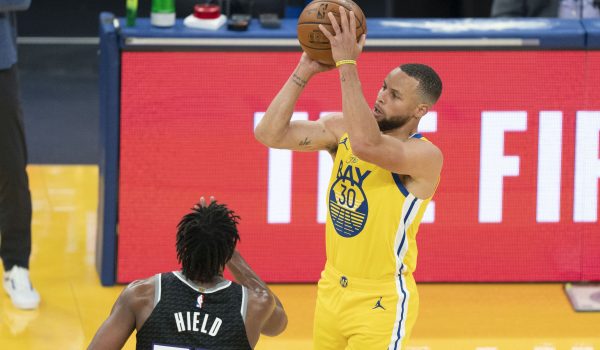 Happy Tuesday everyone! Seven games are on the card in the NBA night which is more than enough to keep bettors busy. Five out of seven games are posted with a spread of six points or less so this should be an excellent spot for prop bettors and we could be in store for some fireworks. Before we dive into my favorite prop bets, make sure you check out all of our experts’ thoughts on the side and total for each of those games.

I’m off to a great 14-4 start at Pickswise, but I’ve got two more strong plays in my sights, so we will try to make it 16-4. Below, I’ve broken down two of my favorite bets and why I think they offer some nice value.

Stephen Curry is playing one of the best seasons of his career. He has 31.4 points on average with unbelievable efficiency, 48% FG, and 43% from behind the three-point line.

The line is at 35.5 because he is on a ridiculous scoring streak, one of the best in NBA history. Over the last 17 games, he went over this line 11 times while having an average of 37.1 points over that period.

The Golden State Warriors are currently in 8th place on the West, only one win ahead of the 9th-placed Memphis. There are only six games left in the regular part of the season, so this is a crucial game. This is a back-to-back game against the Pelicans. Last night, Curry finished the game with 41 points, while the Warriors won by 15.

The Pelicans are one of the worst defensive teams in the league, currently ranked 27th in defensive efficiency. They are also fourth in allowing points to opposing point guards.

Be sure to check out our full game preview for Golden State Warriors vs. New Orleans Pelicans.

Kevin Durant is back after missing the whole season last year, and he is looking better than ever. He has 28.1 points on average with an excellent shooting split 55-48-88.

He is coming into this game after scoring 42 points in two consecutive games. His minutes increased a lot as he played 40 minutes in the last game. The Milwaukee Bucks are a perfect matchup for Kevin Durant. They play at the 2nd highest pace. They are one of the best rim protection in the league while allowing a lot of threes and midrange shots. Durant is probably the best scoring wing of all time and one of the best mid-range scorers the game has ever seen. In the last game, he was shooting 13 from 24 outside of the paint.

The Brooklyn Nets are currently second in the Eastern Conference, one win behind the Philadelphia 76ers and three wins in front of Milwaukee Bucks. Winning today will probably lock their second place and give them a chance to finish in first with only five games left to play, so we are expecting massive minutes from the Brooklyn best players.

Be sure to check out our full game preview for Milwaukee Bucks vs. Brooklyn Nets.