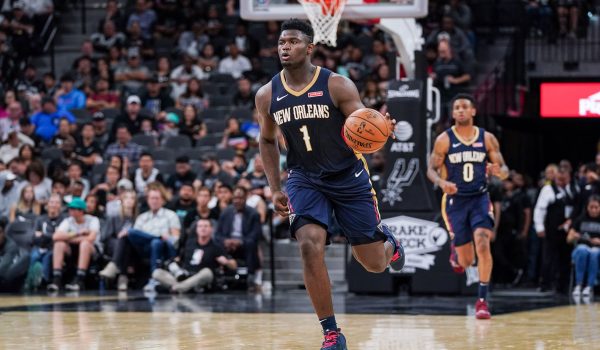 We’re back with the latest edition of Wednesday NBA player props. Ten games on the schedule tonight, with plenty of intriguing, playoff-implicating matchups. If you’re looking for help with your game sides or totals bets, this might not be the article for you. But do not fear, as we have you covered, with all of our analysts’ picks and analysis.

Unless you’ve been actively avoiding the NBA this season, you know how great Williamson has been. The super sophomore is averaging 26.9 points per game, good for seventh in the NBA. As the season has trudged on, Williamson has gained more steam, upping his production to 29.5 points over the last 20 games. During that stretch, he’s reached at least 27 points, 14 times (70%). He’s been an absolute force in the paint, leading the NBA in made baskets within ten feet of the rim, per game.

Tonight, Williamson and the Pelicans travel to Denver to face the Nuggets. Denver has played slightly better than league average defense this season (rating 13th) but has struggled in keeping opponents out of the paint as of late. In their last ten games, the Nuggets are allowing the fifth-most baskets within ten feet of the rim. Zion torched the Nuggets for 30 and 39 points in their two March matchups.

The Nuggets have since acquired Aaron Gordon, who I’m expecting to primarily cover the Duke product tonight. While a good defender in his own right, I don’t foresee Zion facing significant resistance at the rim. Plus, Zion is coming off a low-usage game, per his standards, with only 11 field goal attempts (compared to his average of 16.8). In the preceding five occurrences with 12 shots or fewer, Zion averages 31.2 points in the following game, with an average of 20.8 field goal attempts.

With the Pelicans clinging to a thread of playoff hope, I see them leaning on their All-Star for his typical production. I have the Duke product projected at close to 30 points tonight.

Be sure to check out our full game preview for New Orleans Pelicans vs. Denver Nuggets.

Ayton is putting together another nice season for the Suns and has served as a major part of the team’s ascension to the top of the NBA standings. Averaging a combined 27.1 points, rebounds, and assists (PRA) per game, he’s complemented his All-Star teammates, Devin Booker and Chris Paul, both offensively and defensively.

Over the past month, the big man has been averaging 32 minutes per game. And when he’s seen consistent minutes, he’s produced. When receiving at least 28 minutes of floor time, Ayton averages 29.2 PRA and has eclipsed this total 68% of the time.

Tonight’s matchup, the Clippers, should be conducive to keeping the Suns’ center on the floor. The Clippers play big (with Ivica Zubac and the newly acquired DeMarcus Cousins manning the middle), and should be able to keep the game close. Ayton has had plenty of success versus Los Angeles, and specifically Zubac. Between this season and last, Ayton has averaged 34 PRA versus the Clippers, never dipping below 30. In each game, he saw an increase in paint touches versus his season average.

With the advantageous matchup, I see the Suns getting the ball to their big man plenty tonight. I have the Arizona product projected at 30 PRA, in what should be a highly contested game.

Be sure to check out our full game preview for Los Angeles Clippers vs. Phoenix Suns.

NBA 1h ago
Best sportsbook promotions and odds boosts for Tuesday, May 18, as the NBA Play-in Tournament gets underway