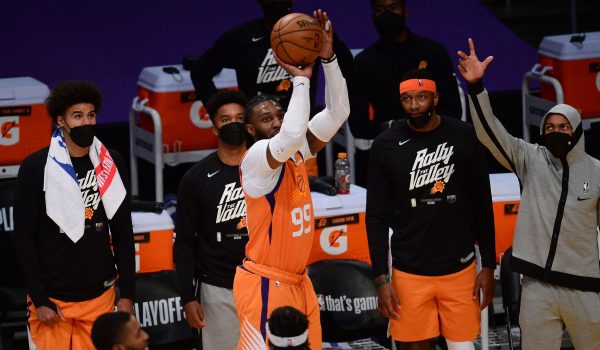 For an NBA bettor, the playoffs can be an emotional roller coaster. With matchups being repeated up to seven times in a row, finding value in NBA player props can be tough. And with one game on the schedule tonight, you can be sure that the all lines will be sharp. Before we dive in to props, make sure you check out how our analysts are picking sides and totals for tonight’s battle between the Nuggets and Suns.

Game 1 between Phoenix and Denver was tightly contested, before the Suns pulled away in the fourth quarter. While one game is a small sample size, there were a few prevailing trends that I’m looking to capitalize for Game 2. One of which is the continued ascendance of Suns center Deandre Ayton. Wanting to jump on his line before it moved, I played the big man’s points and rebounds line last night.

The other play I’m on also involves the Suns. Despite being a lower-usage role player, I’m looking for the Suns’ power forward to make it rain from deep tonight.

Playing for his seventh team, spanning nine seasons, Crowder has established himself as one of the premier “three and D” specialists in the league. Seventy-seven percent of Crowder’s shot attempts in the regular season, and 79 percent in the playoffs, came from behind the arc. He was successful on 39 percent of his regular-season attempts, and after a tough first three games versus the Lakers, Crowder has hit this over in his last four games.

Crowder’s regular-season average was 2.5 made threes per game. But now in the playoffs, not only is he playing more (32 minutes per game versus 27 minutes in the regular season), but he’s more engaged in the offense. In the postseason, Crowder is firing off three-pointers eight percent more frequently than he did in the regular season.

I have Crowder projected at eight three-point attempts in 32 minutes tonight. When taking that many shots, Crowder has made at least three in 21 of 27 games (78 percent) this season. It’s a highly variable prop, but I think he’ll have plenty of opportunities to lead us to the promised land tonight.