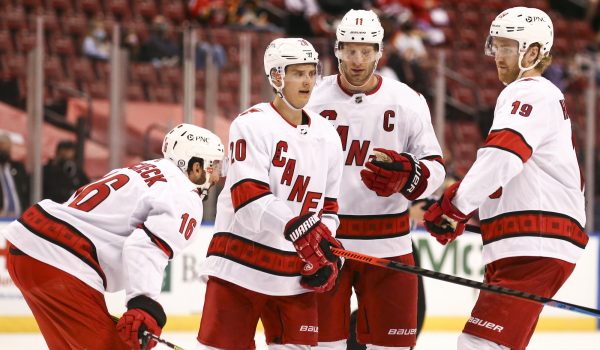 We’ve got a two-game slate for Sunday’s NHL card, but there are still plenty of opportunities to find some value. Right now, we’re going to be focusing on player props, bringing you a few of our favorite props. Before you bet these, make sure you also check out our picks on the side and total for every game.

The Carolina Hurricanes needed six games to put away the Nashville Predators and now will turn their attention to the Tampa Bay Lightning. Plenty of guys contributed in the first-round for Carolina, but Jordan Staal was one of the most consistent. He had six points through the five games and recorded at least one in five of the six games. Sebastian Aho is likely to draw a ton of attention from Tampa Bay, leaving Staal as a good secondary option to record a point. Because he has been consistent at recording points this postseason, we will back him to have a point tonight as well.

Be sure to check out our full game preview for Tampa Bay Lighting vs. Carolina Hurricanes.

We will look for a big game here from Nathan MacKinnon as the Colorado Avalanche will start their series with the Vegas Golden Knights. MacKinnon has been pretty much unstoppable so far in the playoffs, recording nine points in the four-game sweep over St. Louis. Six of his nine points were goals, but to be safe, we will look to play his point prop. In eight regular season games against the Golden Knights, MacKinnon did only have a total of six points. He had points in half of the games, but most of the time he was only able to record one point. Still, that was the regular season and this is the playoffs. He is playing too well at the moment, therefore we are still going to back this point prop at plus money.