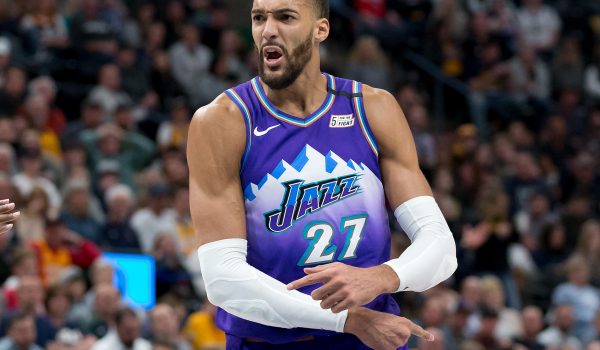 In a bittersweet turn of events, we have only one game on the NBA Playoff schedule tonight.  While we’d all rather a full day of action, we can take solace from knowing that the one game should be a doozy. The Jazz travel to Los Angeles for Game 3 of the Western Conference semi-finals. Before we dive in to props, make sure you check out how our analysts are picking side and total for tonight’s battle.

With the NBA bookmakers free to focus all of their energy on the one game tonight, player prop lines will again be as sharp as ever. That being said, I’m a bit surprised to find a favorable line on Jazz center Rudy Gobert, who is coming off a dynamic Game 2 performance.

Line available at time of publishing. Over 28.5 points + rebounds + assists also playable for a full unit

For those who subscribe to my Thursday email play, this will look a little familar. We played Gobert’s points + rebounds line at 26.5 for Game 2. And for our efforts, the big man rewarded us with 13 points and 20 rebounds.  I try not to be redundant with the plays I write up, but when we’re dealing with a one-game slate, I’m not going to skirt on value.

Gobert was as solid as ever in Game 2. He capitalized on his whopping 33 rebound chances and was efficient with his scoring, despite receiving only eight paint touches. He played 36 minutes, as it appears the Jazz are willing to relent on backup center Derrick Favors’ playing time. The Jazz are +78 in the playoffs with Gobert on the floor, and -23 with Favors. Should this game stay close (which I believe it will), the Stifle Tower should be in line for increased playing time.

The potential for more points

In the second half of Game 2, the Clippers decided to hedge a bit more defensively in an effort to slow down Donovan Mitchell. The results were favorable for Los Angeles, as they were able to eliminate the 13-point half-time deficit. This benefited Gobert, who scored ten of his 13 points in the second half, and was clearly more involved in the offense. I expect a similar defensive strategy from the Clippers in Game 3, including more small ball (23 minutes in Game 2 without a true center). Gobert should see closer to 11 paint touches in Game 3, which I have translating into at least 15 points.

And call me crazy, but even though Gobert grabbed 20 rebounds last game, there was room for improvement. Only one of his rebounds was on the offensive end (he averaged 3.4 on the season), and his conversion rate of 60 percent on the 33 rebound chances was actually below his season average versus the Clippers, which was 63 percent. I don’t expect another 33 chances tonight. However, replicating the 24 opportunities he had in Game 1 should lead to 15 rebounds by my calculations.

If it ain’t broke, don’t fix it. The books adjusted by one point + rebound from the Game 2 line. To me, that wasn’t enough. I have the eighth-year veteran’s line tonight projected in the low 30s.