Best player props for Nets vs. Bucks in the NBA Playoffs on Thursday: Durant ends his rebound streak 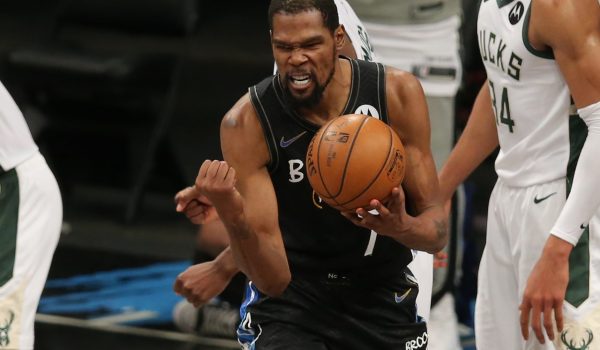 After an incredible night of upsets yesterday, we have a close-out opportunity for the underdog Brooklyn Nets. Kevin Durant and James Harden played incredibly long minutes in Game 5 and it will be interesting to see how that affects their level of play tonight. The season is on the line for the Bucks and with their home crowd behind them, they should not go away silently tonight.

Be sure to check out the full game preview here, but now let’s look at my two favorite player props selections for the game.

Kevin Durant is coming into this after a magnificent Game 5 where he recorded a 49-point, 17-rebound, and 10-assist effort. That marked his second straight game of 11 rebounds or more, but I believe that streak comes to an end tonight. Durant played every minute of Game 5 while James Harden managed over 45 minutes despite his hamstring injury. As a result, I believe fatigue will play a huge part in this one and result in a dominant Bucks win, which could lead to Steve Nash pulling his players early in anticipation of Game 7 back in Brooklyn. If Durant sees his minutes drop closer to the mid 30s, he could certainly struggle to grab enough boards here.

Looking at his performances this postseason, Durant has not been particularly dominant on the boards. Of the 10 playoff games he has appeared in so far, he has only managed to record 11 or more rebounds on three occasions. In this series itself, he failed to do so in the first three games. In Game 5, the likes of Blake Griffin, Bruce Brown, and James Harden all failed to reach their rebounding averages this postseason, and is it is hard to expect the same to be the case here. If any of these players return to their standard numbers on the boards, it should leave fewer to go around for Durant. Back the under tonight.

Don’t forget to read our pick for who scores the first basket in Nets vs. Bucks!

In Game 5 of the series, Pat Connaughton recorded 32 minutes of playing time, his largest total yet this postseason. In that time, he managed to score 10 points off the bench and collect six rebounds. With the Nets playing small ball and Bobby Portis being unproductive off the bench this series, expect the minutes to remain high for Connaughton which should put him in a good position to score tonight. Connaughton is a solid three-point shooter, making just over 37 percent of his shots in the regular season. He is also athletic which allows him to attack and finish at the rim. If he plays gets six or more shots tonight, he should be able to hit this.

If the Bucks end up dominating tonight, it could ensure that their role players see longer minutes as the key starters are rested. That should also allow them to increase their field goal attempts as opposed to tighter games where usually you have one or more of the starters constantly in the line-up, having play running through them. Considering that I am expecting a strong Bucks win tonight, that should not be an issue here. Look for Connaughton to hit double-digit points for the second straight game.