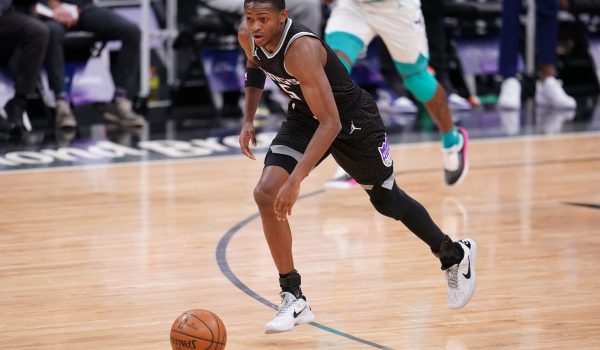 After going 3-1 last night, missing a very hopeful Kyle Lowry pick last night, I’ve got four more picks lined up in hopes of going one better tonight. It’s a small NBA slate of just five games but we do have some immediate rematches of recent games, including Clippers against Spurs and Knicks taking on Wizards. It will be interesting to see what adjustments the teams will be able to make tonight. Plus we are getting plenty of trade deadline action too. Be sure to check out our picks on the side and total for each of tonight’s matchups.

In the meantime, let’s have a look at some of the best player prop picks for tonight’s games.

De’Aaron Fox is currently playing some of the best basketball of his career. His last five points totals read as 37,30,16,29 and 28. In total, he has managed to clear this line in eight of his last 10 games. Tonight’s opponents will be the Warriors who are missing Stephen Curry. Not only should that make it easier for Fox defensively, but Curry is also an underrated defender so him not being on the floor should boost his scoring too.

The Golden State Warriors have recently allowed Ben Simmons, Mike Conley, and Kevin Porter Jr. to have big scoring nights recently, all scoring 22 or more. With the level of aggression Fox has been showing offensively, he too should be able to exceed his average and clear this over.

Be sure to check out our full game preview for Golden State Warriors vs. Sacramento Kings.

Russell Westbrook has as always been a beast rebounding the ball this season, but not against the Knicks. Westbrook is averaging close to 10 rebounds per game on the season and has managed double-digit boards in four of his last six. However, in the two games against New York so far this season he has only managed totals of 9 and 4.

The Knicks have an above-average rebounding guard of their own in Elfrid Payton who can do a decent job of keeping Westbrook off the glass. The Knicks also have a major advantage on the inside as Julius Randle and Mitchell Robinson can control the paint. With the Knicks playing at the league’s slowest pace too, there may not be many opportunities for Westbrook to get his numbers. Look for the trend to continue and back the under on this one.

Be sure to check out our full game preview for Washington Wizards vs. New York Knicks.

The two-headed defensive wing monster that the Clippers possess done a great job of locking up Dejounte Murray and DeMar DeRozan when these teams last met. Derrick White, however, being the third scorer on their team, was not as heavily impacted by them. White has played well after coming back from injury, managing to surpass 15 points in five of the nine games he has played so far.

In his last game, he managed to score 13 against the Clippers in 25 minutes of action. He had not played fewer than 33 minutes in any of the previous four games and it seems likely he would have hit his total had the game not been a blowout. I expect today’s game to be somewhat more competitive, and if White gets to the 30-minute mark, this total is likely to fall.

Be sure to check out our full game preview for Los Angeles Clippers vs. San Antonio Spurs.

With injuries to LeBron James and Anthony Davis, Kyle Kuzma is not starting for the Lakers and trying to pick up the slack. Tonight, he may be asked to do more than ever as trade rumors continue to swirl around his teammates, and if any of them are moved, he could have to assume a huge mantle here.

With that in mind, it seems likely that his current playmaking streak will continue here. He has recorded totals of 6 and 7 assists in his last two games. The 76ers are 6th in the league in terms of pace this season whilst the Lakers are 7th in that category over the last five games. No team allows more fast break points per game than the 76ers and I believe we will see Kuzma leading the charge on multiple occasions tonight. His assist numbers should flourish as a result.

Be sure to check out our full game preview for Philadelphia 76ers vs. Los Angeles Lakers.