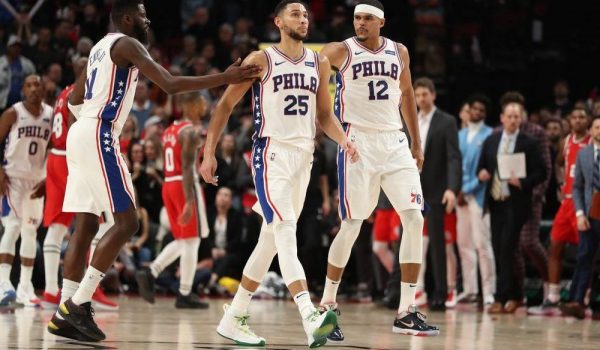 Two critical Game 5s on the docket tonight, with both series knotted up at two games apiece. When best-of-seven NBA series are tied, the winner of the fifth game goes on to win the series 82 percent of the time. All four teams tonight will be pressing more than ever. Before we dive in to props, make sure you check out how our analysts are picking sides and totals for tonight’s games.

With Joel Embiid banged up and Kawhi Leonard declared out, both series in action tonight are in a state of flux.  My best bets of the night focus squarely on two players who will be asked to shoulder a bit more of a load than usual.

After a disappointing Game 4 loss in which they were outscored by 16 in the second half, the Sixers are left in search of answers. Simmons stated he needed to be more aggressive, and Coach Doc Rivers agreed that Simmons should look to be more assertive as a facilitator of the offense. In a decisive Game 5 at home, with motivation in tote, I love this spot for Simmons. Keep in mind that he secured a 11/12/9 line last game, easily eclipsing 28.5 PRA, as he’s done three out of four games in this series.

From a scoring perspective, Simmons has become more involved offensively over the last two games. This coincides with Joel Embiid struggling through his knee injury (admitting as such after last game). And with the Hawks sending different defensive looks Embiid’s way, the Sixers have subtly adjusted by placing him at the high post. Simmons has been able to use his quickness advantage on his primary defender, John Collins, to duck into the low post for easy baskets. The point-forward is leading the way with seven paint touches per game in the series for the Sixers.

In terms of rebounds and assists, I like the value on Simmons’ over for each statistic. The Aussie upped his aggression on the glass last game, securing 12 rebounds (one more than his combined total from the first three contests). And with the Sixers looking to continue to push the tempo, Simmons should reach the 14 potential assists he recorded in Game 4, which resulted in nine dimes.

In the last two games, the fourth-year pro has seen a 20 percent uptick in his front court-touches. The offense will still flow through Embiid, but seeing as he’s not 100 percent Simmons will be relied on heavily. I have the LSU product projected at 32 PRA tonight.

Line available at time of publishing.  OK to play up to over 15.5 points.

The Kawhi Leonard injury news is devastating for the Clippers and NBA fans alike. However, when a superstar goes down it forces the books to adjust on the fly. In this case, I think the line for Morris is still a bit too low.

There should be plenty of opportunity for the Kansas product to seize tonight. I have Morris projected at 18 points.