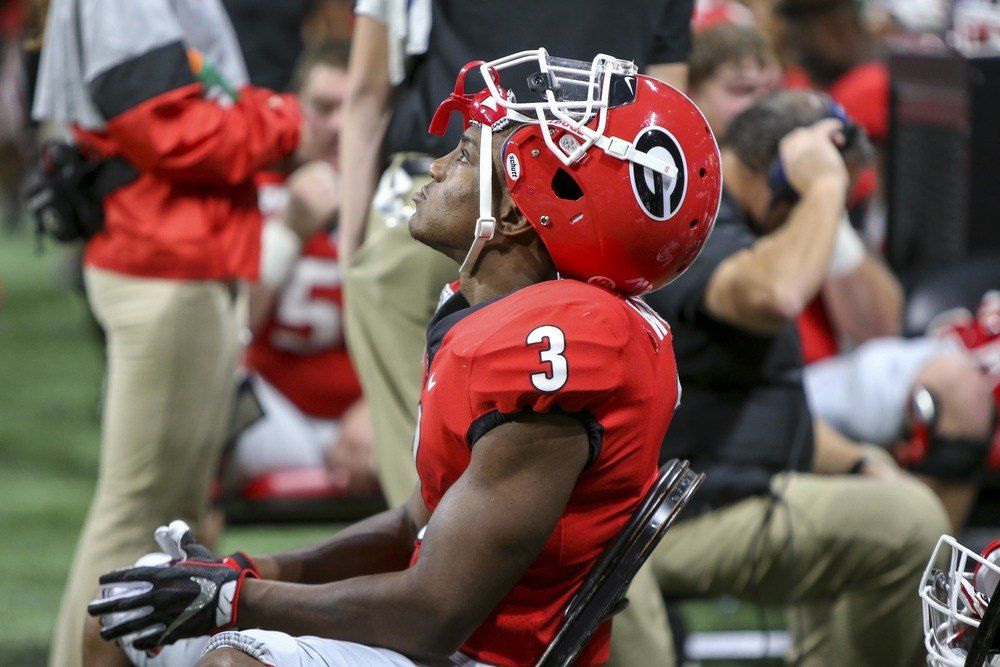 Since graduating from Davidson (The College That Stephen Curry Built), I have been writing about sports -- just about any and all you can think of! -- and coaching tennis in Atlanta, GA. Beyond the four major sports, I am an avid tennis fan and cover the ATP Tour on a daily basis. If I'm not busy writing, you can generally find me on a tennis court or traveling the world wherever a sporting event takes me.
@Dimonator133
Published: 23:22 PM ET August 18, 2020

The 2020 college football season—assuming there is one—has already been a roller-coaster ride…and it is still more than a month away from starting!

It has been on, off, on again, and off again. Now it is on for some teams and some conferences, off for others. The Big Ten and the Pac-12 have pulled the plug on their seasons, unlikely to be saved by the petition put forth by Ohio State quarterback Justin Fields. No college football in the Big Ten will be an especially crippling blow to the Buckeyes, as they were second favorites behind Clemson to win the National Championship and Fields was a second favorite behind Tigers QB Trevor Lawrence to win the Heisman Trophy.

Not long after the Big Ten and Pac-12 made their unfortunate announcements, the remainder of the Power Five members—the ACC, SEC, and Big 12—squashed speculation that they were about to suffer a similar fate and doom the sport entirely in 2020. Those conferences announced that they would press on, continuing to plan for a season.

Those plans took a huge step toward coming to fruition when team schedules were released throughout the past week. Saving the best for last, the SEC joined the ACC and Big 12 on the list of big reveals when it produced the schedules for all of its teams on Monday evening.

In the SEC’s conference-only schedule, each team will—as usual—play against every opponent in its division. Now, however, each team will play against four opponents from the other division instead of two. That brings the total to 10 games, meaning each team has only three of the conference’s 14 teams missing from its 2020 schedule.

Alabama, which is a -143 favorite to win the conference title, added previously unscheduled opponents Kentucky and Missouri from the SEC East. The Crimson Tide already had dates with Georgia and Tennessee on their original schedule. That leaves Florida, South Carolina, and Vanderbilt as the schools Alabama will not do battle with in 2020.

According to the odds, a ‘Bama vs. Georgia SEC Championship is expected. Defending conference and national champion LSU is +650 to prevail once again in the SEC, while Georgia’s conference odds (+200) are far better than those of everyone else in the East (Florida is +1200). The Bulldogs added West members Arkansas and Mississippi State to their original schedule. Not having to play against LSU is a plus, but an already schedule road showdown against Alabama remains a dauting task.

Interestingly, the Iron Bowl between Alabama and Auburn remains on Nov. 28. With the season pushed back a week, that means it is no longer the last regular-season game for either team. Meanwhile, Florida vs. Tennessee on Dec. 5 will mark the first time since 2001 that such a head-to-head rivalry contest will close out the season.

A look at opening week

It is true that most of the marquee matchups are later in the year, but that is not to say week one will be without intrigue. Heck, normally in September the SEC is messing around with opponents such as Alcorn State, New Mexico State, and the Citadel. So, whatever the case, SEC vs. SEC battles are better than almost anything the alternative would have produced.

The opening-week schedule for Saturday, Sept. 26 is as follows (with the lines that were released on Tuesday):

With so much uncertainty surrounding this season, for now it would probably be wise to avoid those games with spreads north of 20 points. As the 2020 campaign draws nearer and we release our weekly college football expert picks, the picture will become clearer in terms of any coronavirus-related issues, players deciding not to play, etc.

At the moment, Tennessee -2.5 over South Carolina may be the most intriguing line. The Volunteers started to turn things around in 2019 year under second-year head coach Jeremy Pruitt with an 8-5 record (5-3 SEC) and they ended it on a six-game winning streak. That stretch included a 41-21 shellacking of the Gamecocks, who went 4-8 (3-5). Sure South Carolina has home-field advantage next month, but in all likelihood there won’t be many—if any—fans allowed in the stands.