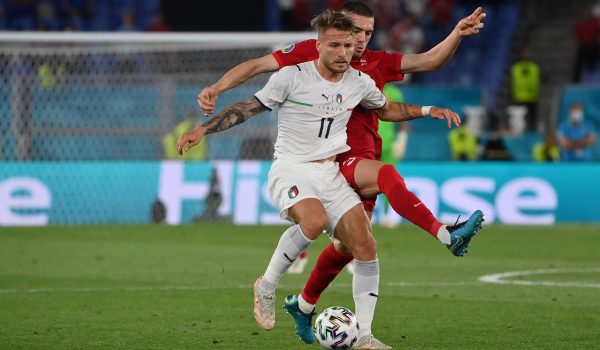 Italy vs. Switzerland is the game of the day at Euro 2020 on Wednesday as the 24 competing teams begin the second round of group games, and we’ve got a great same game parlay for the Rome showdown.

Every team has been in action once now, so we are back in Group A with the Italians taking on Switzerland. Italy did not even qualify for the last World Cup but the Azzurri started their new European Championship campaign in style, beating Turkey 3-0 at the Stadio Olimpico on Friday.

Switzerland was also on top for much of its opening game against Wales, but conceded a late equalizer to tie 1-1. The Swiss face a tough test against Roberto Mancini’s Italy, who enjoyed a perfect record of ten wins from ten games in qualifying.

Here is a look at our same game parlay for Italy vs. Switzerland in Rome.

Ciro Immobile to score at anytime (+175)

This parlay has odds of almost 8/1! Let’s look at each pick in turn and the reasoning behind it.

Both Italy’s offense and defense impressed in its Euro 2020 opener – a 3-0 win over Turkey – and the home team in Rome should be able to record a comfortable win against Switzerland.

The Azzurri have won their last nine games in a row, coming out on top by at least two goals in each of those matches, and that enhances the appeal of backing them at -1 goal against the spread, which means they need to win by two or more goals.

The Italy defense is marshalled by veterans Giorgio Chiellini and Leonardo Bonucci and there is plenty of quality at the other end of the field and the Italians fired 24 shots at the Turkish goal in their first game.

Be sure to check out our full game preview for Italy vs. Switzerland

Ciro Immobile to score at anytime (+175)

Lorenzo Insigne was a livewire in Italy’s opening game against Turkey but the main offensive threat is striker Ciro Immobile, who could again get on the scoresheet in the match with Switzerland.

Immobile has scored four goals in his last five games for the national team and is fresh from scoring 20 times in 35 matches in Italy’s Serie A for Lazio this season. The forward to score at any time is a great selection to add to our parlay.

Switzerland racked up an impressive 12 corners when they played against Wales but that was a game in which they were playing offensive soccer.

Against Italy, the Swiss can be expected to play more conservatively and that could mean a drop in the number of corners they win.

Italy, however, played with plenty of width in the clash with Turkey and Leonardo Spinazzola in particular was very active on their left wing.

The Azzurri were awarded eight corners in the game with Turkey and look a decent bet to win more than Switzerland when the sides meet at the Stadio Olimpico.