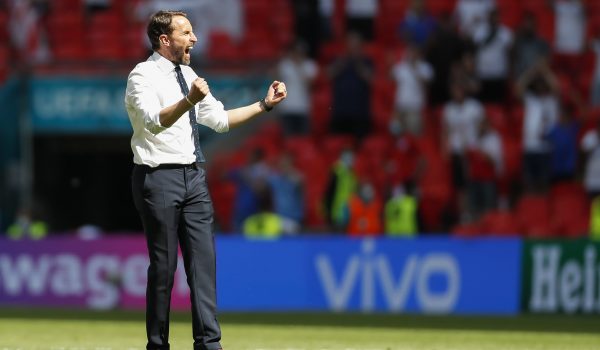 The headline game at Euro 2020 on Friday sees rivals England and Scotland clash at Wembley Stadium in London, as Gareth Southgate’s team looks to book their spot in the Last 16.

England is fresh from edging Croatia 1-0 in a repeat of the 2018 World Cup semi-final encounter while Scotland, who are playing at their first major tournament since 1998, will be looking to pick themselves up after a 2-0 defeat to the Czech Republic at Hampden Park.

Southgate’s side will be all but through to the knockout stage if they avoid defeat while Scotland know a loss in this one will put immense pressure on their final group match with Croatia in Glasgow.

Make sure you check out our picks and best bets for each of Friday’s Euro 2020 matchups.

Here is a look at our same game parlay for England vs. Scotland in London.

The parlay has odds of just over 9/1! Let’s look at each pick in turn and the reasoning behind it.

It was far from sensational but England’s 1-0 win over Croatia at Wembley was a positive first step at Euro 2020 and they are expected to get the job done against Scotland.

The Tartan Army conceded two great goals in their loss to the Czech Republic but had only themselves to blame after failing to score from 19 shots, and they are unlikely to get anywhere near as many chances against England.

The Three Lions have won each of their last seven games and edge Scotland when it comes to tournament experience, having made the semi-finals of the last World Cup, so they are an obvious first selection in the parlay.

Be sure to check out our full game preview for England vs. Scotland

In the early stages of this tournament it looks as though it could be slow and steady from England, who beat Croatia but managed only two shots on target in the contest, and another low-scoring game looks likely against the Scots.

England does not need to overcommit to their offense in this game and can be expected to rotate their roster with more grueling matchups to come in the knockout stage.

Each of their last three games have resulted in 1-0 wins and four of their last five games have seen under 2.5 goals. With Scotland having shown a lack of quality in the final third last time out, the under could again be the way to go here.

It doesn't take long for England to put the heat on Croatia! Phil Foden finds the inside of the post, but doesn't find the ricochet he's looking for. #EURO2020 pic.twitter.com/4frKtaqeGT

Raheem Sterling scored the decisive goal in England’s opening win but before that his Manchester City teammate Phil Foden had come closest for Southgate’s side, clipping the post.

Foden started as part of a front three for England last time and should keep his spot after impressing at Wembley.

He scored 16 goals for club side Manchester City in all competitions in the 2020-21 season and looks primed to find the net against Scotland.