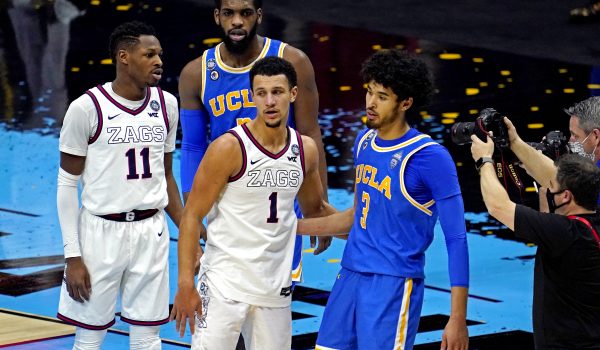 Just when you thought this college basketball season could not get any crazier, Gonzaga-UCLA happened.

In what will go down as one of the most memorable games in NCAA Tournament history with an iconic moment at the end, the Bulldogs kept their perfect season alive by beating the Bruins on a buzzer-beater in overtime. Thus it will be No. 1 overall seed Gonzaga vs. No. 2 overall seed Baylor in the National Championship on Monday night.

It can’t possibly get any better than what we just witnessed, but it should be pretty darn good.

First, let’s take a look back at what transpired on Saturday.

Nobody will remember it given what happened later in the night, but there was another game other than Gonzaga vs. UCLA. It wasn’t just that the nightcap was an instant classic; it was also that the first semifinal was a snooze-fest from start to finish. As we predicted in our game preview, Baylor had no trouble covering the -5 spread against Houston. In fact, it was pretty much over right when it started. The Bears delivered a basically flawless first half to take a 45-20 lead at the intermission

That was one of the best halves of two-way team basketball I’ve ever watched at the college level.

Both teams did little more than go through the motions over the final 20 minutes, so there really isn’t much else to say aside from the fact that Baylor looked scary good. Even if Gonzaga had destroyed UCLA like it had done to all of its other opponents throughout March Madness, the Bears still would have taken plenty of confidence into Monday.

One for the ages

And then there was Gonzaga-UCLA. Yes the 14.5-point spread turned out to be a laugher, but let’s not even dwell on lost bets (admittedly we lost ours on the Zags -14.5, as did the majority of the public). Let’s just enjoy that game for what it was: an instant classic.

Playing the kind of basketball that belied its No. 11 seed, UCLA pushed Gonzaga for a full 40 minutes and an extra five—making it the Bruins’ third overtime game of this tournament. It was no fault of their own that this time they finally came up short. The Bulldogs simply came up with truly special heroics when it mattered most. The fact that Jalen Suggs’ block-to-assist transition wasn’t even his most amazing play of the game is hard to believe. Shortly thereafter, Suggs delivered a Christian Laettner-like buzzer-beater to end UCLA’s run in heartbreaking fashion and keep Gonzaga’s perfection intact in the most unbelievable of ways.

A GAME FOR THE AGES!

Jalen Suggs drains a heave for No. 1 Gonzaga to take down No. 11 UCLA and advance to the #NationalChampionship!

UCLA’s effort on Saturday and its entire run in the NCAA Tournament is worthy of penmanship in an epic novel, but for now we have to look ahead to what’s in store on Monday. And is if we are spoiled for riches, another incredible contest could be in the cards.

Gonzaga and Baylor have been the two best teams all season long. Covid-19 denied us a head-to-head matchup early in the season, but perhaps it’s just as well. Now we get to see it for the first time on the biggest stage in college basketball. Not only is it the two best teams, but the individual star power is also off the charts in the form of Suggs, Corey Kispert, Drew Timme, Jared Butler, MaCio Teague, Davion Mitchell, and more. Talk about an embarrassment of riches!

I thought Baylor’s dominance and Gonzaga’s surprising scare against UCLA would create some value on the Zags. But, alas, that is not the case. They have opened as considerable favorites over the Bears—either -4.5 or -5 depending on the book.

We will dive into that in due time. But as already mentioned, for now let’s merely enjoy what we just witnessed.