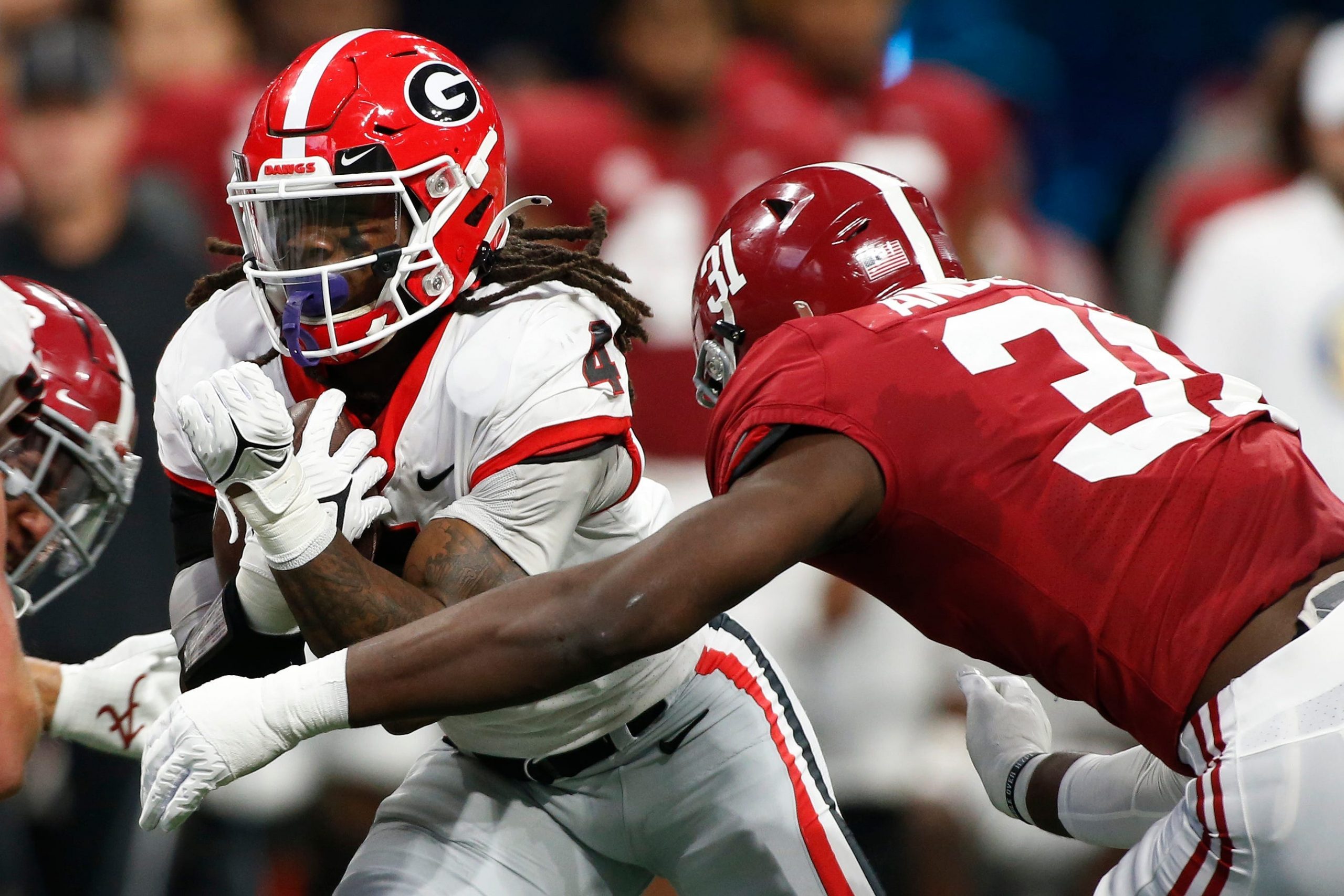 Amazingly enough, Alabama vs Georgia is not No. 1 vs. No 2. But nobody – not even SEC haters – in their right mind would say that these aren’t the two best teams in college football. The Crimson Tide and Bulldogs are the best…and it’s not even close. The result is an epic matchup on paper and hopefully a memorable contest on the field when the National Championship is played next Monday Night in Indianapolis.

Let’s not waste any more time before we go in-depth into one of the more intriguing College Football Playoff championship games in recent memory. Here we go!

Breaking down the Alabama Crimson Tide

Alabama – by its lofty standards – thoroughly underwhelmed throughout the regular season. The Crimson Tide lost to Texas A&M and struggled with Florida, LSU, Arkansas, and Auburn. But this program turns on the afterburners when things get serious and it has looked great in the last two games. ‘Bama beat Georgia 41-24 in the SEC Championship and then eased past Cincinnati 27-6 in the Cotton Bowl.

Still, all is not perfect in Tuscaloosa. Wide receiver John Metchie III suffered a torn ACL in the SEC title tilt and Alabama lost three starters to injury against Cincinnati (two offensive linemen and a cornerback). Their statuses for next Monday are unclear.

Breaking down the Georgia Bulldogs

Only one question remains when it comes to this Georgia team: can it beat Alabama? From a personnel standpoint (especially on defense), the Bulldogs are the most talented team in college football. I want to say they are the “best,” but you can’t argue that unequivocally when they just lost to the Crimson Tide. UGA has positively destroyed everyone else (including Michigan 34-11 in the Orange Bowl), but head coach Kirby Smart’s crew just seems to have a mental block in this particular matchup.

The key to this upcoming contest is quite clearly Stetson Bennett. Georgia’s veteran quarterback has played stellar, mistake-free football against almost every opponent other than ‘Bama the past two seasons. In two games against the Tide, however, Bennett has completed only 47 of 88 passes and has been intercepted 5 times.

Check out our full game preview for Georgia vs Alabama, with picks on the side and total

Admittedly, I do not have a good read at all on the side for this National Championship. Georgia – despite the SEC Championship result – arguably has the physical edge. I truly believe the Bulldogs are the best team in college football, and perhaps by a comfortable margin. But Alabama obviously has the psychological edge. The Crimson Tide have won a lot more titles, have owned this head-to-head matchup, and Nick Saban consistently gives free coaching lessons to his former assistants (aside from Texas A&M’s Jimbo Fisher earlier this season). I don’t want to bet against a team that is superior on paper. I also don’t want to bet against a team that just won the head-to-head meeting from four weeks ago by 17 points.

If I had to lean one way or the other, it would be to Georgia because it’s easier to be the hunter than the hunted and Alabama is more banged up. But I’m not enthused about giving 3 points to the top-ranked team in the nation. Give me the Dawgs on the -145 money line.

Like with most UGA games, I feel better about the under than the side. The Bulldogs’ defense is one of the best in college football history and it bounced back nicely from its unusual performance against Alabama by dominating Michigan in the Orange Bowl. Georgia and Alabama gave up a combined 17 points in the two CFP semifinal games and 8 of those stemmed from a meaningless late touchdown by the Wolverines.

Georgia as team generally screams, “under!” As for Alabama, its offensive injury issues and its history of defensive success against Bennett also have me going in that same direction. Under 52.5 is my best bet for the game.

Be sure to read Ross Tucker’s best bet for the CFP National Championship game!