Miami Dolphins: What will their 2020 season record be? 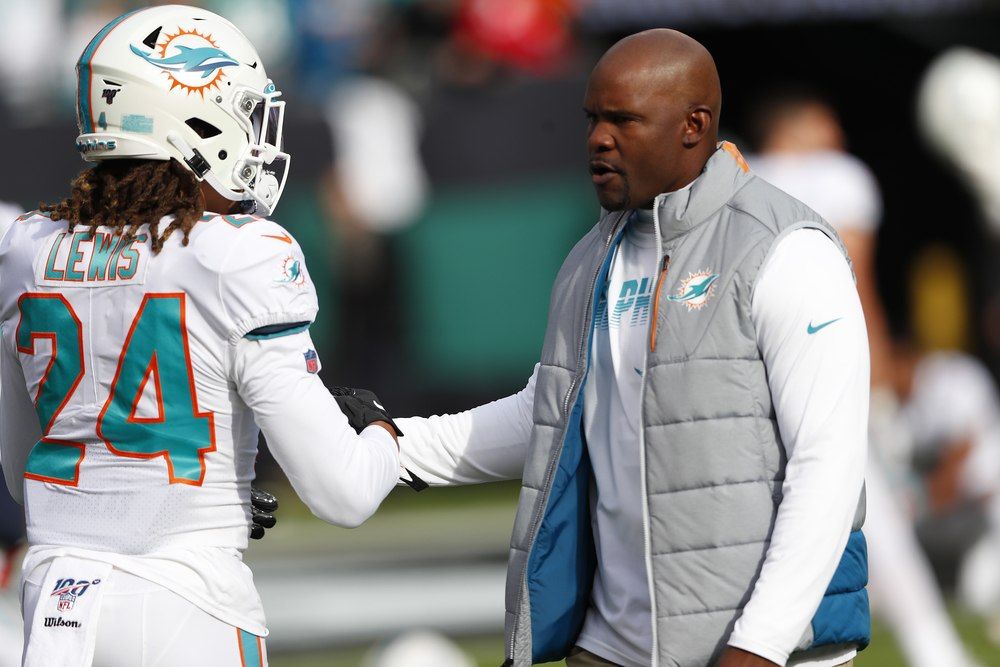 Miami’s 2019 season didn’t necessarily go as planned, as the organization didn’t completely bottom out as many expected. Instead, the Dolphins finished the campaign with a 5-11 record, taking them out of contention for Joe Burrows and the first-overall pick.

Still, the Dolphins managed to take a step forward this past offseason. They drafted Tua Tagovailoa with the fifth-overall pick, and they added a number of notable free agents (including cornerback Byron Jones and linebacker Kyle Van Noy).

Will those additions be enough to help the Dolphins take another step in 2020? That’s what we’re attempting to find out. Below, we’ve explored the outcomes for each of the Dolphins’ games next season.

It’s worth noting that we’re assuming veteran Ryan Fitzpatrick will be under center to start the season; considering Tagovailoa’s professional inexperience and injury risk, we think it’ll be a while before the rookie finally hits the field.

With that said, let’s see how the Dolphins will fare next season:

Since 2009, the Dolphins are 1-10 playing in Foxboro. Sure, the Patriots may have some uncertainty at quarterback, but they’re still rostering a number of players who guided them to 12 wins last season. Loss

Buffalo could end up emerging as the best team in the AFC East, and games in Buffalo are never easy. While the Dolphins should eventually have the talent to top their division rival, that won’t be in 2020. Loss

Don’t let the Jaguars’ 6-10 record from 2019 fool you – Jacksonville could easily be the worst team in the NFL next season. The Dolphins have enough manpower to top them, regardless of who’s under center. Win

These teams rarely meet up, but it’s worth nothing that Seattle has a single win in Miami since 1984. Plus, Fitzmagic should be able to lead Miami to at least one unexpected victory. Win

While it’s never an easy task winning in Denver, the Dolphins arguably have the superior roster. Win

The Chargers beat the Dolphins by 20 when these teams met in Miami last September. While these teams may be a bit more equal this time around, the Chargers should still have the firepower to pull off a victory. Loss

There’s plenty of uncertainty surrounding the Rams, but the team could easily be primed for a bounce-back season. Plus, the Rams will definitely be looking to enter their Week 9 bye with a victory. Loss

Similar to the Dolphins, the Cardinals are also in the midst of a rebuild. The difference? The Cardinals have already had their franchise quarterback under center for a year, and they started to load up this past offseason. Loss

Organizations generally want to give quarterback prospects an opportunity to succeed in their first career start. Well, with the 3-6 Dolphins eyeing a home game against the inferior Jets, it seems like the perfect chance to showcase Tua Tagovailoa. Considering the rookie’s talent (and the lack of professional tape), it wouldn’t be shocking to see him guide the Dolphins to a victory. Win

The Jets will have another shot at Tagovailoa, this time in their own building. Considering New York has already seen four quarters of the prospect, they’ll be better prepared this time around. Loss

Records be damned, this will still be one of the most anticipated games of the weekend, as Joe Burrows faces off against Tua. Regardless of what you think about the two quarterbacks, it’s clear that the Bengals need a lot more work before they can suddenly win on the road. Win

The Chiefs have a great chance to repeat as Super Bowl champs, and it’s unlikely a rebuilding Dolphins squad will give them any issues. Loss

While the Patriots have dominated the AFC East in recent years, they’re only 2-5 in their last seven games in Miami. While Bill Belichick always seems to fool rookie quarterbacks, speedy signal-callers are one of his few Achilles heels. If Tua’s for real, he’ll be able to guide Miami to a win here. Win

This seems like a trap game for a Dolphins squad that’s probably out of the playoff picture. The Raiders aren’t very good, but they’re comparable to the Dolphins, and the location serves as the tie breaker. Loss

The Bills could be battling for top seeding in the AFC, so it’s unlikely they’ll turn to their backups in Week 17. Meanwhile, with the Dolphins out of it, they’ll likely see what they have in some of their bottom-of-the-roster players. Loss

We have the Dolphins finishing the season with a 6-10 record. While that may seem like an underwhelming improvement from a 5-11 2019 campaign, it’s worth noting that we have Tua going 3-4 as a starter. The future is bright in Miami, but they’ll need a bit more time before we start taking them seriously.