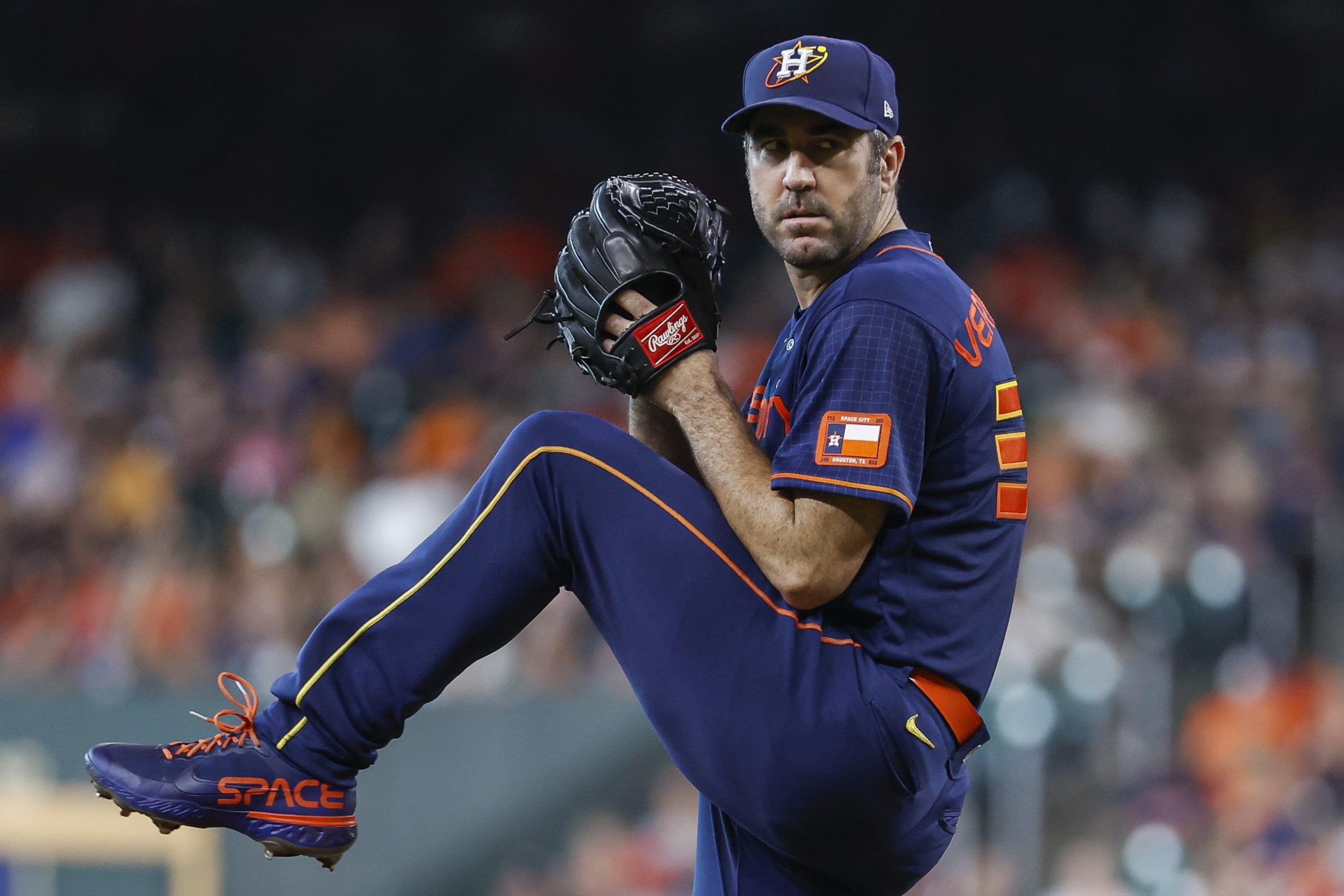 A Bostonian with a love for stats and baseball. Using knowledge and passion to find the right bet in MLB, NBA, NFL, and more. A lover of bold sports takes and sweat free plus odds picks.
@keithps22
Updated: 19:19 PM ET October 06, 2022

Welcome to postseason baseball. After a grueling 162-game season, we are left with 12 teams to compete for the Commissioner’s Trophy. Eight teams will play in a best-of-3 wild-card series, which is followed by a best-of-5 Divisional Series with the 8 remaining teams, and the four winning teams will advance to their Conference Series that is best-of-7. After that is the World Series, and with such a balanced field this season, it could be anyone’s year.

I finished the MLB season +62.6 units for Pickswise, and I’ve chosen my two best bets for the postseason. Let’s look a look at each team’s odds to win the World Series and get right into my bets!

Arguably the most dangerous offense with a starting rotation that can shut down any team. Los Angeles is ready to return to the World Series with a vengeance.

Justin Verlander is 39 years old, but he is pitching like he is in his prime. He leads a Houston starting rotation that has been exceptional from Opening Day to now. Watch out for the Astros.

They clinched the NL East and they are still hungry. Atlanta is one of the youngest teams in the postseason with rookie sensations Spencer Strider and Michael Harris adding to an already dangerous Braves team.

Aaron Judge is the heart and soul of the Yankees offense. He may have hit 62 home runs in the regular season, but the scouting report on the Yankees is out and weaknesses are becoming seen.

The Mets led the NL East for 175 days and they did not win the division. A massive choke by the Mets forced them into the wild-card round, a series they were hoping to avoid.

The Blue Jays lineup is stacked. Bo Bichette was hitting the cover off the ball in September and it’s hard to forget about Vladimir Guerrero Jr., too. Toronto is ready for postseason baseball.

Another massive collapse was the Milwaukee Brewers losing their lead of the NL Central and then missing the playoffs all together! A late-season surge by the Cardinals has them facing the Phillies in the Wild Card round.

The Phillies can thank for the Brewers for their postseason spot, as they weren’t expected to be in the postseason until the last few weeks. But with a healthy lineup, the Phillies are ready to make some noise.

Juan Soto, Josh Bell, Manny Machado and more. The Padres have one of the best offenses in baseball — at least on paper. They have struggled with their new stars. In an all-or-nothing season for San Diego, it’s looking like the later.

The Rays once again sneaked their way into the playoffs and fortunately for them, Tyler Glasnow is back. But their offense is below-average and might struggle against good pitching…like Shane Bieber, whom they are facing in Game 1 of the wild-card series.

For the first time since 2001, the Seattle Mariners are in the playoffs. It’s been a long wait for Seattle fans, but with the Blue Jays standing in their way of the Astros, it might be a short-lived postseason for the Mariners.

Most expected to see the Chicago White Sox in this spot, but the Guardians were one of the bigger surprises of the season. With an excellent starting rotation and a top-5 bullpen, Cleveland is a dark horse this postseason.

The wild-card round features 3 incredibly balanced matchups and 1 that should be over in 2 games. They are best-of-3 series, and each series will take place in the same location. That means this particular best-of-3 set will take place in Toronto and automatically give the Blue Jays a home-field advantage. The Mariners announced that Luis Castillo will start Game 1 and he will be opposed by the Blue Jays’ Alek Manoah, and I expect Game 2 to feature Robbie Ray in his return to Toronto against Kevin Gausman.

In Game 1 the pitching advantage goes to Manoah. He has a 2.42 ERA and a 0.92 WHIP at home while limiting opponents to a .191 batting average and a .256 OBP. His last start of the season was at home, and he threw 6 shutout innings and surrendered just 2 hits. That outing extended his streak to 15 scoreless innings over the span of his last 3 starts. As for Castillo, he’s been roughed up recently as he allowed 10 runs and 15 hits in his final 3 starts of the season, which came against Oakland twice and Kansas City – 2 pathetic offenses. As for Game 2 I expect a slightly higher-scoring game since Ray has been burned by the long ball all season, and Gausman has been prone to extra-base hits. However, neither team has announced their Game 2 starters — so that is just my best guess.

The last time the Mariners went to the playoffs was in 2001, and they lost in the ALCS to the Yankees. Fast forward to 2022 and I don’t expect Seattle to make it as far. Toronto ended the regular season on a tear at the plate, ranking 1st in BA, 2nd in OBP and 2nd in OPS in the final 30 days. Bo Bichette is seeing a softball for a baseball, as he finished September with a .403 average, and you can’t pitch around him because he is followed by Vladimir Guerrero Jr, Teoscar Hernández, Alejandro Kirk and more. And don’t forget about George Springer leading off; he hit .333 in his final 15 games. Toronto boasts one of the best offenses in the postseason from the leadoff spot to the 9-hole, and Seattle won’t be able to contain all 9 hitters.

The price of the Blue Jays to win the series is steep at -174 on FanDuel and -170 at DraftKings, so instead, I’ll back Toronto to sweep the Wild Card series at home at excellent value.

The Astros have the most balanced team in the American League. The reason my best bet isn’t for the Astros to win the World Series is because of the star-studded Dodgers in the National League. But the Astros should win the AL without much trouble, in my opinion, as they earned a bye through the wild card — which means they get to rest until next Tuesday while their competition has to play at least 2 games and maybe 3. That gives their starting rotation and bullpen extra rest that they haven’t had all season long — an immediate advantage.

Houston has been exceptional the entire season, but to factor in their trade-deadline acquisitions, I’ll focus on their second half of the season. Their starting rotation finished 1st in ERA and 2nd in FIP, while their bullpen finished 4th in ERA and 2nd in FIP. Their rotation is led by future 2022 AL Cy Young winner Justin Verlander and followed by Framber Valdez, Lance McCullers Jr. and Cristian Javier. The highest ERA of those four starters was by Valdez, who finished with a 2.82 ERA. On any other team, he would be their ace, and that just proves how deep the Houston rotation is. Their offense finished the second half of the season ranked 7th in BA, 9th in OBP and 7th in OPS, and it’s hard to narrow down one hitter than another considering Jose Altuve hit .300, and Yordan Alvarez had a 1.019 OPS. The entire lineup contains the ability to hit for power and contact, a mix that is incredibly rare in baseball.

There is not one team in the American League that has a good chance to beat the Astros in a 7-game series. Alek Manoah and Kevin Gausman will be on too short of rest to pitch in game one of the series if Toronto wins the wild-card round, and as we saw in the second half of the season if the Blue Jays have to rely on Mitch White or Jose Berrios, they lose. I anticipate a 3-1 series in favor of Houston in the ALDS if it’s against the Blue Jays, which will bring the Astros to the ALCS to face either the Tampa Bay Rays, Cleveland Guardians, or New York Yankees. That section of the postseason bracket is by far the weakest, and I expect the Yankees to come out victorious in their divisional series, but if the Guardians or Rays could complete an upset, then it would make it even easier for Houston. But if it is New York, we have seen numerous weaknesses come to light in the second half of the season. The Yankees’ bullpen is no longer elite, their rotation is prone to the long ball, and their offense will live and die by Aaron Judge.

It could be Houston’s year to win it all, but admittedly the Dodgers scare me, so backing Houston to win the American League is one of my favorite bets to make in the postseason.