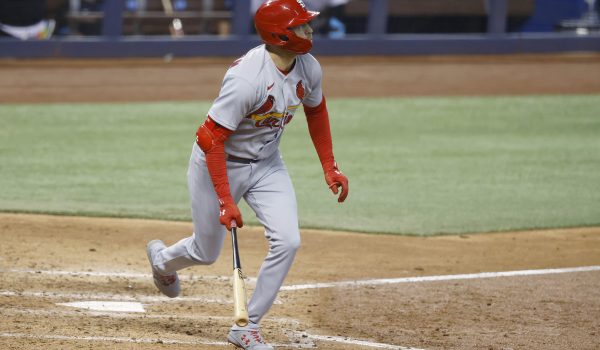 The MLB season is officially in full swing, and it’s been long enough for us to more or less know where things stand. We’ve got a nice big slate on Sunday, and one of the best games is this NL Central rivalry clash on Sunday Night Baseball between the St. Louis Cardinals and Chicago Cubs. It should be a great one, broadcasted wide by ESPN.

We’ve got a three-leg parlay here, one which pays out just shy of 25/1 with FanDuel Sportsbook. Let’s break it down:

The Cardinals haven’t played their best recently, but I’m not too concerned about the lineup. Although they’ve lost the first two games of this series, they still scored five runs in the opener and eight runs in their game before that against the Indians. Cardinals starter Carlos Martinez has had some meltdowns this year, but he’s also had some gems.

That variance, with a good amount of upside still possible, is what attracts me to Martinez on a long-shot play at 25/1. Despite his high ERA, the Cardinals are 4-3 in his last seven starts. The Cubs will start Zach Davies, who has been highly mediocre with a 1.57 WHIP. Martinez’s is only 1.29. With this being the end of a rivalry series, St. Louis will be going all-out to avoid getting swept.

This is a bit of a contrarian play, since Carpenter has been struggling this year. But getting +360 is too good to pass up considering Carpenter’s history against Davies. In 25 career at bats against Davies, Carpenter has 12 hits; four doubles and three home runs. That’s good for a 1.567 OPS. Needless to say, if there was ever a spot for him to get back on track, it’s now. Carpenter has been picking things up a bit recently, and is 5/12 in his last few games.

These plays all correlate heavily. If Carpenter has a big day, that’s very good news for the Cardinals’ -2.5 run line. If Martinez has a big day, it’s even better news. As I mentioned above Martinez has shown he’s still more than capable of throwing some great games, like when he tossed eight shutout innings last month. In two of his last three starts, he’s gotten to at least six punch-outs.

The only outing he didn’t in that span was when he was pulled after just 2/3 of an inning while giving up 10 runs. If that happens again, the Cardinals aren’t winning anyway. If he pitches a full game, which we’ll need for the Cardinals to cover this, he’s got a great chance of cashing this. The Cubs are top ten in the league in strikeouts, and getting +142 has a lot of value. Outside of that one disastrous outing against the Dodgers, Martinez hasn’t been half-bad this year.