As we enter the home stretch of the MLB season, there are many intriguing storylines worth following. The Atlanta Braves and San Francisco Giants are both hanging onto slim leads in their respective divisions, and they will conclude a 3-game series this afternoon at Oracle Park. It should be a fascinating matchup, so why not sweeten the pot with a same game parlay? I’ve got a 3-leg parlay in mind, and it’s paying out north of 8/1 odds.

Along with this article, you should definitely check out all of our MLB plays for the day.  You can also follow me on Twitter for any added plays.

The Braves are hanging onto a 1.0-game lead over the Phillies in the National League East. They have lost 4 games in a row, including the first 2 of this series. Their sense of urgency should be high. The good news for Atlanta is that Max Fried will be on the mound. Since returning from a brief stint on the injured list, Fried owns a 2.80 ERA and a 3.27 FIP in his last 22 turns through the rotation. He’s been even better since the beginning of August with a 1.94 ERA and a 2.79 FIP. He is pitching with a lot of confidence right, and he should be able to put the Braves is a good spot. Anthony DeSclafani takes the mound for the Giants. The Braves were able to push 3 runs across on 6 hits in just 3.0 innings against DeSclafani a few weeks ago on August 29.  That should give the Atlanta bats some confidence as well.

DeSclafani has turned into a league-average pitcher in the second half of the campaign. After being shut out yesterday, Atlanta’s bats should be poised to have a much better day at the plate in the series finale. Atlanta was able to score 9 runs in their last game against DeSclafani. At first pitch today, the temperature is forecasted to be in the 60s with a strong wind blowing out towards center field. Both of these offenses rank in the top 12 of the league in OPS and in the top 8 in ISO over the last 14 days of action. This is a fairly attainable total.

If the Atlanta offense is clicking, that most likely means that Freddie Freeman is involved. Freeman is seeing the ball well right now. He is 3-for-9 (.333) so far in this series, and he is on an 8-game hitting streak. He has 5 multi-hit games during that stretch. Freeman has also hit DeSclafani hard in his career. The Atlanta first baseman owns a .364 career batting average against the San Francisco right-hander, and he has blasted a pair of home runs. With the way he is rolling right now, I like Freeman’s chances to stay hot this afternoon. 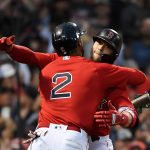