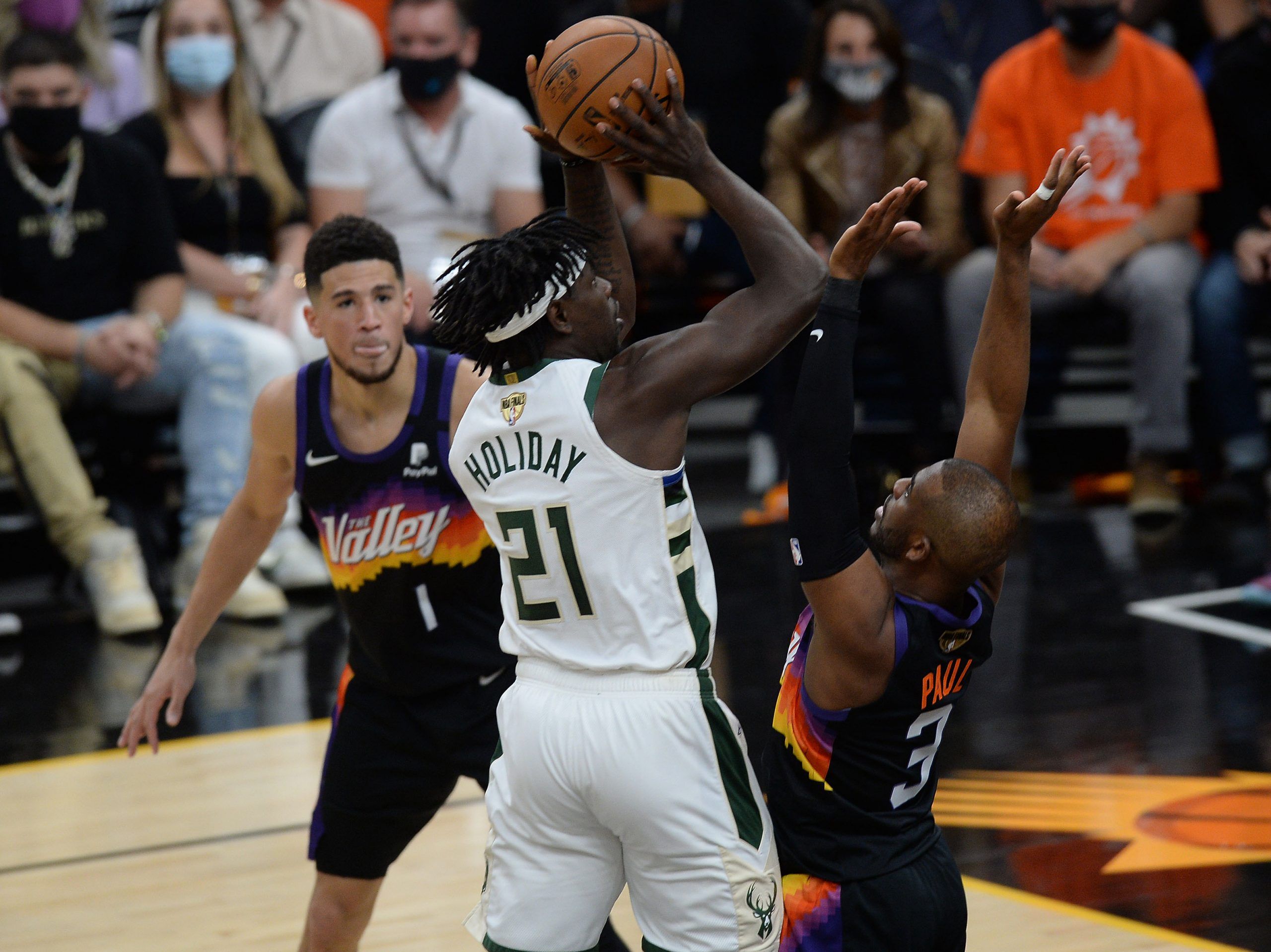 I'm an editor here at Pickswise who was raised in a household full of sports fanatics. Since I unfortunately never had LeBron James' jumping ability I wasn't able to make it to the NBA, and chose writing about sports as the next best thing. An avid sports bettor myself, I'm excited to get to write about the industry as it gets set to take off across the country. Buckle up.
Updated: 10:19 AM ET July 14, 2021

The NBA finals are back, and the Milwaukee Bucks are riding high after their Game 3 win over the Phoenix Suns. Milwaukee can now even the series at 2-2 on Wednesday with a win in Game 4. Will Devin Booker bounce back from his dreadful shooting night, or will Giannis Antetokounmpo keep it rolling?

Here at Pickswise we have tons of great content for the finals, including same game parlays and picks on the side and total for every matchup. But right now we’re going to talk about one of my favorite props: first-basket bets. Let’s dive into my best such bet for Wednesday, where we’re counting on Jrue Holiday. We also have a long-shot play at the end.

It’s not really a question as to who is going to take the first shot. The Bucks and Suns have now played five times this season, and Milwaukee has started with the ball each time. For whatever reason, Brook Lopez is aggressively going all-out for these jump balls. Deandre Ayton is content to let him have them.

As such, I think we’ve got to look at a Bucks player first. Of those, Holiday makes the most sense. I’ve had some success betting him recently, including when I cashed while picking him in Game 6 of their series against the Hawks. I also picked him in Game 2 of this series, and I was correct about him taking the first shot although unfortunately he missed it.

I picked Khris Middleton in Game 3, and again I was correct about him taking the first shot. Again, he unfortunately missed it. Holiday ended up scoring the first bucket of Game 3 when he sank a three-pointer.

Holiday was at +550 earlier in this series, and has continued to take a ton of shots early in games, yet his odds have actually gone up to +600. That makes no sense. He had off shooting nights in the first couple of games but was hot in Game 3, and made five shots from beyond the arc.

The team will likely look to keep that positive momentum going. Antetokounmpo is +380, and there’s no way I’d touch that. He doesn’t actually take the team’s first shot all that often, and less than 4/1 with just about anybody is a no-go for me.

You get the picture. That was five games in a row against Atlanta where Holiday was consistently getting the first shot or first basket. He’s kept it going in the finals so far.

If you’re looking for a play with juicier odds, Crowder makes the most sense. He took the team’s first shot in Game 3, and often gets looks early in the first quarter. There was a stretch in the first couple rounds where he was getting the first shot up every other night. Crowder also made six threes in Game 3 and was one of the team’s lone bright spots, so it makes sense that they’d look to keep feeding him.