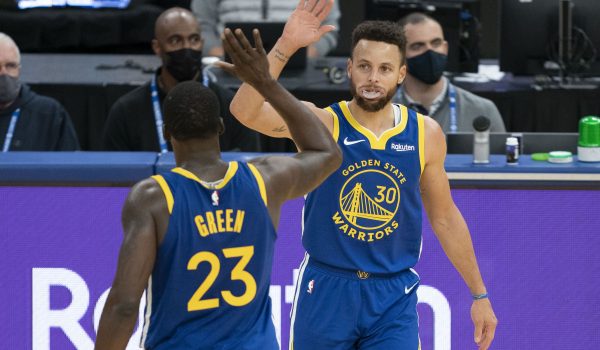 After a fun and exciting 10-game NBA Sunday, the association continues with 18 more teams hitting the hardwood!

We have a ESPN double-header this evening, East contenders Philadelphia 76ers visit Dallas and square off with the Mavericks at 7.30pm ET.

Our same-game parlay focuses on the other Nationally televised game, it’s the Golden State Warriors hosting the Denver Nuggets at Chase Center, live on ESPN at 10pm ET!

We also have picks on the side and total for each NBA game this Monday!

The Nuggets are playing their second game in two nights after suffering a tough loss at home in front of a national TV audience against the Boston Celtics last night. The fourth quarter of that game was Denver’s worst this season, they recorded only eight points and ended up losing the game by 18 points. Warriors like playing them at home, they’ve gone 8-2 in the last 10 meetings there. They are also doing well in Monday games this season winning five of their last seven. Momentum is also on Golden State’s side here as they’ve won two of their last three games at home, they will want to end this four-game home stand on a high before hitting the road for the next five games.

This being a home game for the Warriors, you just know Steph will go off here. He has already had one big game against the Nuggets this season where he exploded for 35 points and shot 60 percent from the field, including 45.5 percent from deep. He averages more points at home than on the road, his shooting efficiency is up almost four percent from the field and almost eight percent from three at home. He is averaging 36 points over his last six games on above 50 percent shooting, facing four play-off bound teams during the span. Kelly Oubre Jr. will also not play for the Warriors, he is their fourth leading scorer. Curry is only 18 point behind Wilt Chamberlain for the all-time point total as a Warrior player, you can bet on him wanting to have a big performances and break that record in style.

Green leads the Warriors both in assists and rebounds, he is coming off a seven rebound game against the Houston Rockets. With James Wiseman now being injured and lost for the season most likely, there will be an extra 5.8 rebounds for the rest of the Warriors to collect during games as that’s what Wiseman has averaged. Green is always up for that challenge and going up against a rebounding machine like Nikola Jokic, he will be itching to collect as many boards as possible. Warriors are also second in pace this season, Denver can certainly follow that, so we can expect a ton of shots going up here which means extra rebounds for everyone.

With Wiseman and Oubre Jr. out, the Warriors depth has taken a bit of a hit as the two of them account for 26.8 points per game. That’s good news for Andrew Wiggins who will pick up the slack with those two out. He is already the team’s second leading scorer behind Curry and is coming off a 25-point performance against the Houston Rockets where he put up a total of 21 shots making 11 of them. He has improved his scoring by 3.5 points since the All-Star break and over the last 10 games his average has gone up to 19.3 points. In wins he is averaging 19.7 points per game, he and Curry will carry the Golden State offense for the foreseeable future.