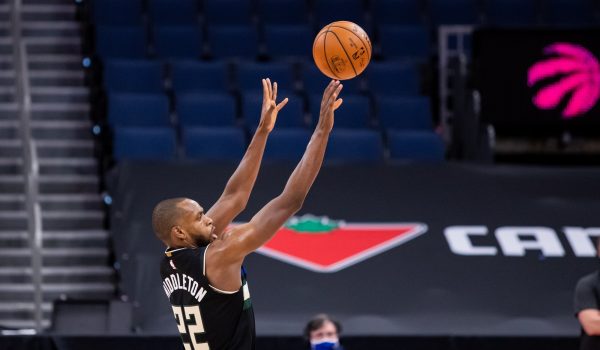 The NBA playoffs are officially in full swing, and it’s been hard to complain about the action we’ve seen so far. There have been plenty of thrills, and we’ve got another great two-game slate on Sunday as the Brooklyn Nets and Milwaukee Bucks meet for a pivotal Game 4 while the Phoenix Suns try to close out the Denver Nuggets with a sweep. It’s a lot to unpack, and there are a plethora of wagers to make.

We’ve got tons of great content for the playoffs, including same game parlays, mega parlays, and picks on the side and total for every single matchup. But right now we’re going to talk about one of my favorite props, first-basket bets. Let’s dive into my favorite two plays for Saturday.

The Bucks and Nets have now played each other six times this season. Milwaukee center Brook Lopez has won the opening tip and the Bucks have started with the ball in all six of those games. That’s a relatively large sample size, and hard to write off as a fluke at this point.

As such, it would be hard for me to take a Brooklyn player here, especially with this game being in Milwaukee. Giannia Antetokounmpo has the lowest odds, but I think the Bucks’ other star makes the most sense. Give me Khris Middleton to strike first.

He was on fire in Game 3, leading the team with 35 points and taking 25 shots. He should look to keep that momentum going early here.

Be sure to check out our full game preview for Brooklyn Nets vs. Milwaukee Bucks

At this price, Ayton is too good to pass up. The Suns and Nuggets have played six times as well, and Phoenix has started with ball in five of those games. Yet if you look at all the odds for this prop, oddsmakers seem to be treating this jump-ball as a 50/50 proposition.

Devin Booker has the chalkiest odds, but he hasn’t actually been regularly taking the first shot. Phoenix has been usually getting their secondary players involved right off the bat. Ayton has already scored the night’s first basket twice in three games in this series so far.

He should be considered a heavy favorite to win the tip over Nikola Jokic, and the Suns know when Ayton is scoring it takes their offense to a new level. In Game 3 he attempted the game’s first shot, missed it, but still cashed the first basket prop because he took Phoenix’s second attempt on their next possession as well.

Just for fun, I’ll be sprinkling a few bucks on a parlay of both of these. It’ll pay out north of 54/1 at FanDuel Sportsbook. It’s the playoffs, why not celebrate by going for the jackpot?