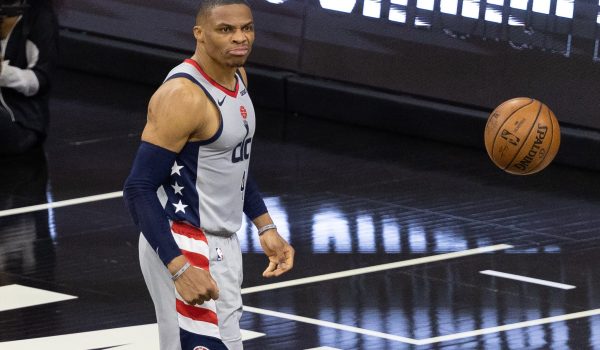 How quickly things can change in this league. The Wizards were 3-0 down in the series and looking lost without hope as Embiid was torching them in the paint. One sore knee later, the score is 3-1 and the Wizards have a chance to extend this series further with the 76ers leader potentially sitting. No team has ever come back from 3-0 down to win the series in the NBA, but with Russell Westbrook in the lineup, it is hard to expect the Wizards to go away quietly.

This game should be a thriller, and we’ve boosted the excitement by putting together a massive +1648 same game parlay. Don’t forget to also check out our picks on the side and total for each of tonight’s matchups.

Alarms have gone off in Philly after Embiid’s injury in Game 4. After leading by as many as 11 points in the first half, they just looked deflated after he went down. Tobias Harris tried to step up once again and finished with 21 points and 13 rebounds, but the Sixers just ran out of juice without their center. His status for tonight is uncertain — the team has listed him as questionable with a right knee injury. If he is unable to go, Philadelphia could be in trouble. They are the better team on paper, but they rely so much on Embiid. During the regular season, they went 9-10 without him in their line-up.

There would also be a major psychological shift in the series as the Wizards should regain belief that they are still alive in this one. Look for them to get the job done here.

The Philadelphia 76ers have a big hole to fill in the middle of the paint. Washington took advantage of that and managed to put up 122 points in Game 4. If Embiid is unable to play we can expect the Sixers to run a bit more as that’s normally what they’ve done in regular-season games without their big man. Betting on points in Washington games has been highly profitable as of late. Ten of their last 15 games have cashed, including three of the four games in this series. The teams are averaging 232.2 points, which is a couple of points over the total for tonight. With the offense now in the hands of Simmons, the 76ers should be able to speed the tempo of this game up. After all, they will not have to slow down the pace and wait for Embiid to establish position in the post. All of this should help this over to clear.

Ben Simmons has been able to record eight or more assists tonight in three of the four games so far in the series and is currently averaging 9.5 per contest. With Embiid doubtful for tonight’s game, look for Simmons to have a large role offensively, with his usage set to increase.

If Embiid is not going to play tonight it should mean Dwight Howard gets more minutes. Howard is not the floor spacer that Embiid is so Simmons is likely to get more resistance at the rim on his drives to the basket, which in turn could lead to more dump-off opportunities and assists. Howard is a terrific lob threat too and could prove to be an easy target for Simmons when passing from the post. The 76ers will need their all-star to step up tonight, and I expect he will be flirting with a triple-double once the final horn sounds.

Another player that could benefit from Embiid missing this game is Russell Westbrook. Embiid is undoubtedly one of the best defensive big men in the league which has impacted Westbrooks’s ability to score in the paint. It may also be a factor as to why he has been taking more mid-range jumpers throughout this series, as he looks to stay away from Embiid. He has struggled for efficiency with those, which lead to a three from 19 shooting night in the last game.

He still managed to score 19 points on the night, and with a potentially easier time underneath the basket tonight, look for him to clear this total and score at least 24 points. The Wizards have a chance to take the series back to Washington for game six, so expect Westbrook to come out with a great deal of intensity.