The defending NBA champion Milwaukee Bucks will go on the road to face the Indiana Pacers on Monday night. Milwaukee is off to a 2-1 start, while Indiana bounced back from two losses for a win in its home opener against Miami this past weekend. Let’s take a look at the best same game parlay option for Bucks vs Pacers, and also be sure to check out our full game preview for picks on the side and total.

Part of the value in same game parlays, of course, is that all of its components can be correlated if you so choose. That is the entire plan here, as Domantas Sabonis pouring in a bunch of points and Malcolm Brogdon raining a few threes would obviously work well with an Indiana win. Let’s break down each of the legs one by one.

Three games into the season, the Bucks’ play has been all over the place. They looked sharp in their opening win over Brooklyn, but they were the opposite of that their next time out against Miami. Part of the problem is a long list of injuries. Big men Brook Lopez and Bobby Portis are out, while point guard Jrue Holiday is doubtful for Monday. That is the reason why Indiana is only a very small underdog and it opens the door to an upset. The Pacers are also not at full strength on the wing with Caris LeVert and TJ Warren out, but inside the combo of Myles Turner and Domantas Sabonis is extremely productive. Also, missing LeVert and Warren is nothing new for them; that is normal. Indy is 1-0 at home so far this season and it could be 2-0 by the end of the night.

Sabonis is one of the most versatile big men in the business, with an impressive mid-range game to go along with his low-post moves. Since Lopez and Portis are out, Giannis Antetokounmpo will have to man the paint on defense for Milwaukee. That will leave mid-range jumpers open for Sabonis, and if he is knocking them down he should exceed this number. The left-hander from Lithuania is averaging 26.0 points per game, so asking him to reach the 25 mark against a depleted opponent certainly isn’t too much.

Holiday’s absence will also hamper Milwaukee’s perimeter defense in a major way. The Bucks are already 22nd in the NBA in 3-pointers allowed per game (14) and opponents’ 3-point percentage (39.6). Brogdon is averaging 7 3-point attempts per contest so far in 2021-22 and he shot better than 38% from downtown last season. Three successful long-distance dials seems well within reason in this particular matchup. 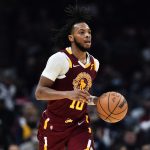