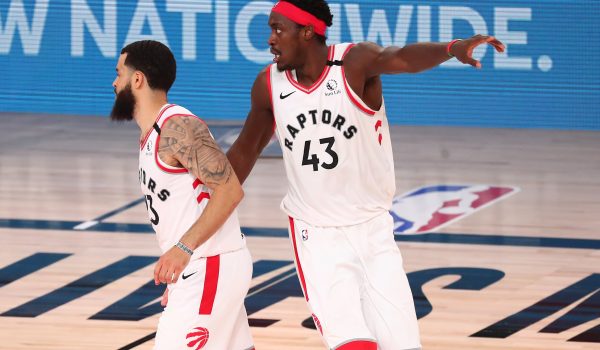 The weekend is here, so why not celebrate by going for a big payday? That’s right, we’re back with another NBA mega parlay, this time a three-teamer with a payout north of 12/1 where we’re counting on the Raptors to pull off an upset. We’ve been rolling recently with a bunch of recent parlay cashes, including our MLB mega parlay on Tuesday, so why not follow it up with even more winners on Saturday?

Keeping it simple with three money line underdogs. Let’s break down each of the three legs one by one.

The Wizards have been a nice story, but I think now is the time to fade the hype. Sell high at the top of Washington’s market. When you dig into their recent performances, it isn’t as impressive as it’s looked on first glance. Their last five wins have come against the Raptors (in overtime), the Pacers, the Cavaliers twice, and the Lakers (currently in free-fall). Indiana is coming off an impressive win over the Hawks, and shouldn’t be forgotten about. Their offense is clicking, and they’ve scored at least 133 points in three of their past four games. They just lost to the Wizards 154-141, but that was an outlier shooting game from both sides so I’m not drawing too many conclusions from it. Take the value with the home underdog here.

The Raptors are only 6-6 in their last 12 games, but that doesn’t tell the full story. Those six losses? They came against the Wizards (in overtime), Clippers, Jazz, Nuggets, Nets, and Knicks. Some of the best and hottest teams in the league. You can’t really hold any of them against the Raptors. A couple of those games were really close, like when they lost to the Clippers by five or Jazz by four. Overall, the Raptors have been playing a lot better over the past month. Now that they’re finally back at home and through that scheduling gauntlet, expect them to close strong. The Grizzlies are just 2-5 in their last seven games, and the two wins in that span were against the Timberwolves and Magic. They only beat Minnesota by four, and scored only 92 points in the win over Orlando. This isn’t a team to be afraid of right now.

The Nuggets should have no trouble winning this one. It’s tough for any team to come into Denver and play at altitude, and both of these teams have stark home/road splits. Brooklyn is 25-8 at home this season, but just 18-16 on the road. The Nuggets are 19-12 on the road, but 25-10 at home. Oddsmakers aren’t accounting enough for the Nuggets’ home court advantage, and I don’t see why they should be underdogs. Denver has been one of the league’s best teams over the past month, and they’re 10-3 in their last 13. The Nets are still without James Harden, and they have flat out stunk lately. Brooklyn has lost four games in a row entering this one, so there’s no way I could back them here in this tough environment.

Be sure to check out our full game preview for Brooklyn Nets vs. Denver Nuggets.