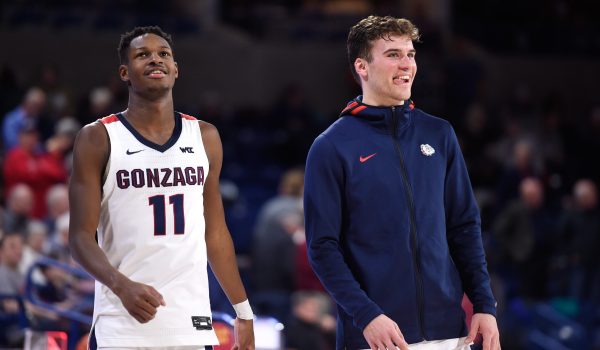 If it feels like basketball season just ended, well…that’s because it did! The NBA Finals wrapped up on Oct. 11, when LeBron James and the Los Angeles finished off the Miami Heat. Little more than a month later, basketball is once again stealing headlines from the rest of the sports world. The NBA Draft took place last Wednesday, free agency got off to a wild start this past weekend, and now the 2020-21 college basketball campaign tips off this week.

What’s in store on the college hardwood over the next four-plus months? Like in all sports, it’s tough to expect anything. But let’s take a look at what might transpire from now through March.

What to expect in an unexpected year

The bad news is that coronavirus cancellations are already wreaking havoc on college basketball…and the season hasn’t even started yet! That being said, it’s not all bad news. Football is still powering through it all, three months into its season, which gives at least some hope for hoops. Contingency plans are already being made for the 2021 NCAA Tournament to happen…in some shape or form. Any kind of Big Dance would obviously be an upgrade over 2020!

All other things being equal, this is shaping up to be another entertaining, wide-open year in college basketball. The one-and-done era continues to make for a ton of turnover, no sustained dominance of any kind, and the lack of a clear-cut favorite. No team has better than +700 odds to win the National Championship. Traditional powers such as Villanova, Kentucky, Virginia, Kansas, Duke, and Michigan State are in the mix, although this could be the year for someone like Gonzaga, Creighton, or San Diego State to crash the party.

There is plenty of individual star power with a nice mix of veterans and freshmen. Iowa senior Luka Garza is a +400 favorite to win the Wooden Award. Yes, folks, a senior may be the best player in college basketball. We also have diaper dandies such as Oklahoma State’s Cade Cunningham, USC’s Evan Mobley, and Kentucky’s B.J. Boston, among many others.

Is the craziness of 2020 (and soon-to-be 2021) just the recipe needed for a mid-major representative to win it all? Gonzaga may have its own recipe, in fact. The Zags have won at least 30 games in four consecutive seasons and head coach Mark Few brings back Corey Kispert and Joel Ayayi.

The Bears are No. 1 in the Coaches Poll, bumping Gonzaga down to No. 2 on that list. They also found themselves in the top spot on multiple occasions last year and return their top three scorers (including Jared Butler) in addition to defensive stopper Mark Vital.

Also No. 3 in the Coaches Poll, the Wildcats have won two of the last four national titles. They probably wouldn’t have won it in 2020, but they appear to be back in the serious picture for 2021. In fact, head coach Jay Wright’s squad is the favorite. Saddiq Bey is gone, but everyone else is back.

The Cavaliers are still the reigning champions, having made an incredible run through March Madness to lift the trophy in 2019—one year after becoming the first No. 1 seed to lose to a 16. They will be led by point guard Kihei Clark and Marquette transfer Sam Hauser. Virginia is also No. 4 in the Coaches Poll.

Garza decided to return for his senior season and four other part-time or full-time starters are also back. Jordan Bohannon is eligible following a redshirt year, too. There is quite simply a lot to like about these Hawkeyes. It is worth noting that Iowa and Kansas flip-flop in the Coaches Poll (the Jayhawks are sixth in the AP, while they are fifth in the Coaches and Iowa is sixth).

For obvious reasons, I would not touch any favorites on short odds. Yes, the Lakers captured the NBA title and Los Angeles Dodgers won the World Series. They were hot favorites to triumph in their respective leagues. Still, the coronavirus clearly has a bigger impact on non-bubble situations. We have seen it throughout the college football season and we are already seeing it in college basketball. This is going to be wild NCAA hoops season. Who knows where and how the NCAA Tournament will happen? Who knows which teams will be wrecked by coronavirus outbreaks and which teams will go unscathed? Who knows which players will opt out in the middle of the season and get ready for the NBA?

In the face of turmoil, you have to like rock-solid coaches such as Duke’s Mike Krzyzewski and Michigan State’s Tom Izzo. Although they don’t have their most loaded teams on paper, they aren’t exactly lacking. The Blue Devils bring back Matthew Hurt and Wendell Moore to go along with another ridiculous recruiting class. Former Spartans Cassius Winston and Xavier Tillman are now in the NBA, but Izzo never rebuilds—he just reloads. Duke at +1300 and MSU at +1500 are intriguing plays.

At the same time, things could get a little crazy this season. So if you’re looking for more of a surprise, Illinois could be the way to go. The Fighting Illini have similar odds (+1300) to Duke and Michigan State, but it is far from a traditional powerhouse; in fact, they haven’t even made the NCAA Tournament since 2013. Illinois’ two-headed monster featuring Ayo Dosunmu and Kofi Cockburn could get things turned around in a hurry.

College Basketball 2 months ago
March Madness by the numbers: The under dominates the tournament

College Basketball 2 months ago
Daily March Madness public money update: Bettors moving to the over for Baylor vs. Gonzaga