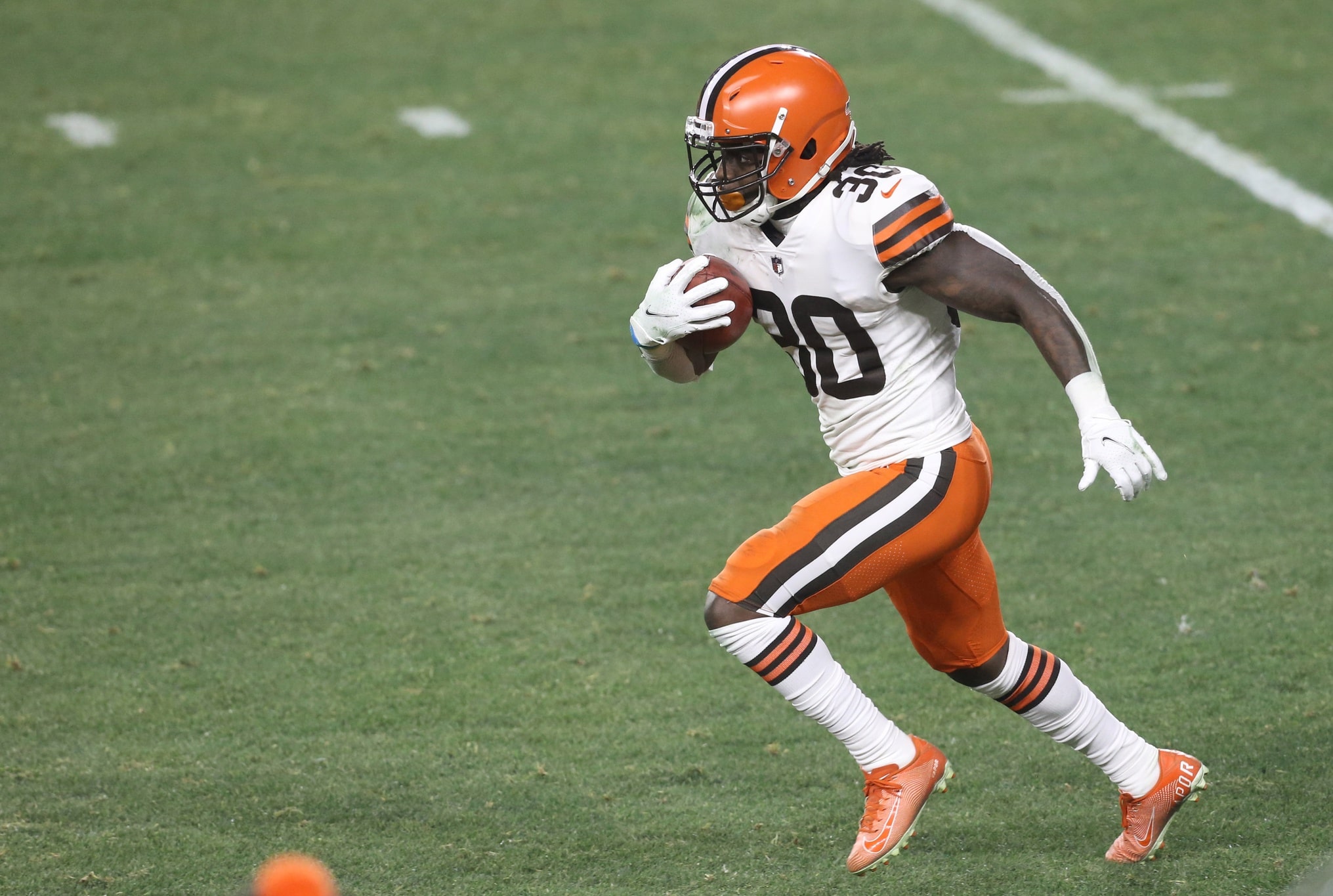 When it comes to DFS Showdown slates, even the ugly games count. And wow, does this game between the Denver Broncos and Cleveland Browns have ugly written all over it. The Browns are without Baker Mayfield, Nick Chubb and Kareem Hunt for starters. They may also be without Odell Beckham, their offensive line is banged-up and anyone waiting on Jarvis Landry to return may have to wait a little longer as the veteran wideout is a true game-time decision.

On the other side, the Broncos may be healthy, but they’ve been a veritable nightmare lately as head coach Vic Fangio and offensive coordinator Pat Shurmur seem way in over their heads and are getting out-coached every step of the way.

But that’s life in the NFL and even with a game total of 41.5, there will still be some points scored for daily fantasy football. There may not be a lot, but enough to cash some tickets for those willing to put some lineups in. Here’s a look at the plays we like for Thursday Night Football.

On paper, the Browns’ cover-corners look great, but in reality, they’ve struggled against the opposing #1 receiver, ranking 26th in DVOA and allowing an average of 99 receiving yards per game. Sutton has averaged 107 yards and one touchdown over his last two games and should build off that tonight.

Despite the injuries, the Browns are still a run-first team and Johnson is expected to shoulder the load tonight against a run defense that may not give up a whole lot of yards, but rank 20th in DVOA against the run and have allowed five rushing touchdowns on the year.

The Browns are in desperate need of a win in this game and if they have to turn to the pass, they will. Keenum is more than capable of running this pass attack, especially if the Browns can establish the run and allow play-action to open up. We’ve seen head coach Kevin Stefanski turn more to the pass at times and this game could very well be one of them.

Don’t forget to read our same game parlay for Broncos vs Browns (+1450 odds!)

With the likelihood that Odell Beckham sits and Jarvis Landry, recently activated off injured reserve, being a game-time decision, Peoples-Jones slots in as the Browns’ top receiver. He matches up well against the Broncos corners and showed everyone last week that he can be a force on the field.

The rest of the world stays on Javonte Williams in search of a breakout, but Gordon does not carry an injury designation into tonight’s action and remains the lead back. Their split on carries has been close to 50/50, but Gordon is still the lead and he sees more work inside the red zone which is key for Showdown slates. It’s not a great match-up, but the Broncos have to try to establish the run.

If the running game isn’t clicking, Denver will take it to the air and have Bridgewater looking for his receivers downfield. Keep in mind, he does have a foot issue so there is some risk, but it doesn’t sound like it will keep him out of the game. If you believe in the Browns’ run defense, then using Bridgewater could be the play you want.

Should the Browns fall behind in this game which, given their pass defense, could be a distinct possibility, then Felton could be in-play even more. The former UCLA scat-back is expected to see the third-down, pass-catching work and could be a check-down machine for Keenum.

The Browns’ run defense is their strong suit, so that could push the Broncos into a heavier aerial attack. Patrick runs clean routes and has proven to be very reliable. He got back into the end zone last week and has three touchdowns on the year. If leaned on, he could grab his fourth.

With the receivers being banged up, the Browns will likely incorporate their tight ends a lot more into the passing game. Expect a lot of 12-personnel formation which puts two tight ends on the field and while Austin Hooper sees more snaps overall, Njoku has the same number or targets and does more route-running as Hooper stays tethered to the line.

Whenever there is a change at quarterback, fantasy owners search for the receiver the new guy will jell with the most. That could be Higgins who has worked with Keenum the most at practice. He is the definition of a dart-throw, but one we are ready to use.

Find out our best touchdown scorer bets for TNF, including a 1st TD scorer pick at 13/1!