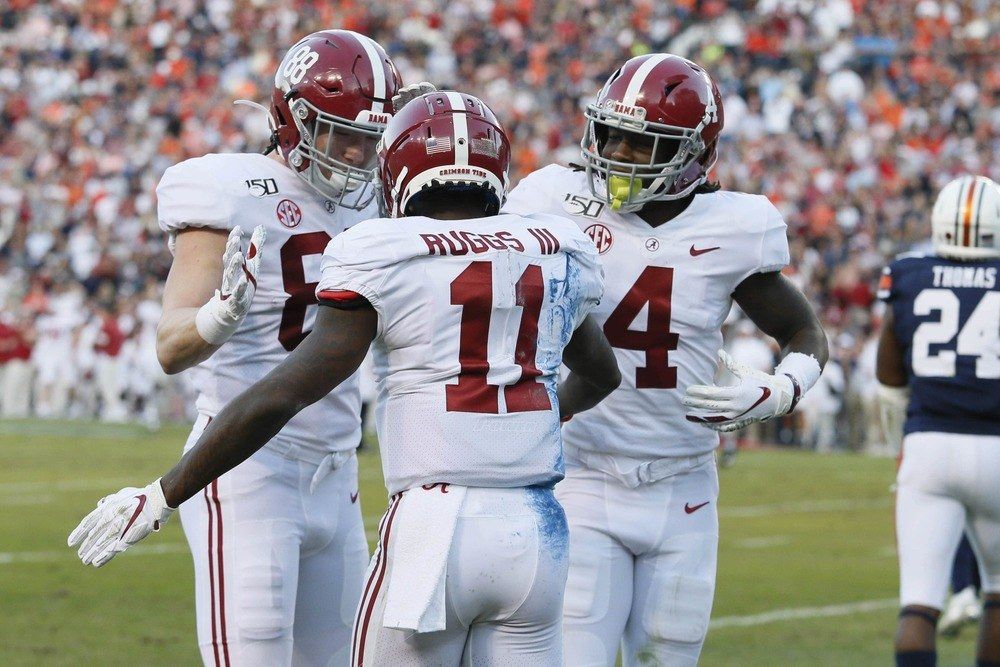 I'm an editor here at Pickswise who was raised in a household full of sports fanatics. Since I unfortunately never had LeBron James' jumping ability I wasn't able to make it to the NBA, and chose writing about sports as the next best thing. An avid sports bettor myself, I'm excited to get to write about the industry as it gets set to take off across the country. Buckle up.
Updated: 11:13 AM ET September 02, 2020

The start of the 2020 NFL season is right around the corner, and we’ll be bringing you loads of content in the run-up to Week 1. It’s been a great couple of years for receiver talent in the league, and today we’ll be breaking down the best wide receivers poised to breakout this fall. These NFL sleeper picks will help with all fantasy football drafts.

Ruggs was a late riser during draft season. Jerry Jeudy and CeeDee Lamb received most of the media attention for months, until Ruggs started shooting up draft boards. Jon Gruden drafted him with the 12th overall pick, and the depth chart ahead of him indicates he’ll get plenty of opportunities as a rookie.

Tyrell Williams is a nice piece but isn’t anyone’s idea of a number one receiver, and Hunter Renfrow is more of a slot guy. There’s a reason why scouts fell in love with Ruggs, as he has the rare combination of elite speed and route-running ability. I think he’s going to be Derek Carr’s top option before too long, and he should make a splash immediately in Vegas.

Sanders might’ve just turned 33 in March, but he showed last season that he’s still capable of playing at a very high level. Now playing in New Orleans, I think he’ll be the best we’ve seen him since his glory days with Peyton Manning in Denver. He’s been with mostly subpar quarterbacks since, and will now be catching his passes from another Hall of Famer in Drew Brees.

Sanders’ age may give some pause, but he hasn’t really lost much speed or athleticism. The Saints had Michael Thomas and virtually no other pass-catchers last season, with a rotating cast of former undrafted guys as their secondary options. With Thomas commanding so much attention from opposing defenses, Sanders should be able to thrive.

The Cardinals pulled off a coup this offseason, acquiring DeAndre Hopkins from the Texans for relative peanuts. The trade should help the team a ton overall, but I think it’ll boost Kirk as well. Defenses will now be keyed in on Hopkins, which will allow the third-year pro to thrive.

He spent last season developing chemistry with Kyler Murray and learning new coach Kliff Kingsbury’s system, and still managed to put up a respectable line. Now in his second year with each, he should take a big jump. Kingsbury comes from the Air Raid college system, so he’s going to let Murray throw it enough for everybody to eat. Don’t worry about there being too many cooks in the kitchen with this receiver group.

The pride of Toledo had a heck of a rookie season, as it isn’t too often that third-round receivers make such an impact right away. He really started to come on strong late in the year, with at least 60 yards in each of the Steelers’ last four games, so he’s got a lot of momentum heading into this campaign.

Perhaps most impressive of all, Johnson was able to have his eyebrow-raising rookie season with Devlin Hodges and Mason Rudolph under center. Now that he should get a full season with Ben Roethlisberger as his quarterback, I don’t see anyway he doesn’t take a major sophomore leap.

Perriman’s NFL career didn’t get off to the start that he envisioned. The former first-round pick flamed out in Baltimore, and was quickly labeled a bust. He revived his career a bit with the Browns in 2018, and made some more noise with Tampa last year. His numbers weren’t eye-popping, but they’re pretty impressive considering the circumstances.

Perriman was buried behind Mike Evans and Chris Godwin on the depth chart, and he’ll have nowhere near that competition after signing a contract with the Jets. New York has virtually no receivers, and Perriman has a great chance to become Sam Darnold’s most reliable option. He was absolutely on fire to finish the year, with at least 102 yards in each of his last three games.