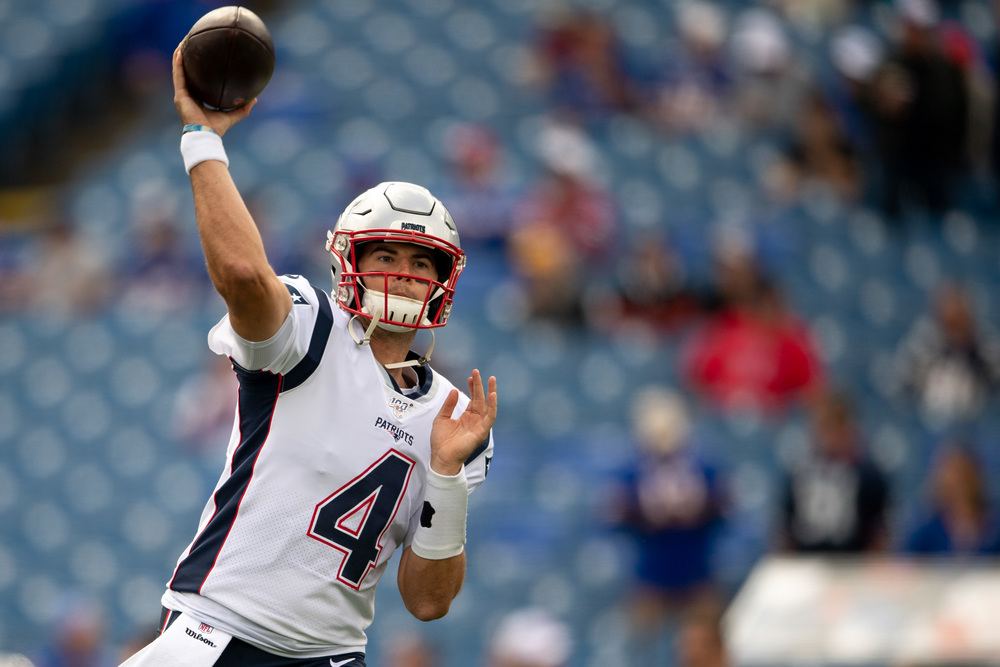 The Patriots replacement for Tom Brady is…Brian Hoyer? The veteran signed with New England on Sunday, making this his third stint with the organization.

Barring some unforeseen move, Hoyer isn’t going to suddenly jump to the top of the depth chart. Rather, that role is expected to go to second-year QB Jarrett Stidham.

Indeed, NFL.com’s Ian Rapoport says “this is probably it at the position,” meaning the Patriots will be rolling with a Stidham/Hoyer duo in 2020 (of course, the team is also rostering Cody Kessler, and they could always add a rookie… but let’s assume these third QBs are irrelevant in 2020).

We’re not going to dive too deep into the Hoyer signing. The Patriots have continually shown that they value the veteran’s presence, as his familiarity with opposing teams makes him an ideal scout-team quarterback. Further, his experience could be especially helpful with a second-year quarterback at the helm.

Rather, this signing is notable because it means the organization is fully committed to Stidham in 2020.

So with Tom Brady in Tampa, who will start at QB for the Patriots in Week 1 of the NFL season?

Jarrett Stidham is the current favourite with one sportsbook!

Who would you start? 🤔#NFL #PatsNation pic.twitter.com/RnL2NkCEXH

As we’re sure many of you are asking: whom???

The highly-touted quarterback out of Texas spent his first two collegiate seasons at Baylor, where he mostly served as a backup to Seth Russell. While Stidham played well during his freshman campaign, there was no clear path to a starting gig. After some transfer logistics (which resulted in him missing the 2016 campaign), Stidham joined Auburn for the 2017 season.

The 6-foot-3, 200-pound signal-caller proved to the perfect game manager during his first season at Auburn. Stidham connected on 66.5-percent of his passes for 3,158 yards, 18 touchdowns, and only six interceptions, leading to First-Team All-SEC honors. More impressively, Stidham helped lead Auburn to incredible victories over both Georgia and Alabama.

Following that performance, there were rumblings that Stidham could have been selected in the first round of the 2018 draft. While he was clearly behind the likes of Baker Mayfield, Sam Darnold, Josh Allen, and Josh Rosen, many pundits ranked him ahead of Lamar Jackson and Mason Rudolph.

Instead, Stidham decided to stay at Auburn for one more season, but he disappointed during his junior campaign. While he still threw 18 touchdowns and reduced his interceptions (to five), he saw drops in completion percentage (60.7) and passing yards (2,794).

As a result, Stidham fell all the way to the fourth round of the 2019 Draft, and he was the seventh quarterback off the board.

Predictably, he didn’t play a whole lot behind Brady during his rookie campaign. He had an extended look during the preseason, where he completed 67.8-percent of his passes for 731, four touchdowns, and one pick (he also added 88 rushing yards on 17 carries). He only got into three regular season games, including a showing against the Jets where he threw a pick-six.

While fans were naturally mixed on Stidham’s rookie campaign, it sounds like the Patriots were thrilled with their selection. Doug Kyed of NESN.com reported that the organization liked the quarterback “as much as a team can after Year 1.”

Bill Belichick, who’s never eager to hand out praise, seems to have a similar sentiment.

“Jarrett is a smart kid,” Belichick said. “He picks things up very quickly. He has a good grasp of the offense given where he is in his career. He’s handled everything we’ve thrown at him. In practice, he does a good job. He gets a lot of passes on our defense and when he has the opportunity to get the offensive snaps, he’s prepared and does a good job of those. But you know, it’s always different in the game. I think he’s doing all he can do.”

It seems like some pundits are having a difficult time wrapping their head around the fact that the Patriots will replace a future Hall of Famer with a second-year player.

That seems to be the reality, however… and it sounds like the organization is ready for the challenge.