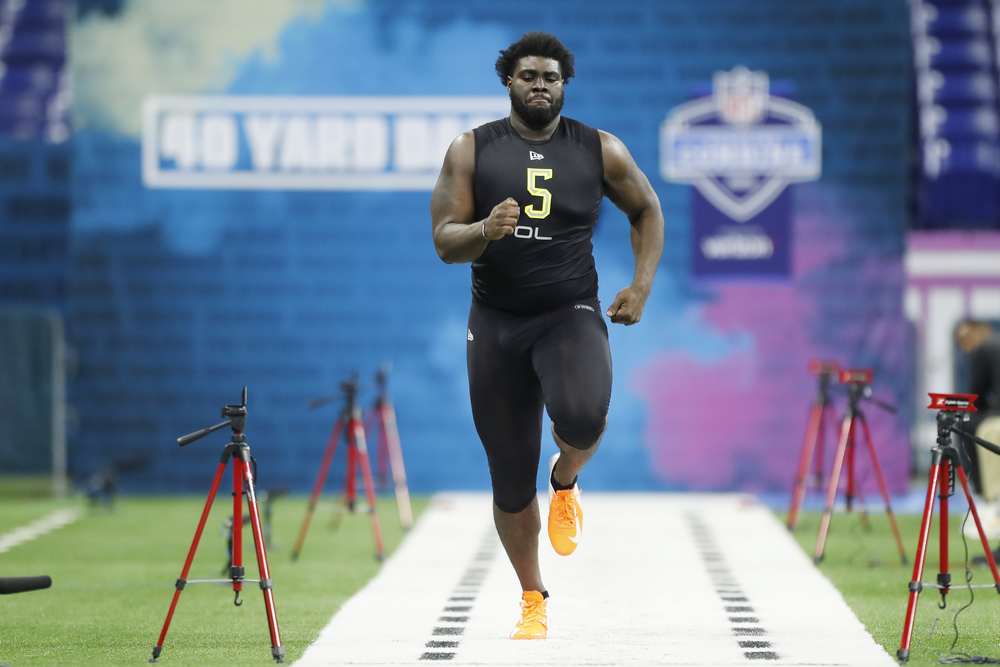 With the 2020 NFL Draft a little more than a month away, it’s time to produce our first mock. Joe Burrow obviously looks like a lock to go No. 1 to the Cincinnati Bengals and Chase Young is almost certain to be selected by the Washington Redskins in the second spot. But at some point things are going to get crazy, as they do every year. Could that happen as early as the No. 3 pick?

Let’s take a look at the possibilities, starting with the top 10 and working under the assumption—for the sake of avoiding chaos—that there won’t be any trades.

Nobody really wants to play for the Bengals, but at the same time anyone who is worthy of being the No. 1 pick should have enough confidence that he is capable of turning a franchise around sooner rather than later. Burrow, the Heisman Trophy winner, is that guy.

The Redskins are not desperate for a quarterback since they picked Dwayne Haskins 15th overall in the 2019 draft. Thus they are free to select Young, Haskins’ former Ohio State teammate. Young has the potential to make the same kind of instant impact that Nick Bosa had on the San Francisco 49ers’ defense.

Detroit needs help basically everywhere on defense. If the best player available is the choice, it is arguably Simmons. The former Clemson linebacker was dominant at times for the Tigers and he was even more impressive at the combine. Ohio State cornerback Jeff Okudah is also a possibility.

More than a few offensive linemen went nuts at the combine, thus giving New York plenty of options at this spot. The Giants have the skill guys in running back Saquon Barkley and quarterback Daniel Jones. Now those guys need some help and protection. Wirfs delivered some draw-dropping workouts last month.

Could the Los Angeles chargers jump the Dolphins—perhaps into the third or fourth slot—and steal Tagovailoa? It’s possible. But it’s even more likely that the former Alabama star falls into Miami’s lap at No. 5. When the Dolphins looked like the worst team in the NFL and Tagovailoa was healthy, “tanking for Tua” was a thing. The Dolphins didn’t tank…and they still might get him.

If the Chargers like Herbert as much as Tagovailoa, they could rest on their laurels and still get their QB of the future at No. 6. The former Oregon signal-caller has all the makings of a prototypical NFL quarterback. He could be able to help the franchise forget Philip Rivers sooner rather than later.

Okudah would be a steal at this point for a team that has a multitude of holes on defense. Yet another Ohio State product, Okudah has the size and speed to be a star cornerback at the next level in addition to the experience necessary to contribute right away.

If Wirfs is gone, Arizona will likely choose between Wills and Mekhi Becton. Or two of the top three offensive lineman could be gone, leaving head coach Kliff Kingsbury with an easy choice. Whatever the case, quarterback Kyler Murray needs more protection so he can run around like a wild man in the backfield.

Brown could go much earlier than this, perhaps even as high as No. 3 to Detroit. The Jaguars will be happy if that does not turn out to be the case. They finished 28th in the NFL in rushing defense this past season and the former Auburn interior lineman is a dominant run defender.

Becton turned heads at the combine by running a 5.10 in the 40-yard dash while registering at 6’7’’ and 364 pounds. You don’t see that kind of physical freakishness every day of the week—not even every five years, in fact. In a deep offensive line class, Cleveland will get at least someone it needs at No. 10.