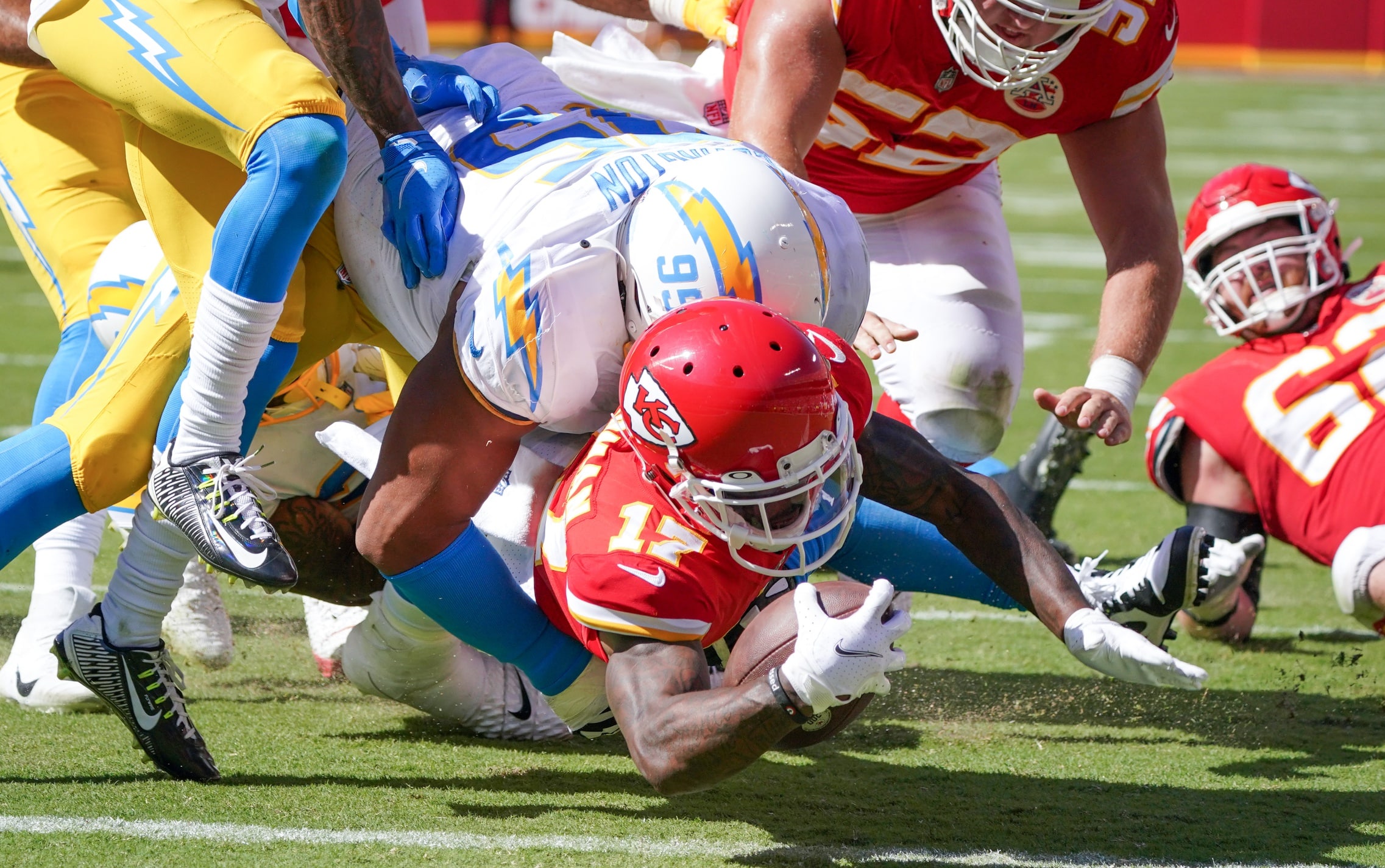 The 2021 NFL regular season is in full flow and every team has now played 3 games. That’s more than enough data for us to gauge who’s looking hot this year, and who looks destined for a high draft pick. One thing you can always get a slice of throughout the season is NFL futures bets.

After simulating the rest of the 2021 season 10,000 times and comparing each outcome’s probabilities to current consensus market prices, the model has picked its best and worst spots for value. Let’s dive in to the best NFL futures bets ahead of Week 4, as highlighted by our model.

The Raiders held the best value last week according to our computer model, and after Sunday’s overtime victory over the Dolphins to move to 3-0, it isn’t changing its mind. Sportsbooks cut their odds to +4100 to win the Super Bowl (from +5000) but our model suggests there’s still plenty of value to be had when comparing its prediction with the Raiders’ betting probability.

The Raiders are currently deemed as having a 1.9% chance of lifting the Vince Lombardi Trophy by most sportsbooks, but after running the simulations 10,000 times, our computer model suggests that Las Vegas actually has a Super Bowl win probability of 9.07%. That is down from the previous week’s probability of 9.55%, but still a difference of 7.16% when compared to their current odds! They are the biggest value by quite some way as well, with the Carolina Panthers still the team with the second-most value, but their difference is now 3.70%.

The Raiders’ odds are getting shorter — and will continue to do so if they keep winning games — but there’s still time to grab the value.

You can see the five teams with the best value for betting on the Super Bowl in the graphic below. 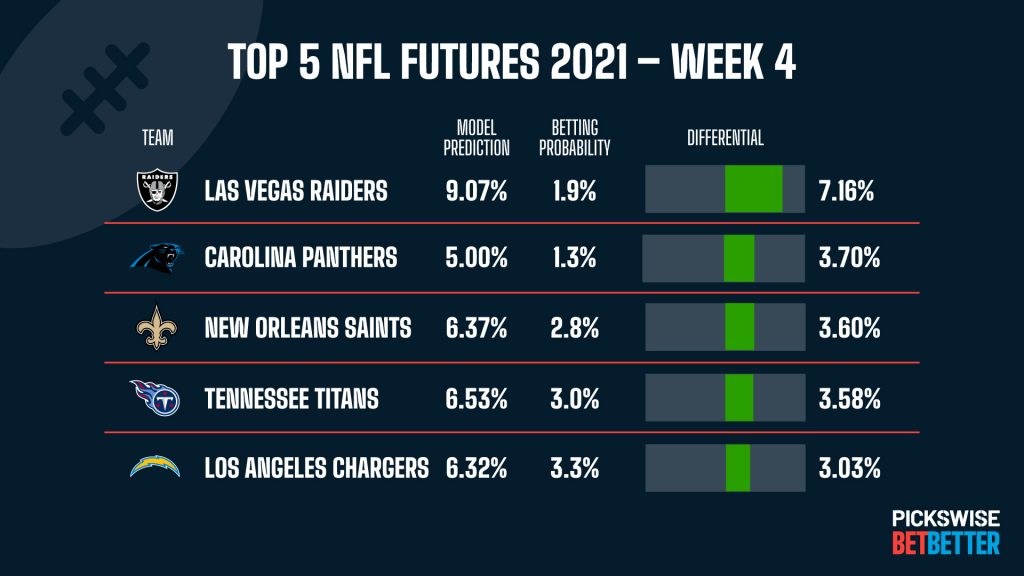 The Chiefs were also touted as the worst-value Super Bowl bet by our model last week, and hopefully you heeded its advice as Kansas City dropped their second game in a row against the Chargers. The Chiefs are now +600 to win it all and have an 11.5% betting probability of coming out on top in the Super Bowl. However, our model has them all the way down at 3.89% now (a drop of 4.49% from last week’s figure), and gives them a negative difference of -7.64% compared to the betting odds. According to our model, they now have a worse chance of winning the Super Bowl than teams such as the Cowboys, Browns, Broncos, and Saints.

The next two teams with the worst value are the Tampa Bay Buccaneers (-7.22% difference between betting probability and model prediction), and the team that defeated them, the Los Angeles Rams (-2.33%). You can see the breakdown for the five worst value Super Bowl bets below. 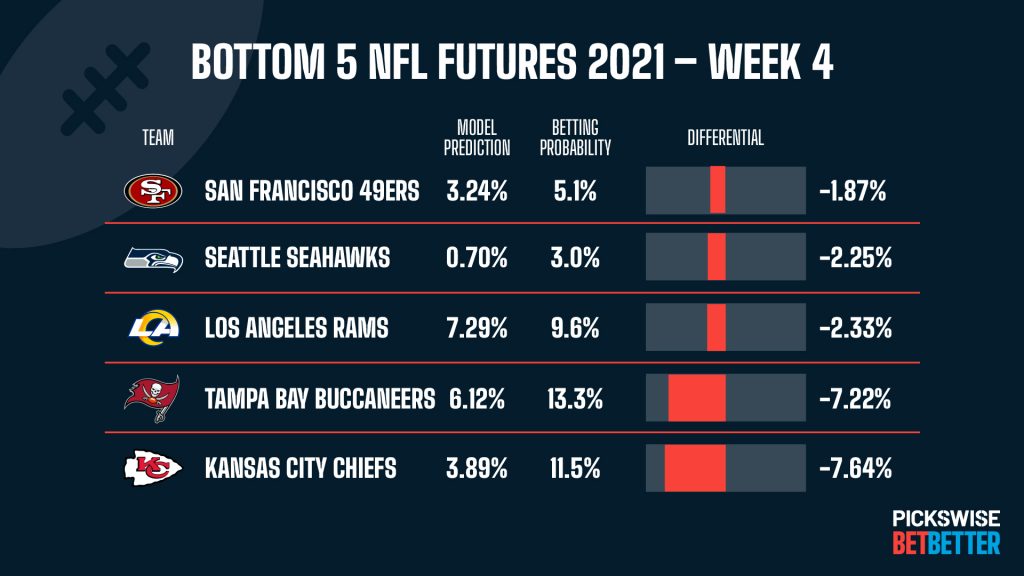 Getting that deja vu feeling? Once again, our model also touted the Giants under 5.5 at +100 as its best value regular-season wins total bet, and after falling to the Falcons on Sunday, it is almost going all in on them to have under 4.5 wins at -105.

At those odds, there is an implied probability that the G-men have a 51.2% chance of finishing with four or fewer wins, but our model’s simulations have actually found that there is a mammoth 95.1% chance of that happening — a difference of 43.9% compared to the betting odds!

The Giants play the Saints and Cowboys on the road next, and there could be more losses to come for Joe Judge’s men.

Other regular-season win total bets with the best value are the Washington Football Team under 6.5 wins at +115 (model suggests there is an 85.6% chance of that happening), and the New Orleans Saints over 9.5 wins at -115 (90.9% chance).