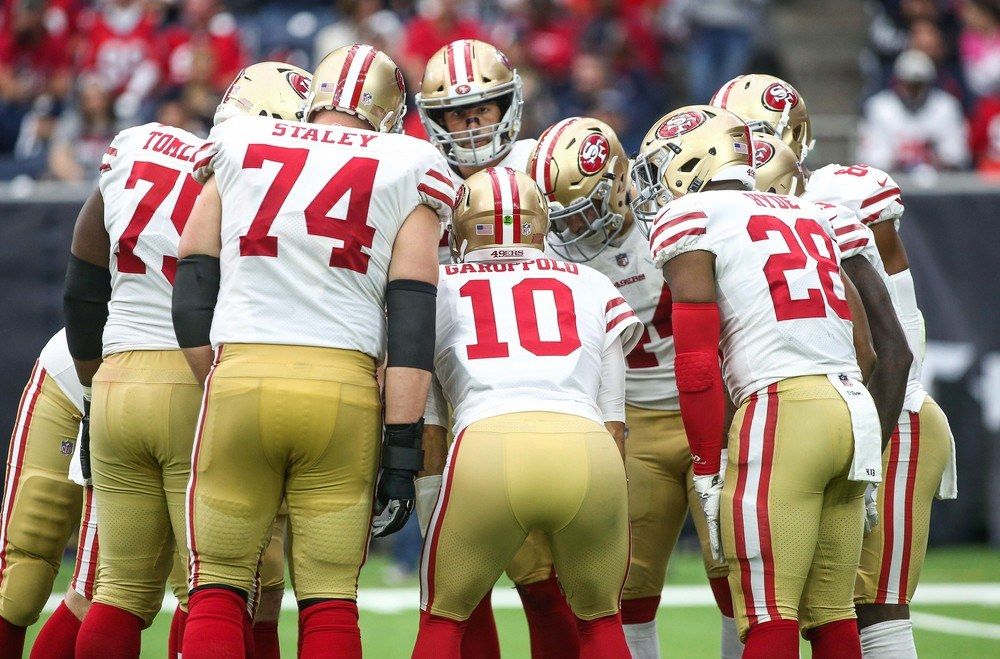 We’ve got a pivotal NFC West clash here on Sunday Night Football as the San Francisco 49ers host the Los Angeles Rams. It’s been smooth sailing for the Rams, while the 49ers have been besieged by injuries and are coming off an embarrassing blowout loss at the hands of the Dolphins. FanDuel’s sportsbook is now offering same game parlays, which are great because you can stack bets that are highly correlated and thus present value.

Today we’ll be breaking down our favorite such parlay for this Sunday afternoon game, which has the potential for a huge payout. You can also check out our full preview of the game which includes picks on the side and total.

A few of these plays are nicely correlated, and this is a great chance at a huge payout at nearly 27/1.

If this game had been played last week the 49ers would’ve been a solid favorite, and oddsmakers way overreacted to one bad game from San Francisco. Garoppolo wasn’t right for that game as he clearly wasn’t over his ankle issue, and the whole team should be a lot healthier now.

The Rams might be 4-1, but that record is pretty phony. Their four wins came against all the NFC East teams, by far the worst division in football. Those four wins came against teams with a combined record of 4-15-1. At 2-3 the 49ers will be the more desperate team here, and this should be an all-out effort.

I think this play is correlated nicely with the 49ers, because if San Francisco wins it means their defense stepped up. The secondary is finally starting to heal, as starting cornerback Emmanuel Moseley is going to make his return in this one. Jason Verrett has been playing really well recently, so they’ve now got a very solid duo again as they await the return of Richard Sherman.

This is still a division rivalry game with huge stakes for both teams, so I don’t think it’s going to turn into too loose of a shootout. The Rams’ offense has looked good but they’ve mostly gotten to go up against some very soft defenses, and this will be their toughest test yet. They’ve also already laid a couple of duds, like when they only put up 17 points on terrible Dallas and New York defenses.

This play is also pretty correlated, since if the 49ers win it means Garoppolo almost certainly had a bounce back game. In his only full game this season he had 259 yards, and that was a contest where he only completed 57.6 percent of his passes. The Rams have a few playmakers on defense, most notably Jalen Ramsey and Aaron Donald, but there are plenty of weak spots to target.

49ers coach Kyle Shanahan is a master at exploiting such weaknesses, and I think he’ll pick apart this below average Rams linebackers with passes to running backs and tight ends. The Rams’ defensive numbers are inflated by the fact they got to play the Giants and Washington the past two weeks. The last time they faced a real passing offense, the Bills three weeks ago, they let Josh Allen throw for 311 yards while averaging 9.4 yards per attempt.

If the 49ers win and Garoppolo has a good game, guess who probably had a huge day? George Kittle. None of the aforementioned Rams linebackers have a prayer of keeping up with Kittle, and Los Angeles gives up plenty of receptions over the middle of the field. When Shanahan thinks Kittle has a matchup he can exploit he really force feeds him, like when he gave him 15 targets two weeks ago against the Eagles, who also struggle to cover the middle of the field. Kittle finding the endzone is a good bet.