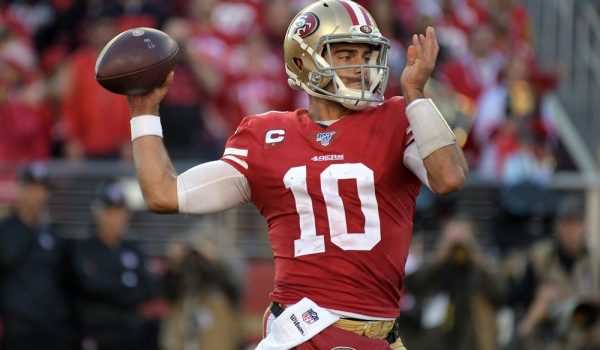 Along with the New England Patriots, the San Francisco 49ers are one of the many teams heading into the 2020 NFL season with the whole league watching them. Especially with the five primetime games on their schedule, can the 49ers bounce back from their Super Bowl loss? San Francisco lost some key players from their Super Bowl run including wide receiver Marquise Goodwin, running back Matt Breida, and defensive tackle DeForest Buckner.

Let’s see if the 49ers can continue to lead the NFC West as Pickswise takes a look at each game-by-game and predicts the outcome for the San Francisco 49ers this upcoming season.

The San Francisco 49ers open the 2020 season with a very favorable matchup against the Cardinals. Arizona might have DeAndre Hopkins now, but San Fran will not start the new season on a losing streak. Win

Another favorable matchup to start the season as San Fran heads into New York for their first road game. As long as QB Jimmy G continues to hand the ball off, it’s an easy win. Win

Talk about luck. San Fran will stay in New York over the week, to take on the Giants. The toughest matchup so far on the schedule will not seem as tough thanks to staying on the east coast as the tough 49ers defense takes one away from Daniel Jones. Win

Sunday Night football here as the 49ers will once again show why they are still one of the best in the West. I still have worries about the Philadelphia offense and how they will match up against the best in the NFC. Give me the 49ers in a close game. Win

The 49ers will stay at home to take on one of the youngest teams in the league. Miami might have an upward trending defense, but the offense will not get anything going against San Fran. Win

Everything is going right for the San Francisco 49ers as they are 5-0, best in the NFC, and take on rivals Los Angeles Rams. Los Angeles nearly took down the 49ers in primetime last season as Sean McVay will not allow the 49ers to continue to increase their lead over fellow NFC West teams. Rams in a close one. Loss

QB Jimmy G returns to New England to take on the mastermind of Bill Belichick. Bold Prediction, Jimmy throws four touchdowns and shows off he can be passing QB in this league. Win

Playing Seattle is no easy task. San Francisco has played well against Seattle as of late but back to back road games against the Patriots and Seahawks might be too tall of a task for them to sweep. Loss

The Packers organization has this game circled for revenge as the 49ers completely embarrassed Green Bay twice last season. Well, it will be three times in a row as the Packers still did not address helping QB Aaron Rodgers. Win

George Kittle is a very famous name in New Orleans as he destroyed the Saints with one single play late in the 4th quarter last season. New Orleans turns the table as Drew Brees has an outstanding game. Loss

Los Angeles stole one from San Francisco earlier this mock prediction, as the opposite will happen in Week 12. The 49ers and their fans will show up in the new stadium (if allowed) and beat the Rams. Win

I recently wrote in the Arizona Cardinals game-by-game predictions that facing the Buffalo Bills late in the season will not be fun one bit. With Buffalo hopefully on the verge of capturing the AFC East for the first time in years, they will be fired up to take down a top team. Loss

Washington has way too many questions on both sides of the ball as San Francisco should be able to win this game. Expect one of those 200 total rushing yard performances by the Niners offense. Win

Another tough team to play on the road and in primetime. Dallas is hungry late, but the NFC West being one of the toughest divisions in football will push the 49ers to open the playbook to clinch. San Francisco gets a huge win on the road. Win

Week 16 the San Francisco 49ers will clinch the NFC West. Arizona might make a late surge, but with the NFC West crown on the line, the Niners push back on Arizona and sweep them. Win

Could Week 17 decide the NFC West? It may very well again, but I expect the 49ers to clinch the West prior and sit this one out as Seattle squeezes into the playoffs. Loss

Taking an early look at the 2020 San Francisco 49ers season, I have them finishing with a 11-5 record. In 2019 they finished with a 13-3 record and finished first in the division. In 2020, I expect them to have the same edge in the West as they make yet another strong push in the playoffs.

NFL 16 days ago
Does Seattle’s trade for Jamal Adams change the balance of power in the NFC West?