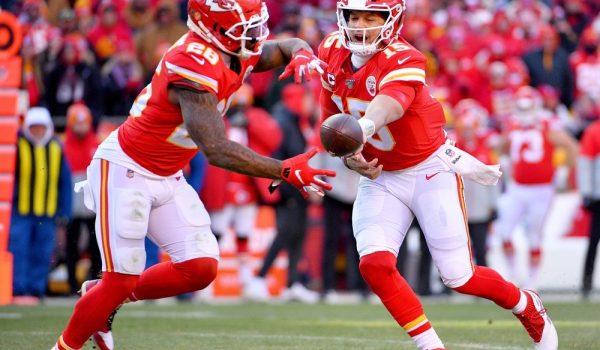 DraftKings has a tighter salary construct compared to FanDuel this weekend. As a result, we are going to have to pick and choose the spots we attack as we aren’t going to be able to put all big names in our cash game or GPP lineups. I will give my top two plays in cash game and the route I will go as far as a salary saver in cash game lineups. I will also provide the under the radar plays for GPP contests on DraftKings for Super Bowl Sunday’s Showdown Slate. Let’s begin by looking at the cash game lineup for this week’s action in NFL DFS.

Patrick Mahomes in the Captain Spot on DraftKings

It’s pretty simple; in cash games on DraftKings, you have to put one of the quarterbacks in the captain spot. For me this week, the choice is easy; you have to use Mahomes in the spot. The Chiefs are our Super Bowl Pick on Sunday, and Mahomes is our pick for Super Bowl MVP. He may not go over the 304.5 yards passing prop, but I still look for him to post massive numbers.

A player that I am eyeing for my cash game lineups on DraftKings is Sammy Watkins. I look for the Chiefs to continue to win via their passing game, and Watkins has been a reliable option in the playoffs for the Chiefs. He enters this game leading the Chiefs in receiving yards in the playoffs with 190 yards and is in a tie for 2nd with Damien Williams for passing targets. Watkins also has a 75% catch rate, so he has been a reliable receiver. I look for Watkins to be one of the better cash saving options this week on the Showdown Slate.

The Chiefs should be able to move the ball against the 49ers this week, given the offensive weapons they possess. However, the 49ers have one of the best red-zone defenses in the NFL, so if the Chiefs get down in the red-zone, they may be forced to kick more field goals than we are used to seeing from the offense. As a result, I look for Butker to produce value in cash games on Sunday, and he is another cash saving option that could go off.

In GPPs, you have to differentiate your lineup and sometimes go off the wall with picks to take down the big prize. As a result, you cannot play a quarterback in your captain spot, and I would avoid stacking my team with Chiefs as they are going to be popular picks. Instead, I would go with the game script of the 49ers having to pass and the Chiefs being up big and eating up clock by running the ball in the Super Bowl. So, with that being said, let’s take a look at my GPP lineup construct.

Deebo Samuel in the Captain Spot

Deebo Samuel is unlikely to be more than 10% used in the captain spot this week in GPPs. However, I think he is one of the best ways to differentiate our lineups this week. Samuel’s salary is only $11,400 in the captain spot, and that gives up room to add expensive players in the rest of our lineup.

Damien Williams because the Chiefs are Up Big

If the Chiefs go up big against the 49ers, then I look for them to utilize the clock more by running the ball. Williams has been dominant in the playoffs this year, rushing for 92 yards and three touchdowns while adding seven receptions for 65 yards and a touchdown. I like him this week as he will likely be low owned in all formats.

With GPPs, you have to stack in the showdown slate, and since I am rolling with the 49ers passing attack, Garoppolo is my quarterback of choice. You are unlikely to find enough room to use both Mahomes and Jimmy G this week, so I would suggest going with Jimmy G in GPPs for Super Bowl Sunday.

Check out our Super Bowl homepage ahead of making your Super Bowl LV Fantasy Picks. With expert analysis on the best Super Bowl Prop Bets as well as our Super Bowl Computer Picks, which include individual player performance predictions, here at Pickswise, we have it all.

NFL 13 days ago
Who will trade for Carson Wentz? Odds, best bets and predictions

NFL 16 days ago
$55 Million Challenge – Play For A Free Instant Prize Of Up To $25k During The Big Game!